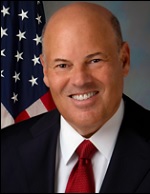 The first thing you need to know about the right-wing Cato Institute is that it quietly began its life as the Charles Koch Foundation in 1974. The name was changed to the Cato Institute in 1977 according to the restated articles of incorporation. For decades, the Cato Institute enjoyed a taxpayer subsidy as a nonprofit while being secretly owned by a handful of men, two of whom were the fossil fuel billionaire brothers, Charles and David Koch – libertarians with a radical agenda. (David Koch died in August of last year.)

The second thing to know about the Cato Institute is that over the past 35 years, Koch-related foundations have pumped more than $22 million into its coffers to help Cato get out its messaging of killing off the following: Social Security; federally-subsidized school lunches; the minimum wage; collective bargaining; and, of course, the unionized U.S. Postal Service.

In 2009, the Cato Institute hired the powerful corporate lobbyist firm, Patton Boggs, to file its Amicus brief in the Citizens United case at the U.S. Supreme Court, arguing in favor of loosening restrictions on corporate spending in campaigns. The 5-4 decision in that case opened the spigots to corporate funding of political campaigns in 2010. Democracy in the U.S. has been on the skids ever since.

Given that background, it’s only natural that the current attack on the U.S. Postal Service would have the dirty fingerprints of the Cato Institute all over it. Despite Gallup polls and the 2020 Pew Research poll that found that the U.S. Postal Service enjoys the approval of the vast majority of Americans, the Cato Institute has denigrated it in essays, testimony to Congress and opinion pieces in the press for decades and called for its privatization. Those efforts were stepped up in the past two years.

A year earlier, Edwards was testifying before the House Oversight Committee on how “Congress should privatize the USPS” and “allow entrepreneurs to compete in the postal industry.” (It should be noted that UPS and FedEx are already major competitors.) Edwards holds a Masters in Economics from George Mason University, another outpost of massive amounts of Koch money.

Cato’s unending bashing of the U.S. Postal Service and efforts to see it privatized date back at least 35 years. Before Edwards, Cato’s attack dog was James Bovard. In 1985, Bovard wrote that the Postal Service was “a dinosaur” and “probably the worst managed and one of the least honest corporations in America.” (Seriously?)

In 1988 Bovard called for an end to the Postal Service “monopoly,” writing that “Once the monopoly is abolished, the Postal Service’s revenues will collapse, and then it will be forced to react after public demonstration of its incompetence.” In 1991, Bovard was back on the attack again, writing that “Postal Service officials perennially proclaim they are a public service — even as they repeatedly slash service to the public.” (In truth, according to the U.S. Postal Service’s 2019 Annual Report, on a typical day, it physically processes and delivers “471 million mail pieces to 160 million delivery points.”)

One of the ongoing tropes from Cato is that the U.S. Postal Service is losing billions of dollars a year. What is rarely explained in any detail is how the Postal Service was set up to fail. Last year, researchers Sarah Anderson, Scott Klinger, and Brian Wakamo published a paper at the Institute for Policy Studies explaining the problem as follows:

“In 2006, Congress passed a law that imposed extraordinary costs on the U.S. Postal Service. The Postal Accountability and Enhancement Act (PAEA) required the USPS to create a $72 billion fund to pay for the cost of its post-retirement health care costs, 75 years into the future. This burden applies to no other federal agency or private corporation.

“If the costs of this retiree health care mandate were removed from the USPS financial statements, the Post Office would have reported operating profits in each of the last six years. This extraordinary mandate created a financial ‘crisis’ that has been used to justify harmful service cuts and even calls for postal privatization. Additional cuts in service and privatization would be devastating for millions of postal workers and customers.

“In its December 2018 report, President Trump’s Task Force on the United States Postal Service reaffirmed current rules related to postal retiree health benefits, calling it ‘part of a mandate for postal self-sustainability.’ However, the Task Force also recognized that the aggressive and accelerated timetable for funding the mandate has proved unworkable. They call for past deficits to be ‘restructured with the payments re-amortized with new actuarial calculation based on the population of employees at or near retirement age.’

“While this would have a modest positive effect by spreading payments over a longer period of time, it does little to address the underlying problem caused by USPS being burdened with a mandate that no other federal agency or private corporation faces.”

The researchers provide a list of changes that Congress can make to put the Postal Service on better financial footing going forward. Those include: repealing the retiree health mandate and allowing the USPS to “use accumulated post-retirement reserves to fund future pay-as-you-go costs”; basing mandated post-retirement health care reserves on actual vested liability, “not on ‘total projected liability’ as they are now.” The researchers note that “this is the difference between allowing a credit card holder to pay the charges they accrue each month, rather than requiring them to create a holding account for all of the expenses they expect to charge over a lifetime”; allowing Medicare integration to “relieve the Postal Service of some of its unfunded liability for retiree healthcare benefits”; and eliminating the requirement that all of the retirement assets of the USPS are invested solely in U.S. Treasury Bonds. (Now that interest rates have been artificially manipulated to historic lows by the Federal Reserve, naturally Wall Street will benefit by having every retirement plan in the country moving increasing amounts into the stock market.)

The U.S. postal system predates the creation of the country by one year. It was created in 1775 with Benjamin Franklin appointed first Postmaster General by the Continental Congress. You can browse through its amazing history with heirloom photos here.

The mission of the U.S. Postal Service is codified in Title 39 of the U.S. Code. That is stated as follows:

“(b) The Postal Service shall provide a maximum degree of effective and regular postal services to rural areas, communities, and small towns where post offices are not self-sustaining. No small post office shall be closed solely for operating at a deficit, it being the specific intent of the Congress that effective postal services be insured to residents of both urban and rural communities.

“(c) As an employer, the Postal Service shall achieve and maintain compensation for its officers and employees comparable to the rates and types of compensation paid in the private sector of the economy of the United States. It shall place particular emphasis upon opportunities for career advancements of all officers and employees and the achievement of worthwhile and satisfying careers in the service of the United States.

“(d) Postal rates shall be established to apportion the costs of all postal operations to all users of the mail on a fair and equitable basis.

“(e) In determining all policies for postal services, the Postal Service shall give the highest consideration to the requirement for the most expeditious collection, transportation, and delivery of important letter mail…”

The above is just an excerpt of the complete statute. However, reading this part of the law it becomes rather clear why the new Postmaster General, Louis DeJoy, (a big donor to President Donald Trump) issued a statement yesterday, rolling back his plans that have sparked a public outcry:

“To avoid even the appearance of any impact on election mail, I am suspending these initiatives until after the election is concluded. I want to assure all Americans of the following:

“Mail processing equipment and blue collection boxes will remain where they are.

“No mail processing facilities will be closed.

“And we reassert that overtime has, and will continue to be, approved as needed.”

The public will get to hear more about the matter this Friday when the U.S. Senate’s Homeland Security and Governmental Affairs Committee holds a hearing, with DeJoy slated to testify. Then, next Monday, the House Oversight and Reform Committee will hear from DeJoy and Robert M. Duncan, the Chairman of the Board of Governors of the Postal Service.

The House Oversight and Reform Committee is chaired by Democrat Carolyn Maloney of New York. She released this statement after DeJoy backtracked on the changes that were occurring at the Postal Service in the midst of an upcoming presidential election and during a pandemic:

“It should not have taken the Postmaster General this long to recognize that his actions were causing major delays—in rural and urban communities, and among veterans, seniors, and families across the country. His announcement today is certainly necessary, but it is inadequate to remedy the damage already done and ensure ballots will be delivered on time this November. Every single Member of the House should vote in favor of our legislation this coming Saturday. Our bill will do two things: it will restore previous delivery standards and operations throughout the coronavirus crisis, and it will give the Postal Service the funding it needs to ensure that mail, medicines, and mail-in ballots are delivered in a timely way.”

The House Committee announced that it “expects the Postmaster General to produce documents and information by this Friday’s deadline in response to a detailed, ten-page letter sent last week by Chairwoman Maloney, House Speaker Nancy Pelosi, Senate Democratic Leader Chuck Schumer, and Chairs and Ranking Members of the Committees with jurisdiction over the Postal Service and federal elections.”

DeJoy’s flipflop on changes comes also after news that 20 state attorneys general are heading to court this week to challenge his actions.