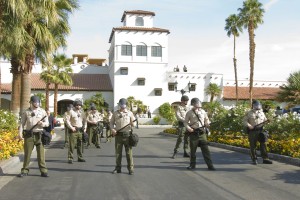 Charles Koch is the Chairman and CEO of the fossil fuels giant, Koch Industries, ranked by ValueWalk as the second largest private corporation in America. Forbes puts his net worth at $45 billion. While Koch Industries has sprawling holdings in pipelines and refineries, in 2005 it bought the paper and lumber company, Georgia-Pacific. That Koch Industries’ division relies on the goodwill and trust of consumers in order to achieve billions of dollars in revenues for its Dixie disposable paper plates, bowls and cups; its Northern Quilted and Angel Soft bath tissue; its Brawny and Sparkle paper towels; and its Vanity Fair and Mardi Gras table napkins.

The perception that Charles Koch, the man who has sat atop Koch Industries for more than half a century, is attempting to subvert the will of American voters on behalf of his fellow billionaires by untoward meddling in elections has gained traction in recent years. That’s a big problem for a company that needs a warm and fuzzy image in order to sell its household product brands.

The Koch political machine and its decades of sneaky dealings had its dark curtain yanked back in the August 30, 2010 issue of The New Yorker in a sweeping expose by Jane Mayer. Back then Charles, and his brother David, were known simply as “the Koch Brothers,” or the Kochtopus, in a nod to the array of nonprofit front groups they had created. (David died in August of 2019.) Mayer noted that studies had dubbed Koch Industries “one of the top ten air polluters” in the United States and “a kingpin of climate science denial.”  Mayer wrote that the “Kochs vastly outdid ExxonMobil in giving money to organizations fighting legislation related to climate change,” and had underwritten “a huge network of foundations, think tanks, and political front groups,” that were funding opposition campaigns against a multitude of Obama administration policies – “from health-care reform to the economic stimulus program.”

In October of 2010, we took a look at the dizzying array of front groups that had been spun out of Americans for Prosperity, one of the nonprofits of the Koch machine and the billionaire money propping up their agenda. In the same month, we broke the story that a secretive organization that does not reveal its donors, Donors Capital Fund, which had Charles Koch’s fingerprints all over it, had financed a race-baiting film in 2008 as Barack Obama became the first black Democratic candidate for President of the United States. The secretive group handed over $17 million to produce 28 million DVDs of this race-baiting film and approximately 100 newspapers and magazines in the U.S. obligingly stuffed the DVD into their newspaper as a free giveaway seven weeks before the presidential election. Those newspapers included the New York Times, Wall Street Journal, Miami Herald, Philadelphia Inquirer and St. Petersburg times. (Read our in-depth report here.)

In 2011 we broke the news that Charles Koch and his wife had wined and dined a sitting Justice of the U.S. Supreme Court, Clarence Thomas, at their private club in Indian Wells, California, the same year that the notorious Citizens United decision was accepted to be heard before the U.S. Supreme Court. The Supreme Court at that time accepted less than two percent of cases appealed to it. The 5-4 Supreme Court decision in the case opened the floodgates to corporate money in U.S. elections. Four of the nine Justices on the court issued a scathing dissent that suggested the decision didn’t pass the smell test and raised the question of unethical behavior on the part of the 5-judge majority which had ruled on issues that they said were not legally before the court.

Also in 2011 we broke the news that prominent commentators on TV had quietly been receiving large sums of money from Koch-funded groups. One of those was Larry Kudlow, now Trump’s Chief Economic Adviser. We also exposed a network of right-wing “news” outlets that were being funded by the Koch network of donors.

In 2012 we wrote about how the right-wing Cato Institute, which had been spewing out right-wing policy goals for decades, had secretly been owned by a handful of men, two of which were Charles and David Koch. How can a taxpayer-subsidized nonprofit be secretly owned? If you’re rich enough, anything is possible in Koch’s America.

In 2018 we broke the news that Koch Industries actually owned a company called i360 that was engaging in voter data mining to benefit right-wing candidates in the 2018 midterm election and was running help-wanted ads to hire computer wizards. We wrote at the time: “The ad for the Senior Data Scientist defines part of the job as this: ‘Develop and apply models that predict individuals’ propensity to engage in a behavior or hold a particular viewpoint.’ An ad for Automation Engineer makes it clear the job applicant will be deployed in this year’s election, writing: ‘…your work will be at the center of driving voter engagement in the upcoming campaign cycle and beyond.’ ”

How can it be legal for a privately-owned fossil fuels industrial giant to engage this brazenly in U.S. elections? You can thank five judges on the U.S. Supreme Court.

In 2016, Jane Mayer blew more Koch secrets out into the open with her riveting book: “Dark Money: The Hidden History of the Billionaires Behind the Rise of the Radical Right.” And just last year, business writer Christopher Leonard released a 700-page tome titled: “Kochland: The Secret History of Koch Industries and Corporate Power in America,” putting to rest any doubt that the Kochs had played a key role in climate change denial groups.

Amidst all of this bad publicity, Charles Koch decided to launch a massive public relations campaign. Part of that effort includes a nonprofit called StandTogether.org. A video from the group has Charles Koch telling viewers this:

“Stand Together opposes when business lobbies government for special favors and rigs the system to protect their profits. This wastes resources, disrespects customers, and is unfair to taxpayers.”

We don’t understand how the Chairman and CEO of Koch Industries could utter those words with a straight face. According to the Center for Responsive Politics, Koch Industries has spent $139 million since January 1, 2008 lobbying the federal government. The Center reports that the company currently has 26 lobbyists employed.

One of the Koch-related groups that was active in recent elections is Freedom Partners, which was organized as a 501(c)(6) tax exempt organization and did not have to reveal its dark money donors to the public. It also had a related Super Pac, Freedom Partners Action Fund, which does have to reveal its donors. Charles Koch and his trust gave $14 million to the Super Pac from 2014 through July 2018 according to the Center for Responsive Politics. The Super Pac ran attack ads on television against Democrats in election years. Time Magazine’s Philip Elliott reported in January 2017 that “In seven of the eight up-for-grabs U.S. Senate races last year, the Koch-backed candidate won. In all, Koch-backed candidates at all levels of races prevailed 96% of the time—a record any outside group would covet.”

When we examined the Board of Directors of Freedom Partners in 2018, this is what we found:

“All but one of Freedom Partners’ 9-member Board of Directors is a current or former Koch company employee. The Board Chair is the same Mark Holden that is the General Counsel of Koch Industries.”

In May of last year, the Washington Post reported that Freedom Partners had been wound down. Federal Election Commission (FEC) records for Freedom Partners Action Fund shows that on June 28, 2019, it transferred $6.48 million in two separate deposits into the Americans for Prosperity Action Fund, the Super Pac related to the nonprofit Americans for Prosperity (AFP), where the Koch network says it has centralized its political activities.

AFP is a dark money group that runs attack ads against Democrats and ads to promote Trump’s judges. It has received funding from Koch family foundations and other unknown sources. According to SourceWatch, its 2018 budget was $96.5 million.

FEC records also show that Koch Industries has directly contributed $5 million to the Americans for Prosperity Action Fund for the 2019-2020 cycle thus far, making it the second largest donor just behind the Freedom Partners Action Fund.

Charles Koch’s Stand Together website suggests that it wants a more united America and a more nonpartisan approach. But FEC records show Koch Industries has donated $750,000 in the 2019-2020 cycle thus far to the Super Pac known as the Senate Leadership Fund. The website for the Senate Leadership Fund says “it has one goal: to protect and expand the Republican Senate Majority…” We found no such comparable Koch Industries donation to any Senate fund for Democrats.

FEC records also show that Koch Industries has donated $500,000 in the 2019-2020 cycle thus far to the Congressional Leadership Fund. SourceWatch reports that it’s a SuperPac dedicated to strengthening the Republican Majority in the House.