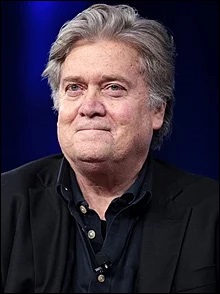 One of the key right-wing architects of Donald Trump’s 2016 presidential campaign, Stephen K. (Steve) Bannon, was arrested early yesterday morning while cruising in the Long Island Sound on a 150-foot yacht owned by the fugitive Chinese billionaire, Guo Wengui, according to law enforcement officials. Bannon had served as CEO of Donald Trump’s 2016 presidential campaign and as senior counselor and chief strategist to the president for the first seven months of his term.

Bannon, along with three others, were charged with defrauding donors in a $25 million fundraising scheme called “We Build the Wall.” The plan was originally described as money to support President Trump’s efforts to build a wall on the southern border with Mexico but was later changed to a privately-funded project to build a wall.

Some of the money did actually build a segment of wall. Hundreds of thousands of dollars, however, were diverted to Bannon and others, despite repeated written promises to donors that they were “volunteers” and would receive no compensation, according to federal prosecutors.

The three others charged in the matter were Brian Kolfage, Andrew Badolato, and Timothy Shea. The prosecutors have text messages between the defendants showing how they plotted to skim off the money. Read the Justice Department’s indictment here.

Bannon pleaded not guilty yesterday and was released on a $5 million bond that restricted his travel.

During an unrelated press conference yesterday, President Trump said he had no knowledge of the wrongdoing and wasn’t involved in the project. A YouTube video appears online, however, showing Donald Trump Jr. at an event for the project last summer where he praises it as: “Showing what capitalism’s all about. This is private enterprise at its finest – doing it better, faster, cheaper than anything else.”

That statement goes to the heart of the right-wing billionaires in the Charles Koch network that funded Trump’s campaign for the presidency; elevated Steve Bannon as a guru strategist to the campaign; and used their sprawling octopus of right-wing nonprofit front groups to amplify the message that big government is bad while unleashed and unregulated capitalism can make America great again. (How’s that working for you so far?)

Koch Industries, of which Charles Koch has been Chairman and CEO for more than a half-century, is a fossil fuels juggernaut which stands to financially benefit from gutting environmental laws and downsizing the prying eyes of government. Koch has used nonprofit front groups in furtherance of that mission for at least four decades.

In November of 2017, the respected watchdog, Public Citizen, reported that 44 Koch allies are staffing the White House and other agencies. And as we have reported at Wall Street On Parade, that’s on top of the 12 lawyers from Jones Day, Koch Industries’ long-time outside law firm, who all took their seats in the Trump administration on January 20, 2017 – the very day Trump was sworn into office.

In the very early days of the Trump administration, the Koch nonprofit front group, Freedom Partners, quickly provided a list of regulations it wanted gutted – like the Paris Climate accord (which Trump revoked on June 1, 2017) and numerous EPA rules – and threatened those lawmakers who didn’t get on board, writing that “Freedom Partners will hold lawmakers who oppose regulatory relief accountable for their positions.” That means that they will run a challenger against them in the next Republican primary.

When we wrote about the nonprofit Freedom Partners in July of 2018, eight of the nine members of its Board of Directors was a current or former Koch company employee.

Another billionaire involved in elevating Trump to the White House with more links to Bannon and nonprofits was Robert Mercer. According to publicly available records of the Mercer Family Foundation filed with the IRS, the nonprofit organization, Government Accountability Institute (GAI), received $5,750,000 from the Mercer Family Foundation from 2013 through 2016. GAI was founded in 2012 by Peter Schweizer and Steve Bannon. Schweizer authored the book, Clinton Cash: The Untold Story of How Foreign Governments and Businesses made Bill and Hillary Rich. The book was released in 2015 and dogged Hillary Clinton throughout her presidential run. Bannon produced a documentary based on the book and released it in 2016 during her presidential campaign. The film lists Schweizer and Robert Mercer’s daughter, Rebekah, as Executive Producers, which typically means the money behind the film.

The Mercer Family Foundation has also donated millions of dollars to Citizens United, the organization that brought the U.S. Supreme Court case that unleashed unlimited corporate spending in elections. Citizens United also sent three of its top strategists to run the Donald Trump campaign in its floundering days of 2016.

Bannon was the long-tenured filmmaker for Citizens United, making right-wing propaganda documentaries like “Fire from the Heartland,” a glowing tribute to Michele Bachmann; “The Undefeated,” profiling the rise of Sarah Palin to national prominence and portraying her as the darling of the Tea Party movement; “Generation Zero,” blaming the 2008 financial crash on liberals instead of the Wall Street bank executives who presided over the unprecedented frauds; “Occupy Unmasked,” characterizing the young people attempting to remove their democracy from the iron grip of the one percent as sinister criminals; and “The Hope and the Change,” showing Democrats’ disillusionment with the campaign promises of Barack Obama.

A SuperPac funded by Robert Mercer, Make America Number 1, was also funneling money to Steve Bannon, according to election complaints filed in 2016 by the Campaign Legal Center (CLC). The complaint alleged the following:

“Specifically, CLC’s complaint alleged that Make America Number 1 appeared to have paid compensation to Trump campaign CEO Stephen K. Bannon (now White House chief strategist) via payments to the firms Glittering Steel LLC and Cambridge Analytica, which are incorporated at the same address as Bannon’s consulting firm and closely associated with him. These payments constitute in-kind contributions to Donald J. Trump for President, Inc. from Make America Number 1 in the form of compensation for personal services rendered to the campaign.  U.S.C. § 30101(8)(A)(ii)…

“CLC’s October 6 complaint also described how the data firm ‘Cambridge Analytica’ is registered at the same address as Bannon’s consulting firm, Bannon’s Glittering Steel LLC, and Bannon’s “Breitbart News” holdings, and that Bannon is on Cambridge Analytica’s board, as is Robert Mercer, who funds Make America Number 1.

“Make America Number 1 has paid at least $4,633,876 to Cambridge Analytica since Bannon joined the Trump campaign: $411,763 in August, $886,133 in September, $1,935,980 in October and $1,400,000 between November 1 and November 4. These payments to a firm associated with Bannon provide additional reason to believe that Make America Number 1 may have subsidized the Trump campaign CEO’s compensation.”

As the United States and its citizens struggle with the worst pandemic in a century and the worst financial crisis since the Great Depression and the lowest confidence in many of the key institutions of government in history, there may be some small comfort in knowing that Steve Bannon’s Long Island Sound yachting adventure was cut short by federal prosecutors.

But what about all of those other nonprofits allowed to stick their finger in the eye of representative government?

There may be another shoe to drop in this saga. The indictment mentions a nonprofit controlled by Bannon that was involved in funneling the defrauded money just as “non-profit-1.” Why not use the full name of the organization? Let’s hope this means there is a continuing investigation.

And, finally, the indictment was brought by the U.S. Attorney’s Office for the Southern District of New York. That’s the office where Trump’s Attorney General William Barr abruptly decided to fire its head guy, Geoffrey Berman, this past June. Fortunately for all of us, Berman threw a wrench in the plans of Barr to bring in an outsider to run the office. Berman succeeded in getting his Deputy, Audrey Strauss, named as the Acting U.S. Attorney for the office. Strauss is the person who brought the case against Bannon and the other three defendants yesterday.