After 92 Years, Exxon Is Booted from the Dow Jones Industrial Average: A Nod to Sustainable Energy? 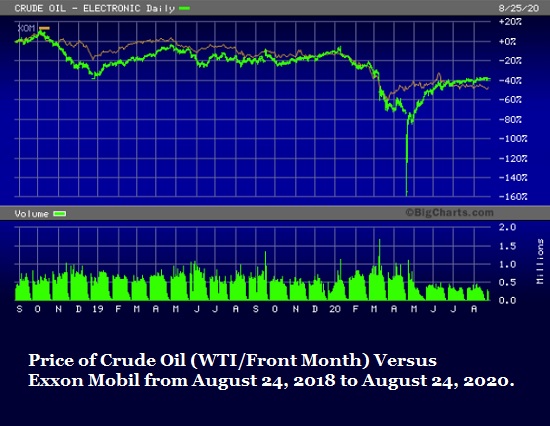 Yesterday, S&P Dow Jones Indices made the stunning announcement that Exxon Mobil, which has been in the Dow Jones Industrial Average for 92 years, will be replaced in the index before trading begins next Monday, August 31, by Salesforce, a company that went public in 2004. (Exxon Mobil became a component of the Dow in 1928 under the name Standard Oil of New Jersey.)

“The index changes were prompted by DJIA constituent Apple Inc.’s decision to split its stock 4:1, which will reduce the index’s weight in the Global Industry Classification Standard (GICS) Information Technology sector. The announced changes help offset that reduction. They also help diversify the index by removing overlap between companies of similar scope and adding new types of businesses that better reflect the American economy.”

Translation: we expect Exxon Mobil to be a drag on our index for a long-time, along with the price of crude oil. Since we already have Chevron dragging down the index, we’re booting out the other major oil component, Exxon Mobil. This could also be a wager that alternative forms of energy, that do not include fossil fuels, is where the world is moving, as well as the outlook for slower global growth that would require lower energy demand.

The Dow Jones Industrial Average has a quirky model. It is a price-weighted index rather than a market cap-weighted index. This means that the more expensive the share price of the company, the heavier the weighting it gets in the Dow. And, the heavier the company’s weighting in the Dow, the more its share price impacts the overall price level of the Dow.

Apple’s stock price closed yesterday at $503.43, making it the priciest stock in the Dow and, thus, the heaviest influencer of where the Dow itself closes. But when its 4-for-1 split becomes effective on Monday morning, August 31, Apple’s share price will be approximately one-quarter of where it closes on Friday, barring any major price moves at the opening of the market. Because Apple’s share price will be so much cheaper come Monday, its influence in the Dow will also wane as a result. Thus, there would appear to be an inclination to move laggards out and put some sexier names in the Dow to buttress its overall performance.

As the chart above indicates, Exxon Mobil has lost over 40 percent of its share price in the past two years, about in line with the price of crude. With slowing global growth and emphasis on sustainable energy, an oil major is not a sexy stock these days.

Salesforce, on the other hand, is sexy. Despite just going public in 2004, its market cap (value of all of its publicly-traded shares) is $187.82 billion as of yesterday’s close. That’s $9.3 billion more than Exxon Mobil’s market cap – a company founded as Standard Oil of New Jersey in 1882.

Chances are, unless you’re a stock trader, you’ve never heard of Salesforce and have no idea what it does. Even if you are a stock trader, you are still probably confused as to exactly what Salesforce does and what makes its shares so highly valued. The simple explanation is that Salesforce is a cloud-based software company that helps other companies computerize their sales and marketing operations to, ideally, generate higher profits and more satisfied customers. These kinds of companies, to which there are little barriers to entry (something that is typically viewed as a negative on Wall Street) are called CRMs or customer relationship management companies. Salesforce had the keen sense to grab the stock symbol, CRM, for its shares.

For more on what Salesforce does, you can read this very bullish overview at TheStreet.com. Salesforce’s business model includes making money on hot IPOs of other technology companies. (See here.) That strikes us as a bit weird. If one’s core business model is so successful, why does one have to be gambling in the stock market?

Who were the invisible hands that decided to make these changes in the Dow Jones Industrial Average? According to the website of S&P Dow Jones Indices, a division of S&P Global, this is how it works:

“Indices are governed by an Index Committee. Most committees are comprised of full-time professional members of S&P DJI staff, with the exception of some co-branded indices, which may include committee members from external companies or exchanges. Please refer to individual index methodology documents for information on index committees with external index committee members. At each meeting, the Index Committee may review pending corporate actions that may affect index constituents, statistics comparing the composition of the indices to the market, companies that are being considered as candidates for addition to an index, and any significant market events. In addition, the Index Committee may revise index policies for selecting companies, treatment of dividends, share counts, or other matters.”

This chart shows when each company was added to the Dow Jones Industrial Average, dating back to 1928. The Dow was first published on May 26, 1896. At that time, it had only 12 stock components. It grew to its present 30 stocks in 1928.

General Electric, which was booted from the Dow on June 26, 2018, was one of the original 12 companies that made up the Dow in 1896. For more about that shakeup, see our report at the time: Removal of GE from the Dow Looks Suspiciously Like Citigroup’s Exit.