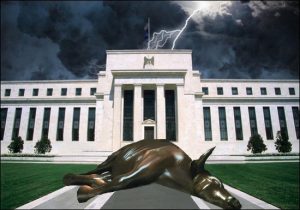 Beginning on September 17 of last year, months before the first COVID-19 case had been discovered anywhere in the world, the Federal Reserve – for the first time since the financial crisis of 2008 – jumped into the repo loan market, where financial firms borrow from each other overnight, and began making tens of billions of dollars in loans a week to the trading houses of Wall Street. The Fed calls these 24 trading houses its “primary dealers.”

For the vast majority of the Fed’s 107-year existence, it was limited to making loans to only commercial banks, which would assist the general U.S. economy by passing on those loans to businesses and consumers. Since the financial crisis of 2008, the Fed has become a money spigot to the Wall Street casino, based solely on its own interpretation of what it’s allowed to do.

The Fed’s emergency action on September 17 resulted from the fact that repo loans on that date had bizarrely spiked from 2 percent to 10 percent, strongly suggesting that one or more trading houses were in trouble and other financial firms were backing away from giving them loans.

The Fed releases weekly data each Thursday at 4:30 p.m. on its balance sheet holdings. It’s known as its H.4.1 report and shows balance sheet levels for Wednesday of that week. Yesterday, the Fed’s H.4.1 bizarrely showed a balance of zero for repo loans outstanding on Wednesday, July 9. To give you an idea of just how bizarre that zero figure is, here’s a rundown of how the Fed’s weekly repo loans grew from their inception on September 17.

In a one-month period, from September 18 to October 16 – the Wednesday level of repo loans grew from $75 billion to $197.7 billion outstanding. The Wednesday balance of outstanding repo loans hovered in the $200 billion range weekly through March 11 of this year. Then they skyrocketed.

From March 11 to March 18, the Fed’s repo loans increased from $242 billion to $442 billion outstanding. What could possibly explain such a massive surge in the demand for money from the Fed by the trading houses on Wall Street in one week’s time? There was a massive selloff in stocks triggered by spreading fears of the COVID-19 pandemic. The share prices of the biggest banks on Wall Street tanked, raising more alarm bells.

On Wednesday, March 11, 2020, COVID-19 was declared a pandemic by the World Health Organization. On Friday, March 13, 2020, the U.S. declared a National Emergency related to the pandemic.

And the situation is getting worse, not better. This headline is running this morning at Bloomberg Law: “Patients Swamp Sun Belt Hospitals With Covid-19 on a Rampage.” The report notes that “The coronavirus pandemic’s merciless march through the Sun Belt is killing record numbers of Americans there, overrunning hospitals and exhausting supplies…New U.S. virus cases topped 60,000 in a day for the first time Thursday, with the national total above 3.1 million. And in states where the disease rages, a nightmarish paralysis hit institutions filling with the sick and dying. Quinn Snyder, an emergency physician in Mesa, near Phoenix, said patients were flooding in from other parts of Arizona and as far as New Mexico as smaller hospitals near the saturation point.”

In the midst of such an escalating crisis, why would the Fed be retrenching rather than adding liquidity?

On March 14, using the Fed’s own daily data, Wall Street On Parade reported that the cumulative total of the Fed’s repo loans had topped $9 trillion. From Monday through Thursday of this week, the Fed has not made one repo loan of any size.

There are a host of reasons that the Fed could be taking this action but none of them are going to be good for the biggest Wall Street banks, which are surviving on the illusion that the Fed will provide an unlimited money spigot.

The Fed could be getting pushback from some of its Governors that it’s creating a dangerous stock bubble. It’s certainly been hearing that from the street, as we reported on June 18. The Fed could also be hearing from regional Fed presidents that the trillions it has pumped in super cheap loans to the trading houses, is not filtering down to save jobs or small businesses? (Why would anyone ever think it would? The only loans that trading houses make are margin loans to speculate in stocks or other securities.) The Fed could also be getting expert advice that the pain that it would inflict on markets attempting to eventually unwind a $7 trillion balance sheet will be a cure that is worse than the current disease.

We could go on and on with speculations but the reality on the ground is that, for some unknown reason, the Fed has applied the brakes. At least for now.