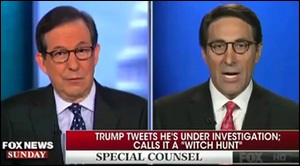 Jay Sekulow’s charities have been under a harsh glare for almost two decades for funneling vast sums to Sekulow and his family members. Now, one of those charities, the American Center for Law and Justice, has turned up on the Paycheck Protection Program (PPP) loan database that was released this week by the Small Business Administration. PPP loans were part of the CARES Act passed by Congress to help small businesses with no other source of funding stay alive during the pandemic.

According to the PPP database, the American Center for Law and Justice (ACLJ) received a loan of between $1 to $2 million. ACLJ is a nonprofit that lists Jay Sekulow as its CEO, Chief Counsel and Board Member, according to its 2018 public tax filing known as a 990.  Sekulow’s brother, Gary, is listed as Vice President of Finance, Chief Financial Officer, and Chief Operating Officer. Gary Sekulow’s son, Adam, is listed as the Director of Major Donors.

In January of this year, Michael Biesecker of the Associated Press reported that AP had “reviewed 10 years of tax returns for the ACLJ and other charities tied to Sekulow, which are released to the public under federal law.” The investigation showed that from 2008 to 2017, “more than $65 million in charitable funds were paid to Sekulow, his wife, his sons, his brother, his sister-in-law, his nephew and corporations they own.”

Unfortunately, no amount of media attention to this dubious charitable money funnel can seem to stop it.

A 2005 investigation by Tony Mauro of Legal Times reported that “in 2001 one of Sekulow’s nonprofit organizations paid a total of $2,374,833 to purchase two homes used primarily by Sekulow and his wife. The same nonprofit also subsidized a third home he uses in North Carolina.” Mauro further reported that “funds from his nonprofits have also been used to lease a private jet.”

In 2011, Bob Smietana, writing for USA Today, reported that just two of Jay Sekulow-related nonprofits, American Center for Law and Justice and Christian Advocates Serving Evangelism, Inc. (CASE) “have paid out more than $33 million to members of Sekulow’s family and businesses they own or co-own, according to the charities’ federal tax returns.” Smietana’s research included returns filed since 1998.

In an investigation conducted by Wall Street On Parade in 2013, we reported that the $33 million that USA Today had reported in 2011 had grown to at least $40 million. We wrote as follows:

“The 2011 tax return for CASE, publicly available at GuideStar.org, shows that in just the two-year period of 2010 and 2011, the nonprofit took in over $81 million. The charity is structured as a 501(c)(3), meaning that both its income is tax exempt and donations made to it are tax deductible – a big tax subsidy from the U.S. taxpayer.

“Jay Sekulow is the President of CASE and his family fills four of the five slots on the Board of Directors. His wife, Pam, is the Secretary; his two sons, Jordan and Logan, are Directors; his brother, Gary, is the Chief Financial Officer and Chief Operating Officer….

“The 2010 and 2011 990 tax filings with the IRS show that ACLJ paid a business called the Constitutional Litigation and Advocacy Group a total of $5.6 million in just that two year period. The tax return notes that Jay Sekulow owns 50 percent of this business.”

Main Street businesses that received only a small portion of the amount of funds they requested under the PPP program, some as little as $1,000, may want to write to their representatives in Congress and request an investigation of why Sekulow’s well-funded, taxpayer-subsidized nonprofit got so much money.