Fed Chairman Jerome Powell and Treasury Secretary Steve Mnuchin apparently fear unleashing more angry protesters across the country screaming “no justice, no peace” into an air increasingly filled with COVID-19 droplets, more than they fear Trump Tweeting reprisals against them in the wee hours of the morning. Both Powell and Mnuchin raised their hands yesterday during the House Financial Services Committee hearing to agree to work with a proposed Department of Reconciliation to deal with the country’s history of slavery, segregation and ongoing “invidious discrimination” of people of color.

The hearing had been called by the Chair of the Committee, Maxine Waters, to take testimony on “Oversight of the Treasury Department’s and Federal Reserve’s Pandemic Response.” That topic was frequently framed around questions of racial discrimination and inequality. 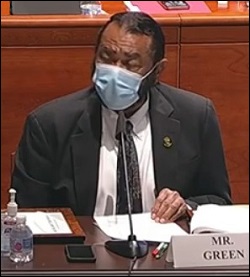 The raised hands from Powell and Mnuchin came in response to questioning from Congressman Al Green of Texas, a Democrat who can reliably be counted on to ask probing, cogent questions of witnesses that come before the Committee.

“Even when lending discrimination does not result in outright denials of credit, it drives up borrowing costs for minority home buyers. Loans to black and Hispanic borrowers continue to be higher-priced for both conventional and non-conventional loans in 2019…

“Adjusting for education, credit score, assets and other relevant factors, do you believe that invidious discrimination in lending exists against borrowers of color?…If you do believe so, would you kindly extend a hand into the air.”

Mnuchin played with his reading glasses in his hand until he saw what Powell was going to do. Once Powell raised his hand, Mnuchin followed.

Green then asked both if they felt that legislation should play a part in ending this invidious discrimination. Both answered in the affirmative. Green then said this:

Mnuchin, again, waited to see what Powell was going to do. Powell, hesitated, then raised his hand, saying “not sure what this is.” Mnuchin, then, finally, also raised his hand.

Congressman Gregory Meeks of New York had earlier in the hearing pinned down Powell and Mnuchin on whether structural discrimination exists in the U.S. The exchange went as follows:

Meeks: “Do you agree that structural discrimination exists in the United States economy today and impedes the economic success of communities of color and is key to understanding why black wealth is just 10 percent of that of white communities?”

Meeks then asked Mnuchin if he agreed also. Mnuchin said “I agree we need to do everything to create a level playing field.”

Later in his questioning, Meeks asked this:

Meeks: “Has the Fed made a requirement of all asset managers and broker-dealers with which they contract to partner with minority firms in fulfilling contracts and transactions?”

Powell: “Yes, we do have obligations, for example, with the companies we’ve contracted with during the pandemic. They have to address diversity and inclusion issues at their company and they have to reach out to minority suppliers as well.”

Apparently, neither Powell nor anyone else at the Fed is actually holding their vendors’ feet to the fire when it comes to racial diversity.

The Federal Reserve, via the New York Fed, has outsourced its $750 billion corporate bond buying programs to BlackRock. BlackRock also manages investments for the federal employees’ Thrift Savings Plan. As a federal vendor, BlackRock had to file a diversity report, which is conveniently attached to the annual report of the Thrift Savings Plan for 2018. (See Appendix A at this link.)

BlackRock’s diversity report shows that it has 6,096 employees in its top three categories of workers, which include the following job titles: Executive, Senior Official, Manager; First/Mid Officials, Managers; and Professionals.

According to the latest Census Bureau data, black or African Americans make up 13.4 percent of the U.S. population.

Unfortunately for Powell, he presides over a Federal Reserve Board of Governors that is 100 percent white. (To be fair, the Governors are nominated by the President, not Powell, and confirmed by the U.S. Senate.)

House Financial Services Committee Chair Maxine Waters also offered some insightful information on racial inequality in her opening remarks at the hearing. We’ve included those remarks in their entirety below:

“The pandemic continues to have a terrible impact. More than 126,000 people have lost their lives in the U.S., and this past Sunday, there were over 40,000 new cases of COVID-19, the highest number of daily cases yet.

“The unemployment rate in May was 13.3 percent, nearly four times higher than it was last May. All of the job gains of the past decade have been wiped out.

“Communities of color have been affected disproportionately both by the virus and its economic impacts. The Centers for Disease Control reports that as of June, Black and Latinx Americans are 4 to 5 times more likely than Whites to be hospitalized for COVID-19. And half of all black adults are not working.

“During the 2008 foreclosure crisis, we saw a similar disproportionate impact on communities of color. This was followed by an unequal recovery, where white households regained the wealth they lost; black and brown households are still trying to catch up. We cannot endure another unequal crisis or unequal recovery. Your agencies and Congress must do all that we can to ensure that history does not repeat itself.

“I want to thank both of you for your efforts thus far, and for the ways you have worked with me and the Members of this committee, including taking my many calls, to strengthen the implementation of the CARES Act.

“Secretary Mnuchin, you have used your authority to provide Community Development Financial Institutions (CDFIs) and Minority Depository Institutions (MDIs) greater access to the Paycheck Protection Program, including by setting aside $10 billion for them to lend to ensure more loans go to small minority owned businesses.

“Chairman Powell, you have worked with us to reduce the minimum loan size at the Main Street Lending Facility from $1 million to $250,000, and to extend the length of the loans. You have also broadened the eligibility of the Municipal Liquidity Facility to increase access to a greater number of cities and towns.

“The CARES Act has provided important relief to struggling families and communities, but as the pandemic has strengthened, so to must our efforts to fight it.”