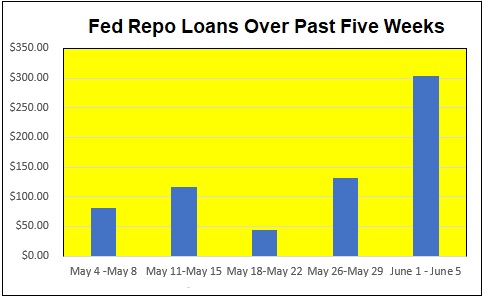 The Federal Reserve is desperately hoping that the pandemic, the coast-to-coast protests and the military generals’ scathing rebuke of the President’s plan to “dominate” grannies and college kids with bayonets and Black Hawk helicopters in the streets would distract the public from its money-feeding tube to Wall Street.

Unfortunately for the Fed, Americans can multitask.

Between Monday and Friday of last week, the Fed made $304.20 billion in repo loans to Wall Street’s trading houses. That was 230 percent of what it made the week before and 700 percent of what it loaned the week before that. (See chart above.) This would suggest that the liquidity crisis is heating up and/or that it’s taking ever larger amounts to levitate the stock market as sellers come back in.

The Fed has gone completely bonkers when it comes to its money spigot to Wall Street. On March 17, the New York Fed announced that it was going to be offering daily one-day loans of half a trillion dollars to Wall Street’s trading houses. That offer has been going on ever since but the daily amounts actually borrowed from the Fed have never gotten near that daily amount – thus far. The Wall Street banks that own the trading houses to whom the Fed is making the loans know that the Fed will likely be sued to release this information to the public. If they borrow too much from the Fed it will taint their reputation as a firm that was potentially insolvent or, at best, couldn’t get access to loans elsewhere.

Not only is the size of what the Fed is offering to trading houses nuts, but the interest rate is crazy as well. Never before in history has the Fed made emergency loans to Wall Street’s trading houses at 1/10th of one percent interest, as it is presently doing on its repo loans. Why aren’t we reading about this in mainstream newspapers? It’s an outrageous subsidy to Wall Street with no comparable subsidy to the public. Private student loans are running as high as 12 percent while interest on credit card debt is even higher.

The Fed can’t seriously claim to be helping families while ignoring this interest rate disparity.

Throughout the Fed’s history, which dates back to 1913, the concept of the Fed serving as lender-of-last-resort is that any emergency loans it makes should be at penalty rates to punish banks for getting into trouble and needing a bailout from the Fed.

Not only is the Fed breaking a cardinal rule by not inflicting penalty rates on banks, but it’s loaning to trading firms instead of sticking to its knitting and making loans to commercial banks that can boost the economy with business and consumer loans.

And the repo loans are only one of multiple bailout programs that the Fed has concocted for Wall Street.

While we were taking a look at the Fed’s Excel spreadsheets of its repo loans, we were curious to see what it did during the period of Monday, March 9 through Thursday, March 12. That’s when the Dow Jones Industrial Average lost 4,664 points in a four-day span. During Monday to Friday of that week, the Fed pumped $776.68 billion in repo loans to the Wall Street trading houses.

The CBOE Volatility Index (VIX), which measures implied volatility of the Standard and Poor’s 500, soared to an intraday peak of 82.69 on March 16, which was even higher than on November 21, 2008 during the height of the financial crisis when Citigroup was unraveling. The New York Fed had allowed Citigroup to pile on derivatives, subprime debt and off-balance sheet time bombs as its President, Tim Geithner, wined and dined with Sandy Weill, the bank’s Chairman and CEO. As is so typical in the crony, unaccountable world of Washington and Wall Street, Geithner was rewarded by failing up to U.S. Treasury Secretary in the Obama administration.

On June 4, Derek Thompson at the Atlantic wrote this as one reason  the stock market is going up despite the worst unemployment since the Great Depression:

“First, the economy is not really ‘broken,’ as it was in the Great Recession, when the U.S. housing market collapsed like a wobbly Jenga set as the stock market, labor market, and manufacturing industry all came clattering to the ground at once. Instead, a global pathogenic pulse, whose reverberations are being felt in every corner of the world, has suddenly interrupted an otherwise normally functioning economy.”

An “otherwise normally functioning economy”? In point of fact, the U.S. economy has not been functioning normally since the onset of the 2007 to 2010 financial crisis. This is simply the second leg of that crisis.

As we explained yesterday, the wheels were coming off the financial bus months before COVID-19 had claimed its first victim anywhere in the world. As our ongoing series on the Fed’s bailouts explain, the emergency loans from the Fed began on September 17, 2019 while the first reported case of COVID-19 did not emerge until more than three months later. Based on the Fed’s own Excel spreadsheet data, the Fed had made more than $6 trillion cumulatively in revolving emergency loans to Wall Street before the first COVID-19 case was reported in China.

To understand just how unprecedented the current amount of national debt has become in the U.S. as a result of these Wall Street implosions, one has to have some historical figures. At the beginning of the Bill Clinton Presidency in January 1993, the U.S. national debt stood at $4 trillion. At that point, the United States was more than two centuries old. It had financed the Revolutionary War, the Civil War, World Wars I and II and the Vietnam War. The country had also been through the greatest economic collapse in its history, the Great Depression, which required a large roster of fiscal spending programs.

In a non-broken economy, that astronomical growth in the national debt would have at least seen rising wages and strong GDP growth. Instead, workers have seen stagnant wages and tepid GDP growth since the last financial crash. The U.S. also has the worst income and wealth inequality since the late 1920s – another time when Wall Street was allowed to own deposit-taking banks. It’s been a winner-take-all economy with all the significant gains going to the top 1 percent.

Anytime someone is trying to convince you that there’s nothing to see here, stop in your tracks and pay very close attention.