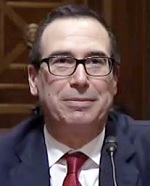 President Donald Trump has been sacking federal watchdogs at the speed of a bullet train. In just a six-week period in April and May, the President fired five Inspectors General of federal agencies. In last Friday night’s coup d’état, Attorney General William Barr, acting as consigliere for the President, ousted the U.S. Attorney for the Southern District of New York, the federal prosecutor that oversees prosecutions of Wall Street banks in that district. The privately owned Federal Reserve Bank of New York, which is in charge of the bulk of the Fed’s bailout programs, also resides in that district.

Barr and the President want to put a man with zero experience as a prosecutor in charge of that office, Jay Clayton, who currently heads the Securities and Exchange Commission which has only civil enforcement powers. Clayton represented 8 of the 10 largest Wall Street banks in the three years before going to the SEC as a partner at Sullivan & Cromwell.

Unfortunately, watchdogs and prosecutors are what American citizens need the most right now as vast sums of money are unaccounted for at both the Treasury and Federal Reserve.

The stimulus bill known as the CARES Act was signed into law by the President on March 27, 2020. It called for “Not more than the sum of $454,000,000,000…shall be available to make loans and loan guarantees to, and other investments in, programs or facilities established by the Board of Governors of the Federal Reserve System for the purpose of providing liquidity to the financial system that supports lending to eligible businesses, States, or municipalities.” In addition, if the Treasury had any of its $46 billion left over that Congress had allotted in the CARES Act to assist airlines or national security businesses, that was to be turned over to the Fed as well.

The CARES Act was passed almost three months ago at the outset of the worst economic upheaval since the Great Depression. One would have thought that the urgency with which Congress acted to pass the legislation would have resulted in rapid deployment of the $454 billion to the Fed to help shore up the economy.

But according to data released this past Thursday by the Federal Reserve, the Treasury has turned over just $114 billion of the $454 billion that was allocated to the Fed by Congress. The Federal Reserve’s weekly balance sheet data release, known as the H.4.1, showed a line item titled “Treasury contributions to credit facilities” and it showed a balance of just $114 billion.

A footnote on the H.4.1 explained exactly which Fed bailout programs had received the money from the Treasury:

That leaves $340 billion of the $454 billion unaccounted for.

The President’s economic advisor, Larry Kudlow, explained at a press briefing before the signing of the legislation, why the Fed was to get this vast sum of money. The money would be used as equity investments by the Fed in Special Purpose Vehicles that would use the money as “loss absorbing capital,” meaning that taxpayers would eat the first $454 billion in losses. The Fed would then be free to leverage this money up by a factor of 10 to create $4.54 trillion in bailout programs.

Fed Chairman Powell made an unprecedented appearance on the Today show on March 26 and explained the plan like this:

The writers of the CARES Act legislation apparently expected that the Fed might want to keep some of its money transactions a secret because Section 4009 of the CARES Act suspends the Freedom of Information Act for the Fed and allows it to conduct its meetings in secret until the President says the coronavirus national emergency is over.

Both Powell and the Fed’s Vice Chairman for Supervision, Randal Quarles, have repeatedly stated to Congress in hearings that the recipients of these bailout programs would be transparent to the American people. Last Tuesday and Wednesday, Fed Chairman Powell made his semi-annual appearances before the Senate Banking and House Financial Services Committee. He stated the following to both Committees regarding the Fed’s emergency bailout facilities:

“Many of these facilities have been supported by funding from the CARES Act. We will be disclosing, on a monthly basis, names and details of participants in each such facility; amounts borrowed and interest rate charged; and overall costs, revenues, and fees for each facility. We embrace our responsibility to the American people to be as transparent as possible, and we appreciate that the need for transparency is heightened when we are called upon to use our emergency powers.”

But this is the Fed’s web page that shows the disclosures being made to Congress under the facilities that the Fed has designated as emergency lending facilities under Section 13(3) of the Federal Reserve Act. There are 11 programs listed. Just three of the programs, or 27 percent of the total, have provided the actual transaction data showing specific loans to specific recipients.

Those programs are the Secondary Market Corporation Credit Facility, which has spent the bulk of its money buying up Exchange Traded Funds sponsored by BlackRock, the investment manager that the Fed hired to oversee the program; the Municipal Liquidity Facility which has made just one loan of $1.2 billion to the state of Illinois because the terms are so onerous in this program that is supposed to be helping state and local governments survive the pandemic shutdowns; and the Paycheck Protection Program Liquidity Facility, which provided $5.3 billion or 9 percent of its total outlays to a tiny New Jersey Bank that has been cited by the Federal Deposit Insurance Corporation for “unsafe or unsound banking practices.”

But this list of 11 bailout facilities that the Fed is operating is hardly the full picture. On September 17, 2019 the Fed began making hundreds of billions of dollars a week in super low cost repo loans to the trading units of Wall Street’s mega banks. Those loans are ongoing and are currently being made at an interest rate of just 1/10th of one percent interest. Since September of last year, the Fed has made more than $9 trillion cumulatively in these loans. It has not announced one scintilla of information on what specific Wall Street firms have received this money or how much they individually received.

The Fed has also made multiple loans through its Discount Window to Wall Street banks. The Fed has not released the names of these banks or how much they needed to borrow. The Fed has yet to explain how it can continuously be telling the American people that the Wall Street banks are “well capitalized” while it needs to continue to make these lender-of-last-resort loans.

The Federal Reserve has also set up a liquidity facility to make massive foreign central bank dollar swaps to create liquidity for those central banks to buy dollar-denominated assets and help prop up markets. Last Thursday’s H.4.1 shows the dollar swap facility has a current balance of $352 billion. The facility’s balance had been as high as $449 billion as of May 27.

According to the Government Accountability Office’s audit of the Fed that was conducted after the 2008 financial crisis, this is one of the uses of those dollar swap lines back then:

“In October 2008, according to Federal Reserve Board staff, the Federal Reserve Board allowed the Swiss National Bank [the central bank of Switzerland] to use dollars under its swap line agreement to provide special assistance to UBS, a large Swiss banking organization. Specifically, on October 16, 2008, the Swiss National Bank announced that it would use dollars obtained through its swap line with FRBNY [Federal Reserve Bank of New York] to help fund an SPV [Special Purpose Vehicle] it would create to purchase up to $60 billion of illiquid assets from UBS.”

UBS is a major investment bank and trading house and a major player on Wall Street. It purchased the large U.S. retail brokerage firm, PaineWebber, in 2000. The UBS Dark Pool, the equivalent of a thinly regulated stock exchange operating internally within UBS, has been one of the largest traders in Wall Street bank stocks.

The Federal Reserve Board of Governors has put the New York Fed in charge of the bulk of these bailout programs. Its conflicts are legion. (See related articles below.) It’s time for Congress to stop the Fed from repeating its Big Lie that it’s going out of its way to be transparent and force it to cough up the names and dollars amounts of the recipients of these loans.