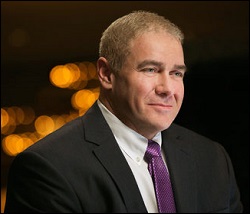 On Monday, a member of the New York Fed’s own Investor Advisory Committee on Financial Markets, Scott Minerd, published a critique which he headlined as follows: “Global Central Banks Fueling a Ponzi Market,” with this scary subhead: “Ultimately, investors will awaken to the rising tide of defaults and downgrades.”

The thrust of the article is that central banks (which include the New York Fed’s Wall Street money spigot that was launched on September 17, 2019) are creating a Ponzi scheme of liquidity that is hiding the true state of risk in both the stock and bond markets. The implication is that without the Fed’s cheap money flooding markets, interest rates on questionable debt would be much higher, thus providing a red flag for investors.

Minerd develops his thesis as follows:

“The disturbing trend is that despite the rally in risk assets in the prior year, the number of defaults rose by approximately 50 percent, according to data compiled by J.P. Morgan. Additionally, the number of distressed exchanges increased by 400 percent.

“This correlates well with our observation that the number of idiosyncratic defaults has been increasing. Ultimately, markets will need to reprice for this rising risk with increased bond spreads relative to Treasury securities. However, that day of reckoning when spreads rise is being held off by the flood of central bank liquidity and international investors fleeing negative yields overseas.

“And let’s not forget downgrade risk of BBBs: today 50 percent of the investment-grade [corporate debt] market is rated BBB, and in 2007 it was 35 percent. More specifically, about 8 percent of the investment-grade market was BBB- in 2007 and today it is 15 percent. It has more than quintupled in size outstanding, from $800 billion to $3.3 trillion. We expect 15–20 percent of BBBs to get downgraded to high yield [junk bond] in the next downgrade wave: This would equate to $500–660 billion and be the largest fallen angel volume on record—and would also swamp the high yield market.”

Repricing risk is exactly what the free market attempted to do on September 17, 2019 when the overnight borrowing rate in the repo market went from its typical 2 percent to 10 percent. Typically, banks, hedge funds and money market funds are the counterparties on these repo loans. The spike to a 10 percent interest rate on a collateralized loan seemed to be signaling that there was a growing worry about one or more of these players defaulting and lenders were backing away from making the loans. That’s exactly how free markets are supposed to function. They are supposed to accurately price risk. But the New York Fed killed that pricing mechanism by jumping into the market. It is currently offering this repo money at a fictitiously priced 1.55 percent.

And the money is not being loaned by the New York Fed to commercial banks, which could elect to pass on the cheap money by making consumer or business loans to goose the economy. The money is going to the New York Fed’s “primary dealers,” a quaint term for the biggest trading houses on Wall Street, which have clearly used it to make margin loans to hedge funds or their own trading desks to goose the stock market by 3,000 points.

“Federal Reserve Bank of Dallas leader Robert Kaplan said Wednesday central bank actions, most notably its injections of liquidity into financial markets, are boosting investors’ risk taking, adding he would like to find a way soon to pare back the expansion of the Fed’s balance sheet.

“ ‘Many market participants believe that growth in the Fed balance sheet is supportive of higher valuations and risk assets,’ Mr. Kaplan told reporters after an appearance at the Economic Club of New York.”

Kaplan’s remarks appeared to result in another Fed President, Neel Kashkari of the Minneapolis Fed, implying that anyone who thinks that the New York Fed’s pumping hundreds of billions of dollars each week into the trading houses of Wall Street has anything to do with the 3,000 points the Dow Jones Industrial Average has jumped since September 17 is a “QE Conspiracist.” Kashkari Tweeted the following: 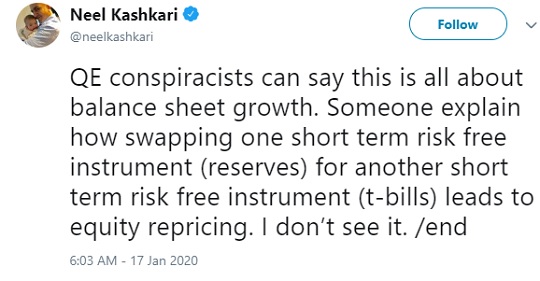 Kashkari was quickly dissed by traders and hedge fund managers, who responded to him with their own Tweets. Sven Henrich of Northman Trader wrote:

“Incidentally dismissing critics as ‘QE conspiracy theorists’ is not only poor form, it’s a cop out for avoiding public accountability and acknowledgment of the side affects & damage of the Fed’s ill conceived policies. If you don’t see it as you claim you’re not paying attention.”

“I’m a quant [quantitative analyst] and the highest correlation w stock mkt returns is fed liquidity, which is almost unprecedented today I’m sincerely worried that average Americans will buy an over valued mkt and get severely harmed”

Minerd can’t be brushed off as a conspiracy-theorist either. He is the Chairman of Guggenheim Investments and its Global Chief Investment Officer. He is also a long-term Wall Street veteran with previous executive posts at Credit Suisse, Morgan Stanley and Merrill Lynch. Earlier, he was a CPA with Price Waterhouse.

Is a Ponzi scheme the right way to look at what is happening to markets as a result of the flood of underpriced loans from the New York Fed – with money it creates electronically out of thin air. The traditional term on Wall Street for what is currently happening is “distribution.” That’s when the smart money pumps up the market sufficiently to excite the dumb money to come in – thus enabling the 1 percent to “distribute” their overpriced stocks to the suckers who don’t understand the history of “distribution” on Wall Street.

The problem is this. Wall Street never had unlimited funds to spike the market higher. The New York Fed does. So the question really boils down to (1) will Congress ever find the guts to hold hearings on this unaccountable money spigot at the New York Fed; (2) the Fed’s balance sheet is already over $4 trillion; is it prepared to double or triple that to keep the stock market roaring; (3) will any presidential candidate have the courage to use their bully pulpit to bring this critical topic to the attention of the American people, since mainstream media has refused to do so.