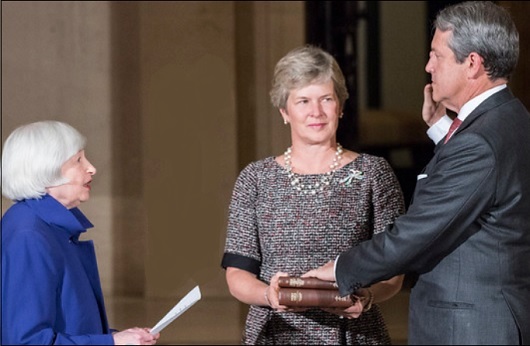 Randal Quarles Is Sworn In as Vice Chair for Supervision at the Federal Reserve by Fed      Chair Janet Yellen as Quarles’ Wife, Hope Eccles, Holds the Bible

Randal Quarles is the Vice Chairman for Supervision at the Federal Reserve Board. This is the most important position among Federal regulators when it comes to sniffing out and preventing the kind of systemic in-house bank frauds that collapsed much of Wall Street in 2008 and brought on the greatest U.S. economic downturn since the Great Depression.

On November 26, 2018, Quarles was also appointed to a three-year term as Chairman of the Financial Stability Board, the international standard-setting body for financial stability around the globe.

Financial stability at the largest global banks that Quarles oversees is looking less certain today than it has since the last financial crisis. Quarles is playing a key role in helping Fed Chairman Jerome Powell establish emergency lending facilities that are making trillions of dollars in revolving loans to Wall Street banks and trading houses while simultaneously telling the public that the banks he supervises are “well capitalized.” (If they are well-capitalized, why do they need these trillions of dollars from the Fed — a money spigot that began months before the coronavirus outbreak anywhere in the world.)

Having a man in charge of the banking sector that Americans are confident will conduct due diligence, in-depth investigations, and scrutinize off-balance sheet risks has never been more important than today.

Unfortunately, Quarles’ capability as a watchdog is in question because he allowed himself to become a victim of one of the most brazen stock frauds in history, perpetrated by a woman who dropped out of college at 19 and started her company as a teenager. The woman is Elizabeth Holmes and her company, which has now been dissolved after stiffing investors out of $750 million, was Theranos. The company claimed it had created a technology that would revolutionize the blood-testing industry. Holmes is now facing a criminal trial to be brought by the U.S. Department of Justice later this year with a potential maximum sentence of 20 years in jail. She has pleaded not guilty.

According to the financial disclosure form that Quarles quietly filed with the federal government’s ethics office that he dated June 1, 2017, when he was under consideration for the Fed post, he had more than $1 million invested in the scam. Making that entry particularly noteworthy is that also in June 2017 Eleftherios P. Diamandis, a Professor of Clinical Biochemistry, had called out Theranos as a likely scam in the scientific journal, Clinical Chemistry and Laboratory Medicine. Wall Street Journal reporter, John Carreyrou, had also written a dozen articles by the time of Quarles’ first government financial disclosure, raising alarm bells about the legitimacy of the company’s claims.

After Quarles was in his Vice Chair post for months and filed his next financial disclosure form with the government, which he dated May 14, 2018, he was still carrying his total stake in Theranos at $1,000,000 as his high end estimate. That May 14, 2018 document raises more questions because two months earlier the Securities and Exchange Commission had charged the company, its founder and CEO Holmes, and its former President, Ramesh “Sunny” Balwani, with masterminding a “years long fraud,” strongly suggesting that Quarles’ investment in the company was worthless – which, indeed, became the case a few months later when the company dissolved, handing its investors a certificate of dissolution so that they could take the losses for tax purposes.

Theranos and Holmes agreed to settle the SEC fraud charges with Holmes paying a paltry $500,000 penalty and being barred from serving as an officer or director of a public company for (wait for it) 10 years. Holmes was also required to return the 18.9 million shares that she obtained during the fraud, and relinquish her voting control of Theranos.

Wall Street Journal reporter Carreyrou wrote the seminal book on the case, “Bad Blood: Secrets and Lies in a Silicon Valley Startup.” Quarles’ name does not appear in the book but plenty of other big names do. Carreyrou wrote that Holmes had hired big name litigator David Boies (who seems to be piling up a litany of bad press for his representations of Harvey Weinstein and an ill-fated scheme involving Jeffrey Epstein). Carreyrou reports that Holmes paid Boies for his legal services, which typically ran to $1,000 an hour, with 300,000 shares of the untraded stock, which the company valued at that time at $4.5 million. Carreyrou also notes that “in early 2013, Boies began attending all of the company’s board meetings.”

That last Board Member, Richard Kovacevich, may be the connection between how Quarles ended up with Theranos stock. Quarles’ wife, Hope Eccles, is the daughter of Spencer Fox Eccles, the former Chairman and CEO of First Security Corp. for 18 years. The bank merged with Wells Fargo in 2000. The two men apparently remained in close touch, with Kovacevich invited to be the keynote speaker at the Spencer Fox Eccles Convocation at the David Eccles School of Business in 2016. (We’ve reached out to the media department at the Fed, asking for clarification on how Quarles obtained his shares in Theranos and how much he paid. We’ll update this article if we receive a response.)

Quarles’ financial disclosure forms – from 2017 through 2019 – show Quarles with a $1 million to $5 million personal mortgage from Wells Fargo which was incurred in 2016 as well as a home equity loan from $100,000 to $250,000. Wells Fargo is one of the bank holding companies that is overseen by the Federal Reserve and Quarles.

Quarles’ Senate Confirmation hearing raises further questions on his fitness for the job of supervising the nation’s largest and most serially corrupt banks, as we report below.

Following the 2007 to 2010 financial crash, which exposed a corrupt culture that permeated the biggest banks on Wall Street, Congress passed the Dodd–Frank Wall Street Reform and Consumer Protection Act in 2010. It fell far short of what was actually needed to reform Wall Street – which was the restoration of the Glass-Steagall Act which would have permanently separated the federally-insured, deposit-taking banks from the high-roller, investor-looting investment banks on Wall Street.

Dodd-Frank did have a number of positive features. It created the Consumer Financial Protection Bureau (CFPB) to police the tens of thousands of insidious small crimes the financial industry commits against unsophisticated borrowers and investors. It attempted to implement a weakened version of the Glass-Steagall Act through the so-called Volcker Rule, which was meant to prevent banks from engaging in proprietary trading for the house and eliminate their ownership of hedge funds and private equity firms. It also created the Office of Financial Research (OFR) to provide timely warnings on systemic risks that are building in the financial system.

The Trump administration has gutted the staff and funding of the CFPB and OFR. The Volcker Rule was stonewalled by Wall Street for years, never fully implemented and is now being watered down into meaninglessness thanks to Quarles and other regulators.

One other key component of Dodd-Frank was that the Federal Reserve would appoint a Vice Chair for Supervision to keep tight reins on the largest bank holding companies to prevent another replay of the 2008 financial collapse on Wall Street. After Dodd-Frank was signed into law in 2010, President Barack Obama still had six and one-half years in office. But during that entire period, and despite the statutory requirement, Obama failed to nominate anyone to fill that position. There are many who believe Obama did not want to go up against the powerful bankers on Wall Street who did not want to see the position filled.

President Trump nominated Randal Quarles to the position of Vice Chair for Supervision at the Fed on July 10, 2017. His confirmation hearing before the Senate Banking Committee was held oddly quickly, on July 27, 2017.

Senator Bob Menendez of New Jersey set the background for the Democrats’ hostility to Quarles at the hearing. The exchange went as follows:

Menendez: “Mr. Quarles, you left the Treasury Department in 2006 and joined the Carlyle Group, a private equity firm, in 2007. After you left the administration, you publicly advocated to change the rules that limited private equity investments in banks. Is that correct?”

Quarles: “That is correct Senator.”

Menendez: “Now, in September of 2008, the Federal Reserve announced a policy shift allowing for private equity firms to take larger ownership stakes in banks. In May of 2009, the Carlyle Group acquired, along with two firms, the $12.8 billion Bank United. Is that correct?”

Quarles: “That is also correct.”

Menendez: “As part of that deal, the FDIC agreed to cover most of the losses. In total, the FDIC made $1.6 billion in payments, more than any other loss sharing agreement [the FDIC made] during the financial crisis. Ultimately, the Bank United failure cost the FDIC $5.7 billion and the Carlyle Group and other private equity investors walked away with more than $2 billion…So, it seems, Mr. Quarles, that you used your remaining influence in the administration to change the rules to make it easier for your new employer, a private equity titan, to turn America’s struggling community and regional banks into cash cows.” (For more on the Carlyle Group, see related article below.)

Quarles offered no rebuttal, as his wife, Hope Eccles, who was seated directly behind him, looked on with a frown frozen on her face. Hope Eccles’ frown deepened further during this earlier exchange in the hearing between her husband and Senator Elizabeth Warren:

Warren: “So after the 2008 crisis, Congress put the Fed in charge of supervising the biggest banks and created a new position, this Vice Chair for Supervision that was supposed to lead that effort. That means that if you’re confirmed to this position Mr. Quarles, you will have more influence than any other person over the regulation of the big banks. Now, given that enormous power, the number one thing we need from the Fed’s Vice Chair for Supervision is a demonstrated willingness to stand up to the interests of the big banks that threaten the financial institutions. But when I look at your 30-year career spinning through the revolving door of the private sector, Mr. Quarles, I just don’t see it. You’ve got 15 years representing big banks at a New York law firm [Davis Polk & Wardwell], working on some of the mergers that created the too-big-to-fail banks that we have today. You have two stints at the Treasury Department, including shortly before the 2008 crisis where you insisted that the banks were well capitalized enough to survive a housing downturn — turns out they weren’t — and more than a decade in private equity and investment management where you’ve argued repeatedly for weaker rules for the biggest banks. So that’s not a track record that should give Americans a whole lot of confidence in you.”

Warren then ran through a list of regulations that a bank lobbying group wanted to roll back to see if Quarles agreed with the laundry list. He had no major disagreements.

Jeanna Smialek, writing for the New York Times in an article headlined “Meet the Man Loosening Bank Regulation One Detail at a Time,” reported that “In his first 21 months on the job, Randal K. Quarles, the Federal Reserve’s vice chairman for supervision and regulation, met at least 22 times with partners at his former law firm, Davis Polk & Wardwell, which represents many of the nation’s largest banks.”

The Fed’s Chair and Vice Chair Got Rich at Carlyle Group, a Private Equity Fund with a String of Bankruptcies and Job Losses