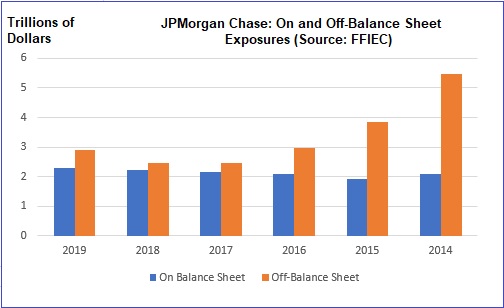 According to the Uniform Bank Performance Report for December 31, 2019 at the Federal Financial Institutions Examination Council (FFIEC), JPMorgan Chase, whose Chairman and CEO, Jamie Dimon, has perpetually bragged about its “fortress balance sheet,” has $2.3 trillion in exposure on its balance sheet and $2.9 trillion in off-balance sheet exposure.

The off-balance sheet exposure includes things like credit card lines of credit that have been issued but not tapped as of December 31, 2019; corporate standby letters of credits that have been issued but not yet tapped; securitized assets that have been sold with recourse back to JPMorgan Chase’s balance sheet; real estate loans committed but not yet funded; and a staggering $1.2 trillion in credit derivatives – the same instruments that brought on an FBI probe and congressional investigations of the bank in 2012 and cost the bank over $1 billion in fines for what became infamously known as the London Whale scandal.

On May 10, 2012, Jamie Dimon testified before the House Financial Services Committee regarding its London Whale scandal, where traders in its London office had gambled in credit derivatives with funds from its federally-insured bank and lost $6.2 billion. During that hearing, Dimon said this about off-balance sheet activities at his bank:

The truth is that off-balance sheet derivatives, despite blowing up the U.S. financial system, the U.S. economy, and the U.S. housing and job markets in 2008 in the greatest economic catastrophe since the Great Depression, have never been reformed by Congress or federal regulators. They are, in fact, more dangerous today than they were in 2008 because some of the counterparties to Wall Street’s derivatives are more fragile today than they were in 2008.

The Federal Deposit Insurance Corporation’s bank examiner’s manual explains this about the motivation for bank CEOs to have staggering amounts of off-balance sheet exposures:

“When analyzing off-balance sheet lending activities, examiners should evaluate the probability that lines will be funded and, if applicable, whether loss allowances adequately reflect off-balance sheet credit risks….”

The danger of this kind of off-balance sheet exposure is that off-balance sheet loan commitments and standby letters of credit are tapped during a serious economic downturn, such as we are seeing right now, and would thus move onto the bank’s balance sheet and have to be financed with the issuance of new debt or equity or the selling of assets at the worst possible time to try to execute such transactions.

But far more dangerous among JPMorgan’s off-balance sheet exposures are the credit default swaps that JPMorgan has sold (assumed the risk for) that may now be blowing up around the globe and for which it may have failed to take adequate loan loss reserves. That was what happened to the giant insurer, AIG, which resulted in it being seized by the U.S. government in 2008 and requiring a taxpayer backstop of $185 billion. As it turned out, mega Wall Street and foreign banks were the counterparties with AIG to those derivative trades and would not have been paid but for the government bailout.

JPMorgan Chase’s current problems appear to have begun long before the coronavirus COVID-19 had appeared anywhere around the globe. Specifically, JPMorgan Chase was dramatically drawing down the cash reserves it held with the Federal Reserve in the first half of 2019 – $158 billion to be exact – for purposes that have yet to be explained.

On September 17, 2019, the overnight lending rate on repurchase agreements (repos) spiked from the typical 2 percent range to 10 percent, meaning some very big lenders such as JPMorgan Chase were backing away from lending. That forced the Federal Reserve to jump in as lender of last resort, the first time the Fed had been forced to intervene in the repo market in any material way since the financial crisis of 2008.

Wall Street On Parade filed a Freedom of Information Act (FOIA) request with the Federal Reserve on November 12, 2019 requesting correspondence and emails related to JPMorgan Chase’s drawdown of its reserves in 2019. Under the FOIA law, the Fed had 20 business days to respond to our request. Instead, it took four months, without explanation to us, and then denied our request in its entirety. The Fed told us that it had 233 relevant documents but it wasn’t going to provide them to us to share with the public.

The official narrative that the Fed and mainstream media are pushing is that what’s happening today is not like the last financial crisis – meaning those Wall Street behemoth banks that were never reformed after the last crisis are not responsible for the new crisis. All the blame must be directed at the “Chinese virus,” to quote President Trump, so that the Fed can once again bail out Wall Street with trillions of dollars and no questions asked by Congress until the bailout is completed.

But the facts simply do not align with that narrative. According to the New England Journal of Medicine, the first confirmed case of coronavirus was reported in the United States on January 20, 2020. But according to the Fed’s own minutes, between September 17, 2019 and December 10-11, 2019, the date of its December federal open market committee meeting, the Fed had been pumping “roughly $215 billion per day” in emergency loans to Wall Street’s trading houses or more than $6.23 trillion in cumulative loans – before there was any coronavirus crisis in the United States.

Serious people have been trying to get their minds around JPMorgan Chase for a very long time. The Senate’s Permanent Subcommittee on Investigations spent months investigating the London Whale scandal and published a 300-page report that portrayed the bank as a rogue trading outfit gambling with hundreds of billions of dollars in deposits from its federally-insured bank while lying to its regulators and hiding its losses.

The U.S. Department of Justice can’t get its head around what’s going on at JPMorgan Chase either. Since 2014 the DOJ has slapped JPMorgan Chase with three criminal felony counts: two counts came in 2014 for the bank’s role in ignoring red flags for decades as Bernie Madoff carried out his Ponzi scheme while laundering money through his business bank account at JPMorgan Chase; another count came in 2015 for the bank’s role in rigging foreign exchange trading. The bank pleaded guilty to all three felony counts.

Today, the bank is under yet a third criminal probe for allowing its precious metals desk to be turned into a racketeering enterprise, according to the Department of Justice.

As the chart above indicates, JPMorgan Chase had much bigger off-balance sheet exposure in the past. That certainly doesn’t mean it’s safer now. It just means that federal regulators and Congress have accepted crumbs from the bank in the way of reform instead of demanding that it get its risk to taxpayers under meaningful control.

And as a final point to show just how much hubris from this bank its Board and Congress have been willing to tolerate, the same Chairman and CEO, Jamie Dimon, that sat at the helm during its admission to felony charges and $36 billion in fines for serially abusing its customers and investors, is still at the helm of this inscrutable bank.