For the first time in the history of the Federal Reserve, it has signed on to a plan with Congress to nationalize the unmanageable debts of global banks and other multinational corporations and put the U.S. taxpayer on the hook for the losses. Conducting the bulk of these programs will be the Federal Reserve Bank of New York, known as the New York Fed, which is a private institution owned by (wait for it) multinational banks.

Because the New York Fed is owned by multinational banks and is allowed to create trillions of dollars out of thin air to conduct bailouts of global banks and multinational corporations since it created this precedent in 2008, it is effectively functioning as a multinational central bank with the Federal Reserve in Washington, D.C. and Fed Chairman Jerome Powell little more than titular props for what’s really going on.

According to the language in the recent stimulus bill (CARES Act) passed by Congress and signed into law by President Trump, together with an interview Fed Chairman Jerome Powell gave to the Today show on March 26, the nationalization of bad debts will work like this: the U.S. Treasury will hand $454 billion of taxpayers’ money to the Federal Reserve. The Fed will, in turn, hand the bulk of this money to the New York Fed. The New York Fed will then create Special Purpose Vehicles (SPVs) using the $454 billion as loss absorbing capital (equity) to leverage its purchases of bad debts to $4.54 trillion. Ostensibly, if debt markets keep sinking and the New York Fed needs to buy up more bad debts from the global banks and multinational corporations, Congress and the U.S. Treasury will put the U.S. into ever deeper debt to oblige our multinational overlords. (Before the last financial crisis, U.S. national debt stood at $11 trillion. It has more than doubled in a dozen years to the current $24 trillion. Much of that growth resulted from fiscal stimulus measures to shore up the U.S. economy that multinational banks on Wall Street destroyed in 2008.)

So far, the Fed has newly announced it will be engaging in outright purchases of corporate bonds in both the primary and secondary markets, exchange traded funds, asset-backed commercial paper along with its ongoing purchases of Treasury securities and agency mortgage-backed securities. It is also making trillions of dollars in revolving loans to multinational trading houses against collateral that includes stocks. (Former Fed Chair Janet Yellen was on CNBC recently advocating for the Fed to consider outright purchases of stocks and junk bonds, effectively nationalizing those markets as well.)

Powell explained the newly hatched plan as follows on the Today show:

Some writers have suggested that this amounts to the U.S. Treasury taking over the Fed. But according to the text of the stimulus bill, the Treasury is simply the provider of the taxpayer cash to the Fed. And as we can see by the contracts now being drawn up by the New York Fed to hire Wall Street firms to manage these programs, the contracts are being signed solely by the New York Fed and the Wall Street firms. (See Icahn Called BlackRock “An Extremely Dangerous Company”; the Fed Has Chosen It to Manage Its Corporate Bond Bailout Programs.)

This is exactly what happened during the last financial crisis: the New York Fed was put in charge of the bailout programs and then farmed them out to multinational banks like Goldman Sachs and JPMorgan Chase – who are among the largest shareowner owners of the New York Fed. In fact, JPMorgan Chase, while its Chairman and CEO, Jamie Dimon, was sitting on the Board of the New York Fed, signed a highly lucrative contract to serve as custodian for the New York Fed’s purchases of agency mortgage-backed securities, which currently total $1.45 trillion. That contract has now been in effect for more than 11 years as the Fed promised to unwind that program, but never did, and is now doubling down on it.

During the more than 11 years that the New York Fed has allowed JPMorgan Chase to hold $1.45 trillion of Fed assets, it has pleaded guilty to three criminal felony charges and is currently under another criminal probe by the U.S. Department of Justice for turning its precious metals desk into a racketeering enterprise. One of JPMorgan Chase’s primary regulators is (wait for it) the New York Fed. One of the former bank examiners for the New York Fed, Carmen Segarra, was pressured by the “relationship managers” at the New York Fed to change her review of Goldman Sachs. The pressure was so intense that she went to the Spy Store, bought a tiny microphone, and taped the internal conversations. When she wouldn’t change her review, she was fired.

Let’s remember where all of these bad debts came from on which the U.S. taxpayer is now going to eat the losses. These multinational corporations and multinational banks issued debt in order to buy back trillions of dollars of their own shares to inflate their profits so that their CEOs and other top executives could claim great stock performance and get paid 200 to 400 times what their average workers were getting paid. According to the Economic Policy Institute, CEO compensation has grown 940 percent since 1978 while the typical worker’s compensation has risen by just 12 percent during that span of time. Jamie Dimon has become a billionaire as a result of stock options at his bank.

Today’s unprecedented nationalization of capital markets is the end result of the moral hazard Congress created by allowing the New York Fed, owned by multinational banks, to oversee the bulk of $29 trillion that the New York Fed created out of thin air during the last financial crisis and used to bail out its own shareholder banks and foreign global banks that were interconnected via derivative contracts that were blowing up.

Four of the largest shareowners of the New York Fed are the following multinational banks: JPMorgan Chase, Citigroup, Goldman Sachs, and Morgan Stanley.

JPMorgan Chase describes itself as “a leading global financial services firm with assets of $2.4 trillion and operations worldwide…we operate in more than 60 countries with more than 240,000 employees worldwide.”

Citigroup says: “In a word, Citi is global. Our more than 200,000 employees operate in a network of 1,000 cities and 160 countries and jurisdictions worldwide.”

Goldman Sachs brags that it “maintains offices in all major financial centers around the world.”

Morgan Stanley calls itself a “true global citizen, with offices and employees around the world.”

How did the underpaid, overworked, and now jobless American workers become the lender of last resort to global billionaire bankers?

The Federal Reserve Board of Governors hoped that the details of its negligence in turning over its infinite money creation to the New York Fed during the last financial crisis would never see the light of day. It battled media lawsuits to get the details of the sums loaned out and to whom for more than two years. When it lost at both the District Court and Appellate Court in New York, a group called the Clearing House Association, which included JPMorgan Chase and Citigroup, attempted to get the U.S. Supreme Court to overturn the  public’s right to know about the Fed’s secret money spigot. The Supreme Court did not take the case and the scandalous details were revealed as a result of that as well as the Dodd-Frank financial reform legislation of  2010 mandating the release of the details of some of the programs by December 2010.

Foreign central banks got $10 trillion of the $29 trillion in loans. The following chart shows where the other $19.5 trillion in cumulative loans went. 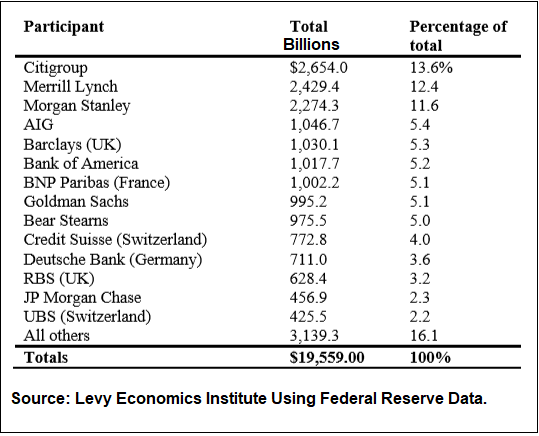