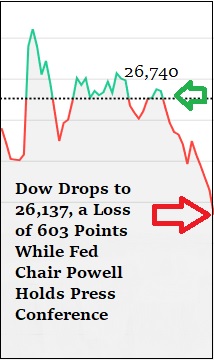 We write this with some trepidation that after this appears in print Federal Reserve Chairman Jerome Powell will stop taking questions at his press conferences or that all media questions will have to be routed through Vice President Mike Pence’s press office, as is now occurring with matters pertaining to the coronavirus. (We say that with only some facetiousness.) However, in this age of spin, facts matter more than ever.

First, a little background. After losing 3600 points the prior week, the Dow Jones Industrial Average staged a monster rally (more likely a short squeeze) on Monday, climbing 1293 points to close at 26,703.

At 1:34 a.m. (the wee hours of Tuesday morning) President Donald Trump posted a tweet to his Twitter page stating, among other things, that the Fed should ease and “cut rate big” adding that “Powell led Federal Reserve has called it wrong from day one. Sad!” The Federal Reserve prides itself on staunchly defending its independence from political pressure in its conduct of monetary policy. When the President tweets demands for what he wants the Fed to do, it unnerves the stock market.

Early Tuesday morning, Fed Chair Powell and U.S. Treasury Secretary Steve Mnuchin joined other G7 finance ministers and central bank heads on a conference call to discuss policy steps to counter the economic impact of the coronavirus. A statement was released from the G7 more than 90 minutes before the stock market opened at 9:30 a.m. The statement promised a “commitment to use all appropriate policy tools to achieve strong, sustainable growth and safeguard against downside risks.” (Read full statement here.)

The stock market deemed the statement too bland and in 24 minutes of trading, the Dow had fallen 300 points. Then at 10:00 a.m., after no other G7 central bankers had announced any rate cuts, the Federal Reserve released a statement announcing it was cutting the Fed Funds rate by half of one percent to a target range of 1 to 1-1/4 percent.

The Fed typically cuts its target rate in increments of ¼ point and only after a regularly scheduled FOMC meeting. This was the first time it had cut by a half point and not following a regularly scheduled FOMC meeting since the financial crisis of 2008. The stock market momentarily rallied on the Fed rate cut news, then mulled over the fact that no other central banks were announcing cuts and that the size of the cut by the Fed seemed like either a panic move or action to simply get the President off Powell’s back on his Twitter page, and resumed its selloff.

The Federal Reserve announced that Powell would be holding a press conference on the rate cut at 11:00 a.m. At the press conference, Powell read a statement that can be summed up as follows:

“The fundamentals of the U.S. economy remain strong…The [coronavirus] outbreak has also disrupted economic activity in many countries and has prompted significant movements in financial markets. The virus and the measures that are being taken to contain it will surely weigh on economic activity, both here and abroad, for some time. We are beginning to see the effects on the tourism and travel industries, and we are hearing concerns from industries that rely on global supply chains. The magnitude and persistence of the overall effects on the economy, however, remain highly uncertain, and the situation remains a fluid one. Against this background, the Committee judged that the risks to the U.S. outlook have changed materially. In response, we have eased the stance of monetary policy to provide some more support to the economy.”

Then Powell began to take questions from reporters. Eight minutes into the press conference, Heather Long of the Washington Post asked Powell about “rising concern about credit markets and possible insolvencies and defaults either from businesses or individuals from the coronavirus.” Powell said “financial markets are functioning in an orderly manner and all that sort of thing.” That statement sent traders pushing the sell button since it didn’t seem like Powell fully grasped the tens of billions of dollars that the airlines and mega banks on Wall Street had shed the prior week as the Dow tanked 3600 points.

Another tough question for Powell came from Ylan Mui of CNBC who said this: “President Trump was just tweeting about you this morning and talking about the Fed’s need to cut rates. Did you feel any political pressure to make this move?”

Powell said that “we are always going to make our decisions in the interests of the American people to carry forward and try to achieve the mandates that Congress has given us. And we are never going to consider any political considerations whatsoever. We will not do that, and it’s very important that the public understand that.”

It would be a lot easier for the public to trust that statement if Powell was not hobnobbing at billionaire parties in DC.

As the stock market continued to tank, a Fed staffer announced after Ylan Mui’s question that the Fed Chair would only be taking one more question. The Fed Chair then beat a rapid exit out of the press conference.

The markets were obviously not convinced that the Fed has not succumbed to political pressure or that central bankers can save us this time. By the time the press conference was over and reporters’ laptops packed up, the Dow had dropped 603 points from where it had been at the start of the press conference. The Dow closed the day down 785.9 points.