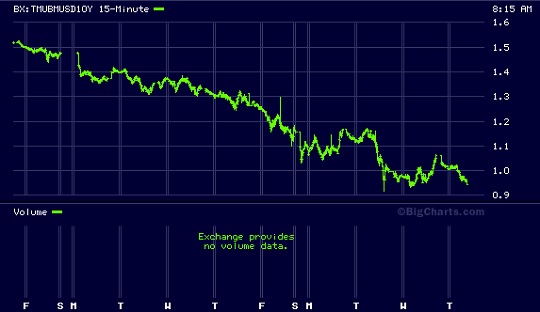 Federal Reserve Chairman Jerome Powell certainly has an odd notion of what constitutes an “orderly” market. At his press conference on Tuesday, following the announcement that the Fed was cutting its Fed Funds rate by a half point without waiting for its regularly scheduled meeting when rate cuts are normally deliberated, Powell said that “financial markets are functioning in an orderly manner and all that sort of thing.”

Challenging Powell’s assessment of “orderly,” the Dow dropped 603 points in the span of less than 30 minutes while he was speaking at his press conference and trying his best to bolster confidence in the market. That didn’t seem very orderly.

This is the first time since the financial crisis of 2008 that the Fed has been making repo loans to Wall Street. The Fed is also purchasing $60 billion a month in U.S. Treasury bills, which many folks on Wall Street consider the fourth round of quantitative easing (QE). The Fed deployed QE1, QE2, and QE3 following the 2008 financial collapse on Wall Street to further ease interest rates on top of cutting its Fed Funds rate to the zero-bound.

Also, the collapsing yield on the 10-year U.S. Treasury note is screaming that markets see a crisis in the offing. Remember, markets represent the composite wisdom of all participating investors. That composite wisdom is likely a better barometer of what is actually going on than the Fed Chair’s optimistic spin.

That statistic alone strongly suggests that despite the Fed secretly throwing $29 trillion cumulatively to bail out Wall Street banks and their derivatives following the crash of 2008, the United States has never actually returned to a self-sustaining economy.

Despite the massive corporate tax cut by the U.S. government in December of 2017, which was supposed to fuel annual economic growth above 3 percent, that has never materialized and the Organization for Economic Co-operation and Development (OECD) is projecting just 1.9 percent GDP growth for the U.S. this year.