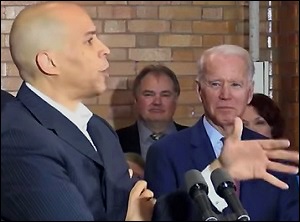 There has been the feeling of an invisible hand in the miraculous comeback of Democratic presidential candidate Joe Biden. Biden lost all three of the first races in Iowa, New Hampshire and Nevada, then spiraled to a long series of state victories despite a lackluster and sometimes rambling performance in the presidential debates.

Since the invisible hand in unlikely elections always has a money trail somewhere, we decided to pull back the dark curtain using campaign financing data at the Center for Responsive Politics (OpenSecrets.org). The name of the giant Wall Street law firm – Paul, Weiss, Rifkind, Wharton & Garrison LLP – emerges as a common denominator.

Paul Weiss has not only been a major donor to the Biden campaign but it was simultaneously a major donor to the campaigns of the four presidential candidates who dropped out of the race and then endorsed Biden at critical moments in his miraculous resuscitation. (As the Center for Responsive Politics notes on its website, the law firm itself is prohibited from making donations under federal law. The money came from the law firm’s partners, employees, their immediate family members or its PAC.)

Donors from Paul Weiss rank as the 12th largest donor to the Joe Biden campaign with a tally of $168,412. Paul Weiss was the top donor to Senator Cory Booker’s presidential campaign, sluicing $151,102 into his campaign coffers. Senator Amy Klobuchar, who hails from Minnesota – pretty far from the law firm’s Wall Street focus – received $76,932 from Paul Weiss, making it her third largest donor in her presidential bid.

Pete Buttigieg, who was the former Mayor of South Bend, Indiana – about as far from Wall Street as one can get, received $133,261 from those generous folks at Paul Weiss, making it his seventh largest donor.

And, finally, there was presidential candidate Kamala Harris, the junior Senator from California, who received the sizeable sum of $193,873 from the folks at Paul Weiss, ranking them her second largest campaign contributor.

Just how statistically likely is it that one law firm would show up in the campaigns of five different Democratic candidates for president without there being an agenda?

Adding to the suspicion is this. On March 2, the day prior to the make-or-break Super Tuesday primary elections on March 3, which guaranteed maximum media coverage, Senator Amy Klobuchar and Pete Buttigieg endorsed Joe Biden for President, giving him a critical lift.

One day before this week’s Super Tuesday II elections, Senator Cory Booker endorsed Biden, which followed by one day the endorsement of Biden by Senator Kamala Harris.

Paul Weiss gained notoriety in May of last year when the Chief Judge for the U.S. District Court for the Southern District of New York wrote a decision finding that the U.S. Justice Department had outsourced a criminal investigation to the target of the investigation – Deutsche Bank – and Deutsche Bank’s outside law firm (wait for it) Paul Weiss. (See our full report: Judge Issues Scathing Rebuke of DOJ and Law Firm, Paul Weiss.)

Deutsche Bank, Germany’s largest lender, is struggling after years of sagging profits, multiple CEOs, police raids, and a series of big fines for market abuses including money laundering. Last year, Congress subpoenaed documents from Deutsche Bank related to its dealings with Donald Trump. The New York Times reported in May that senior Deutsche Bank executives had blocked employees from alerting a federal government watchdog about suspicious money activity linked to Trump and his son-in-law, Jared Kushner.

Deutsche Bank has been one of Trump’s largest bank lenders, continuing to make loans to him when other mega banks refused, following a series of bankruptcies by Trump’s businesses.

Paul Weiss has also been outside counsel for decades to Citigroup, another serially charged Wall Street bank. (See our previous article: Meet the Lawyer Who Gets Citigroup Out of Fraud Charges.)

Both Deutsche Banks and Citigroup have been suffering severe stock market losses over the past two weeks.