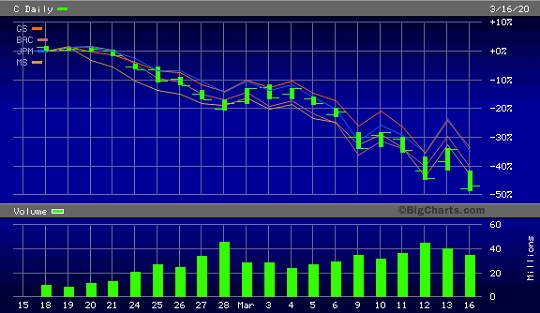 The U.S. stock market set new records yesterday – all of them bad. The Dow Jones Industrial Average suffered its worst point loss in history, closing down 2,997 points at 20,188.52, which effectively erases all of its gains in the last three years. On January 20, 2017, when Donald Trump was sworn in as President, the Dow closed at 19,827. It’s now grown by just 1.8 percent in total over that span of time.

The Dow also had its second worst percentage loss in history yesterday, losing 12.93 percent. That loss is only exceeded by Black Monday, October 19, 1987, when the Dow lost 22.6 percent. It barely beats out October 28, 1929 when the Dow lost 12.8 percent and ushered in what would become the worst stock market crash in history. From late 1929 to 1933 the stock market would go on to lose 90 percent of its value and not reset the highs it had made in 1929 until 25 years later.

The CBOE Volatility Index (VIX), which measures implied volatility of the Standard and Poor’s 500, soared to an intraday peak of 82.69 yesterday which was even higher than on November 21, 2008 during the height of the financial crisis when one of America’s largest federally-insured banks, Citigroup’s Citibank, which had been allowed by the Federal Reserve to become an unaccountable derivatives casino, was imploding. This is what we wrote about the situation on November 24, 2008:

“Citigroup’s five-day death spiral last week was surreal. I know 20-something newlyweds who have better financial backup plans than this global banking giant. On Monday came the Town Hall meeting with employees to announce the sacking of 52,000 workers.  (Aren’t Town Hall meetings supposed to instill confidence?) On Tuesday came the announcement of Citigroup losing 53 per cent of an internal hedge fund’s money in a month and bringing $17 billion of assets that had been hiding out in the Cayman Islands back onto its balance sheet. Wednesday brought the cheery news that a law firm was alleging that Citigroup peddled something called the MAT Five Fund as ‘safe’ and ‘secure’ only to watch it lose 80 per cent of its value. On Thursday, Saudi Prince Walid bin Talal, from that visionary country that won’t let women drive cars, stepped forward to reassure us that Citigroup is ‘undervalued’ and he was buying more shares. Not having any Princes of our own, we tend to associate them with fairytales. The next day the stock dropped another 20 percent with 1.02 billion shares changing hands. It closed at $3.77.

“Altogether, the stock lost 60 percent last week and 87 percent this year. The company’s market value has now fallen from more than $250 billion in 2006 to $20.5 billion on Friday, November 21, 2008.  That’s $4.5 billion less than Citigroup owes taxpayers from the U.S. Treasury’s bailout program.”

Instead of winding down Citigroup because it was an insolvent institution and didn’t qualify for a bailout, Congress put a gun to the head of taxpayers and pumped $45 billion in equity capital into Citigroup; the federal government gave the bank over $300 billion in asset guarantees; and the Federal Reserve – Citigroup’s lapdog regulator – secretly sluiced $2.5 trillion in cumulative loans into Citigroup in hopes that Congress would never discover just how derelict it had been in regulating the Frankenbank. The Fed even had the temerity to accept junk bonds and stocks as collateral on some of Citigroup’s loans, at a time when both were in freefall. The Fed made many of these loans to Citigroup at an interest rate of less than one-half of one percent while Citigroup continued to charge double-digit interest rates on its consumer credit cards, lavished big bonuses on its executives, and foreclosed on struggling families using an alias. (See also: As Citigroup Spun Toward Insolvency in ’07- ’08, Its Regulator Was Dining and Schmoozing With Citi Execs.)

Now flash forward to yesterday. Citigroup was the worst performing bank of all of the Wall Street behemoths, losing 19.30 percent in one trading day. On September 15, 2008, the day that all of Wall Street was in crisis mode, Lehman Brothers filed bankruptcy, Merrill Lynch had to be taken over by Bank of America, and AIG was one day away from a government takeover, Citigroup’s stock only lost 15.14 percent.

And yet no matter what pundit you see on TV, all that one hears is that Wall Street banks have plenty of capital. These two things cannot be simultaneously true: the Fed cannot have had to be pumping hundreds of billions of dollars each week into Wall Street banks and their trading arms for the past six months (long before there was any coronavirus outbreak anywhere in the world) if these banks actually did have adequate capital.

The chart above shows that the major Wall Street “universal” banks, which combine a toxic trading culture, tens of trillions of dollars of dark derivatives along with owning federally-insured banks that are backstopped by the taxpayer, are once again trading as a herd just as they did in the 2008 financial crash. Citigroup, as of yesterday’s close, has lost 48 percent of its market value since February 14.

After the Federal Reserve allowed Citigroup to blow itself up with derivatives in 2008, eventually trading as a penny stock in 2009, the same Federal Reserve has continued to allow Citigroup to hold astronomical sums in over-the-counter (dark curtain) derivatives today. As of September 30, 2019, according to the latest data available from the Office of the Comptroller of the Currency, Citigroup’s federally insured bank has $49 trillion notional (face amount) in derivatives, which is $16.8 trillion more than when it blew itself up in the last quarter of 2008.

And Citigroup is not alone. JPMorgan Chase, Goldman Sachs, Morgan Stanley and Bank of America also hold insane levels of derivative exposure. Their likely insurance company counterparties, as outed by the Office of Financial Research, have also been bleeding massive amounts of common equity capital this year. And Deutsche Bank, Germany’s largest bank, is another counterparty that has been bleeding capital and setting all time lows.

This is likely the key reason that the Federal Reserve has not used its Section 13(3) emergency lending authority and created a commercial paper bailout program and other such programs. Under the Dodd-Frank financial reform legislation of 2010, the Fed can only use those emergency lending authorities if it briefs the Senate Banking Committee and House Financial Services Committee, including providing the names of the banks getting the money. The Fed is also prevented from bailing out individual banks as it did in 2008 and can provide only broad-based lending programs.

Fed Chairman Jerome Powell has repeatedly testified to Congress that the Wall Street banks it regulates have plenty of liquidity and capital. The Fed has been approving all of the stress tests for these banks and allowing them to spend tens of billions of dollars each year doing stock buybacks and paying increased dividends to their shareholders. Imagine the public and political backlash if it now turns out that the Fed has allowed these banks to become the same money-losing derivative casinos that they were in 2008 and they need trillions of dollars more in another bailout.