The Fed Tried to Give Away $1 Trillion to Wall Street Today and Failed, Suggesting Specific Banks Are In Trouble 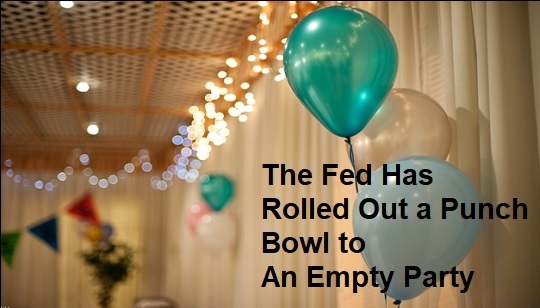 What is the world coming to when the New York Fed can’t mix up $1 trillion of almost-free money in its punch bowl and get the mega Wall Street banks to drink freely?

The New York Fed handed out $129.60 billion this morning at an average interest rate of 0.112. That was for a one-day loan to one or more of Wall Street’s trading firms. The specific names of which firms are doing the borrowing are a closely-guarded secret at the Fed – just as they were during the financial crisis in 2008 until media lawsuits and a legislative amendment forced the banks’ names out into the open. All that the public is allowed to know today is that any of the Fed’s 24 primary dealers (Wall Street trading houses) are allowed to borrow from the facility. (See list below.)

The New York Fed also offered $500 billion in a 28-day loan this morning and, stunningly, it only had offers for $18.45 billion of the $500 billion, which was loaned at an average interest rate of 0.151 percent.

Despite that poor showing at its money spigot party this morning, the New York Fed made a surprise announcement and said it was throwing another money giveaway of $500 billion at 1:30 p.m. today. Again, only takers for $19.40 billion of the $500 billion showed up. The loans were made at the incredibly low average interest rate of 0.102 percent.

There was this same lack of demand last Thursday and Friday when the Fed tried to give away, almost for free, $1.5 trillion over the two-day span.

What could possibly account for this lack of greed from the typical pigs at the trough?

The reason that jumps to mind to anyone who has been following the Fed’s money spigot closely, is that there are only a handful of Wall Street banks that are in desperate need of this cash. Since the beginning of this program last fall, the New York Fed has imposed caps on how much any one of the 24 Wall Street firms could borrow at each offering. It refers to this limit as a “proposition.”

It’s also not clear if the Fed has, without the public’s knowledge, imposed an overall cap on how much any one bank can borrow within a specific period of time.

But what today’s unscheduled afternoon loan operation suggests is that a bank that borrowed last Thursday or Friday or this morning, may have been in need of more assistance this afternoon.

Deutsche Bank had earlier in the day traded at a new all-time low of $4.99 before bouncing back to $5.39 for a percentage decline of 9.67 percent. That leaves the bank with just $11.5 billion in common equity capital versus tens of trillions of dollars (notional) in derivatives exposure.