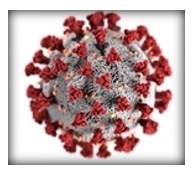 Despite assurances from the Trump administration that the overall risk to Americans from the coronavirus is “low,” public concern grew over the weekend as New York State reported its first known case of the coronavirus in the most populous city in the country, New York City, where a woman in her 30s who had traveled to Iran tested presumptively positive, meaning the CDC still has to confirm the results. Also over the weekend, the first two deaths were reported in Washington State and new coronavirus cases were announced in Oregon, Rhode Island, and Florida. Other U.S. states with coronavirus cases include California, Illinois, Wisconsin, Arizona and Massachusetts.

On Saturday, the Governor of Washington State declared a State of Emergency after a man there died from the virus after community transmission, and 50 residents and staff at a skilled nursing facility, the Life Care Center of Kirkland, are showing virus-like symptoms and being tested. The facility has approximately 108 residents and 180 staff members.

Following the Washington State announcement of the State of Emergency, a second man in the state died from the virus on Sunday. As of Sunday evening, health officials had reported a total of 13 people testing positive for the virus in Washington State – 10 in King County and three others in Snohomish County.

Governor Ron DeSantis of Florida declared a public health emergency in response to two presumptive positive cases of coronavirus in the state. The Florida State Department of Health said that the two individuals were adults – one living in Manatee County and the other in Hillsborough County. The two counties border each other on the West Coast of Florida.

Health officials said that the Hillsborough patient had a history of traveling to Italy while the Manatee County patient had not traveled to any of the restricted countries, meaning it could be yet another case of community spread of the virus. The Florida Department of Health said it is engaged in contacting, isolating and monitoring people who came into contact with the two patients. A press conference on the matter is planned for Monday morning.

There was growing debate over the weekend about the CDC’s flawed efforts at providing an adequate number of functioning test kits to states after the first case was reported in the U.S. in January. While other countries have been testing thousands of people per day, as of last week the U.S. had tested only 459 people over the entire prior month because the CDC had sent out a limited amount of test kits, many of which were initially faulty. Governor Gavin Newsom of California rattled the stock market last Thursday when he held a press conference and announced that the CDC has provided his state with only 200 test kits. California has a population of 40 million people. As a result of pressure from state health officials and governors, the CDC over the weekend said it is now allowing state labs to conduct their own tests and lowered the restrictions on who could be tested. Previously, it was allowing only testing of people who had traveled to China in the past 14 days or had come in contact with someone who had and were showing symptoms of the virus.

Over the weekend, Vice President Mike Pence, appointed last week by President Donald Trump to be in charge of containing the coronavirus outbreak, appeared on several Sunday news programs and said that 15,000 new tests kits were “in the mail” to the states and that thousands more will be delivered soon. Alex Azar, Secretary of the Health and Human Services federal agency, appeared on ABC’s This Week and said 75,000 test kits will be made available and more after that. He said over 3600 people had now been tested, which may be as a result of states now conducting their own tests.

The 3600 tests in the U.S. compares to 65,000 people who have been tested for the virus in South Korea and China’s reported ability to conduct 1.6 million tests a week.

Axios is reporting that Health and Human Services has launched an independent investigation to understand why defective test kits were distributed by the CDC to state health departments. 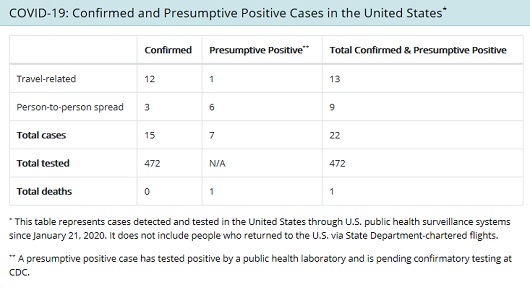 Screen Shot of CDC Chart on Number of Tests Conducted as of February 29, 2020