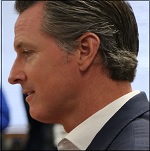 The Dow Jones Industrial Average was down by 960 points this morning and then began to stage a strong rally. That rally unraveled on news that came out of the press conference held by California Governor Gavin Newsom.

The Governor, a Democrat, seemed to go out of his way to stress that his administration has been working closely with the Trump administration in addressing the coronavirus outbreak. He refused to criticize Trump when questioned by reporters.

What did become quite clear, however, as reporters drilled down to the situation on the ground in California, is that the state has taken in 800 repatriated Americans from countries with coronavirus outbreaks, has received thousands more passengers on domestic flights from suspect countries, while it currently has just 200 tests kits from the CDC to test for the virus. Newsom told reporters that “It’s simply inadequate to do justice to the kind of testing that is required to address this issue head on.”

In exchanges with reporters, the Governor indicated that California is not alone in terms of a gross inadequacy of test kits. He said other states have the same problem.

Even more alarming, the Governor made it clear that the protocol established by the CDC for when states could test a patient for the virus was so limited that it restricted his state and other states from testing a large number of patients.

Newsom said that based on calls held with the CDC today, a significant increase in test kits were to be made available to California shortly and the protocol was to be revised to allow more testing. According to Newsom, the CDC assured him that the state would be allowed to “exponentially increase” its capacity to test.

In President Donald Trump’s press conference on the coronavirus last evening, the President emphasized the low number of people in the United States that had tested positive for the virus, attributing it to the outstanding work of his administration. If it now turns out that the number of infected people in the U.S. has been artificially depressed because the CDC was not providing test kits to the states, Congress will be launching a wave of new hearings to see if undue pressure was put on the CDC by the Trump administration.

The press conference was held as a result of news that went viral Wednesday that a woman from Solano County, who is currently hospitalized at the UC Davis Medical Center in Sacramento, had tested positive for coronavirus despite having no known ties to travel outside of the U.S. This raised the alarming possibility that the virus may be present from sources inside the United States. The woman was previously treated at NorthBay VacaValley Hospital in Vacaville. When asked by a reporter if that hospital is still accepting patients, the Governor said he believed it was.

Newsom also indicated that the state is monitoring 8400 people who have traveled to California from foreign countries which have experienced outbreaks of the coronavirus.

By the time all of this had been digested by the stock market, the Dow Jones Industrial Average closed down 1,190 points, close to its lows on the day, bringing the losses so far this week to more than 3,000 points on the Dow. On Monday President Trump tweeted that “Stock Market starting to look very good to me!”