Why Would Goldman Sachs and BofA Throw Gasoline on the Stock Market Fire Yesterday? 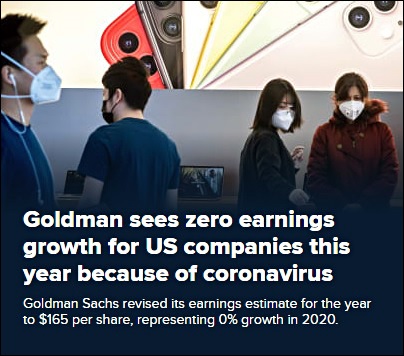 Screenshot of Graphic and Headline at CNBC, Thursday, February 27, 2020

Going into Thursday morning, February 27, this was the situation on Wall Street:

For most folks, that would have been enough bad news to digest with their morning coffee. But it wasn’t for the folks at Goldman Sachs. At 8:12 a.m. yesterday morning, CNBC ran the above graphic and headline: “Goldman sees zero earnings growth for US companies this year because of coronavirus.”

Bank of America also apparently felt it was necessary to throw a little more gasoline on the smoldering stock heap. As 8:25 a.m. this headline appeared at CNBC: “The global economy is heading for its worst year since the financial crisis, Bank of America says.”

Now ask yourself this: we are only two months into the calendar year; how could anyone accurately predict where the economy is going to be 10 months from now? And even if one did have an economic crystal ball, why would any Wall Street investment house want to torch a stock market already in flames?

Folks who have read the Michael Lewis book, The Big Short, or saw the movie, or sat through the Senate hearings on how Goldman Sachs made huge short bets (betting on a decline in prices) against its own dodgy subprime debt securitizations, could be forgiven for questioning if Goldman Sachs has already lined up its short bets on the stock market.

If Goldman has shorts to protect itself, its share price is not reflecting the market’s perception that it has adequately covered itself. Through Thursday’s close, Goldman Sachs has lost 11.3 percent of its market value that it had as of Friday, February 21 at the 4 p.m. market close. Some of its peer banks have done much worse, however. In the same time period, Citigroup (which has a large foreign presence) has lost 15.68 percent; Bank of America, which owns Merrill Lynch and depends on retail clients not yanking their accounts, has lost 15.22 percent; Morgan Stanley, which recently announced it was spending $13 billion to buy the discount broker, E*Trade, has lost 13.37 percent. JPMorgan Chase, which said recently that it’s going to try to make it cool to borrow from the Fed’s Discount Window, has lost 10.6 percent in the same time period.

All of these mega banks own their own Dark Pools, thinly regulated internal stock exchanges in which the Securities and Exchange Commission insanely allows them to trade in the shares of their own stock and that of their peer banks. One can only imagine how much greater their share price losses might have been without this handy perk.

But the declines among the mega Wall Street banks pale in comparison to the losses of the life insurance companies that serve as counterparties to Wall Street banks’ derivative trades. Losses in shares of Lincoln National, Ameriprise Financial, Prudential Financial and Voya Financial have far exceeded the big banks’ losses. Lincoln National, for example, has lost 20.14 percent since last Friday’s close.