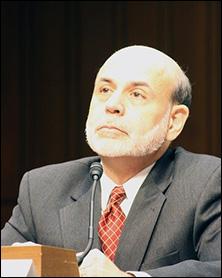 On February 3, 2015, Jim Clifton, the Chairman and CEO of the iconic 85-year old polling company, Gallup, penned an article for his company in which he called the reported unemployment number issued by the U.S. Government “The Big Lie.”

Wall Street On Parade has now discovered that a speech by former Fed Chairman Ben Bernanke and a statement made by the current Fed Chairman Jerome (Jay) Powell,  support the view that today’s reported unemployment rate of 3.5 percent is statistically impossible based on a long-held economic model known as “Okun’s Law.”

Named after economist Arthur Okun, the economic law works like this according to a speech given by the Fed Chair Ben Bernanke in March 2012:

Here’s the common sense version of Okun’s Law: when there is a financial crash and millions of workers are thrown out of their jobs and businesses shut down, it is going to take a significant increase in GDP to create new jobs for those workers plus create jobs for the new job entrants coming from high school and college graduates.

But that never happened. From 2009, the year after the epic financial collapse on Wall Street, through 2018, U.S. GDP has grown at an average rate of 1.8 percent. That substandard rate has persisted despite three rounds of Quantitative Easing (QE) by the Federal Reserve; $29 trillion in secret revolving loans from the Fed to bail out Wall Street trading houses and their foreign derivative counterparties; vast amounts of federal government fiscal spending to stimulate the economy; and the massive tax cut [corporate welfare] of the Trump administration.

But somehow, magically, alongside a subpar growth rate of 1.8 percent, unemployment has shrunk from 9.6 percent in 2010 to 3.5 percent today.

This is an excerpt of what Jim Clifton of Gallup had to say about the government’s unemployment number in 2015:

Everything Jim Clifton reported above is precisely correct. And there’s more, as we reported in 2017:

…here’s the quirky thing about how the U.S. government counts people as being employed: according to the official web site of the U.S. Department of Labor’s Bureau of Labor Statistics, an individual can be counted as employed even if they didn’t receive a dime in salary during the week the data is collected. The BLS explains its rationale as follows:

People are considered employed if they did any work at all for pay or profit during the survey reference week. This includes all part-time and temporary work, as well as regular full-time, year-round employment. Individuals also are counted as employed if they have a job at which they did not work during the survey week, whether they were paid or not, because they were: on vacation; ill; experiencing child care problems; on maternity or paternity leave; taking care of some other family or personal obligation; involved in a labor dispute; prevented from working by bad weather.

The government counts these individuals as employed under the rationale that “they have a specific job to which they will return.” But in a labor market where workers are frequently paid on a per diem basis and live from paycheck to paycheck, what the government is reporting and the economic reality on the ground may be quite two different things.

There is another situation where an individual could not be receiving a dime of compensation – on a long term basis – but still counted as employed by the U.S. government. The BLS provides two examples:

All of the above is how the U.S. government has been able to defy Okun’s Law and make the labor market look dramatically better than it is since Wall Street imploded the U.S. financial system in 2008 and crashed the U.S. economy and housing market, putting millions of Americans out of work and causing the greatest foreclosure crisis since the Great Depression.

The sitting Chairman of the Federal Reserve, Jay Powell, apparently knows the current 3.5 percent U.S. unemployment rate is statistically impossible. Prior to becoming Fed Chair, Powell sat on the Board of the Federal Reserve. Minutes for the October 23-24, 2012 Fed meeting reveal the following statement by Powell:

“While I see some improvement at the margin, it still feels to me like a world with 2 percent inflation and 2 percent economic growth, which is obviously not strong enough to reduce unemployment.”

In Bernanke’s speech referenced above, which occurred in March of 2012, he attempted to save face among global economists who were skeptical that U.S. unemployment could be showing such an improvement with such a tepid rate of GDP growth. Bernanke offered them this nugget:

“…the combination of relatively modest GDP growth with the more substantial improvement in the labor market over the past year is something of a puzzle. Resolving this puzzle could give us important insight into how the economy is likely to evolve. To illustrate the tension, consider the relationship between the recent changes in the unemployment rate and in real GDP relative to the predictions of Okun’s law…the decline in the unemployment rate over the course of 2011 was greater than would seem consistent with GDP growth over that period. Indeed, with last year’s real GDP growth below 2 percent, less than what most economists would estimate to be the U.S. economy’s potential rate of growth, one might have expected little change in the unemployment rate last year or even a slight increase.”

What was this smoke and mirrors all about? Just imagine how much more public anger there would be against Wall Street’s fat cats and their bailout kingpins at the Federal Reserve if the media had reported the real unemployment rate along with the fact that Wall Street banks and their foreign derivative counterparties had received a secret $29 trillion bailout from the Fed, allowing them to pay billions in bonuses to their miscreant bosses, while average Americans’ lives and dreams were shattered.