As Fed’s Powell Spoke at His Press Conference, the Market Gave Him a Taste of a Taper Tantrum 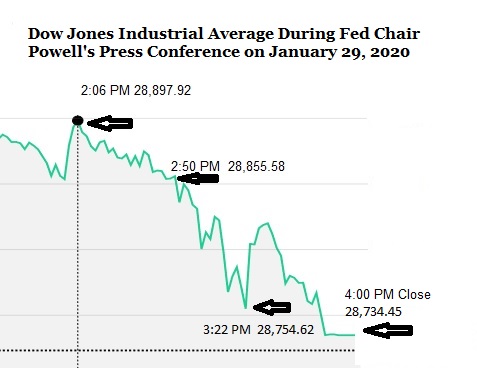 The typically calm and unruffled Fed Chairman Jerome (Jay) Powell had a furrowed brow yesterday as he walked to the podium at his press conference at 2:30 p.m. It was clear from the outset that Powell had been put on a short leash as to what he could and could not say about the underpriced repo loans that the Fed has authorized the New York Fed to shower on the trading houses of Wall Street to the tune of hundreds of billions of dollars per week since last September 17. This is an unprecedented action by the Fed when there is no known financial crisis occurring. As we reported on Monday, the New York Fed has pumped a cumulative $6.6 trillion into those Wall Street trading houses in just the past four months – a third of the amount of its support during the 2007 to 2010 financial crisis.

Adding to the scripted quality of the press conference, about nine minutes into the press conference when Nick Timiraos of the Wall Street Journal asked Powell about the level of bank reserves the Fed might need going forward, Powell interjected with a prepared statement on repos, reading word for word from the script. Powell read the following:

“As our [Treasury] bill purchases bring the underlying level of reserves up to an ample level on a sustained basis, the necessary quantity of overnight and term repo will gradually decline. We’ve already begun the gradual reduction in the quantity of repo and we’ll continue to reduce those offering amounts gradually as conditions permit. At some point we’ll also raise the minimum bid rate. Even after we reach an ample level of reserves it’s possible that repo operations might play a role as a backstop and support effective control of the Federal Funds rate. And we’ll continue to discuss that issue in review and implementation framework.”

That was definitely not what the Wall Street trading houses wanted to hear. Tapering and a possible spike in the interest rate the Fed might charge them for their gambling money sent the Dow on a downward spike. The selloff accelerated with the next question from CNBC’s Steve Liesman at about 13 minutes into the press conference. Liesman posed the following question to Powell:

“I know you’ve said it’s not QE [Quantitative Easing] but it’s $390 billion over five months which is a lot to expand the balance sheet…a lot of people in the market are sort of concerned that it looks like QE and they’re trading that way. Are you concerned that the market is embracing this like a QE program and that the rise in the stock market is linked to you. You may then experience something of a taper tantrum the way Chairman Bernanke did when he tried to roll it off.”

Powell answered the market part of the question this way:

“In terms of what affects markets, I think many things affect markets. It’s very hard to say with any precision at any time what is affecting markets. What I can tell you is that you know what our intention is: It is to return reserves to an ample level. We expect that to happen in the second quarter….”

There is a concrete correlation between the New York Fed’s money spigot and the sharp rise in the stock market. During the week of December 16 of last year, the S&P 500 Index and the Dow Jones Industrial Average set new record highs every single day. That trading action followed a statement the prior week by the New York Fed that it was going to shower Wall Street with hundreds of billions of dollars in extra cash on top of what it was already offering in repo loans.

Powell is no doubt feeling the heat from the growing assessment on Wall Street that the Fed is fueling a stock market bubble that is destined to end badly. (See The Man Who Advises the New York Fed Says It and Other Central Banks Are “Fueling a Ponzi Market”.)

The press conference ended with a question from Mark Hamrick of Bankrate.com. Hamrick asked Powell about the fact that people living on fixed income investments have been harmed by the Fed keeping interest rates so low for so many years. Powell answered with this: “We have to do what’s best for the overall society and the economy.”

That statement would be so much more believable were it not for the cold, hard facts that Wall Street, the beneficiary of all of this largess from the Fed, remains on a crime spree that is daily ripping off the average American.