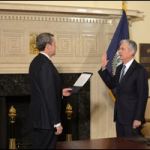 The Chairman of the Federal Reserve, Jerome (Jay) Powell, regularly states at his press conferences that the Federal Reserve is there to serve the interests of the American people. But his actions regularly undermine the credibility of that statement in a manner not all that dissimilar to Alan Greenspan, whose Fed chairmanship oversaw the gutting of Wall Street banking regulations and ended just before the greatest Wall Street collapse since the Great Depression.

Powell goes out of his way to present himself at his press conferences as the quintessential public servant whose only mission is to perform the mandate set out by the elected representatives in Congress while his actions strongly suggest he is a wily rogue agent for Wall Street’s cartel of bank trading houses.

Congress set out its mandate for the Federal Reserve and its fellow regulators to follow when it comes to monitoring and disciplining Wall Street banks in the passage of the Dodd-Frank Wall Street Reform and Consumer Protection Act that was enacted on July 21, 2010. The legislation was meant to rein in the greed, corruption and illegal trading activities of Wall Street banks that had led to the financial crash and Great Recession — where 8.7 million Americans lost their jobs and 10 million American homes were lost to foreclosure from 2006 to 2014.

Since September 17, 2019, the New York Fed, with full awareness from Chairman Powell, has funneled $6.6 trillion in revolving loans to the trading houses of Wall Street with no vote in Congress and no disclosures as to what firms are receiving this money and why.

Powell has attempted to pass off the loans as part of the New York Fed’s routine open market operations, which are not subject to Congressional oversight. But open market operations don’t last every business day for more than four months with a new plan to extend them into April and involve $6.6 trillion flowing to unnamed trading houses on Wall Street when there is no stated emergency by the Fed. Last November 13, Powell testified in a Congressional hearing that “The core of the financial sector appears resilient, with leverage low and funding risk limited relative to the levels of recent decades.”

According to Section 1101 of the Dodd-Frank legislation, both the House Financial Services Committee and the Senate Banking Committee are to be briefed on any emergency loans made by the Fed, including the names of the banks doing the borrowing. The section reads:

Senator Elizabeth Warren sits on the Senate Banking Committee. As of October 18 she had no information on the situation from the Fed. We know that is true because on that date she sent a letter to U.S. Treasury Secretary Steve Mnuchin demanding answers as to what necessitated the Fed to have to make these loans and why they were being extended into 2020. As Treasury Secretary, Mnuchin also chairs the Financial Stability Oversight Council (F-SOC) whose job is to prevent systemic financial crises like the 2008 crash and Great Recession. Thus far, Warren has not shared with the public any response from Mnuchin.

Just this morning at 8:30 a.m., the New York Fed pumped out another $59.85 billion in loans to unnamed trading houses on Wall Street.

The $6.6 trillion in cumulative revolving loans offered at less than 2 percent interest by the New York Fed correlate perfectly with the stock market setting new highs. That’s not helping the public interest but rather the top 10 percent of households who own the vast majority of stocks and bonds. What the average American is getting is a dangerous stock market bubble and exploding national debt along with the decimation of the standard of living for their children and grandchildren who will be taxed in order to deal with interest on that debt.

On top of this outrage from Powell, last Thursday, while media headlines were focused on the impeachment proceedings and the spreading Chinese coronavirus, Powell released a plan to further gut the Volcker Rule provision in Dodd-Frank. The provision was authored by Senators Jeff Merkley and Carl Levin. It became known as the Volcker Rule after the former Fed Chairman, Paul Volcker, who was a strong advocate of its passage. The Volcker Rule is contained in Section 619 of Dodd-Frank and could not be clearer in its intent. It read at the time of signing:

“The Bank Holding Company Act of 1956 (12 U.S.C. 1841 et seq.) is amended by adding at the end the following: Unless otherwise provided in this section, a banking entity shall not—(A) engage in proprietary trading; or (B) acquire or retain any equity, partnership, or other ownership interest in or sponsor a hedge fund or a private equity fund.”

But the big Wall Street trading houses had no intention of ever letting the Volcker Rule be implemented. Dodd-Frank was signed into law in 2010 but Federal regulators did not provide their interpretation on how the rule should be implemented until December 2013, indicating at that time that Wall Street had until July 21, 2015 to fully implement the rule. Then the Federal Reserve granted banks an extension until July 21, 2017 to bring their hedge funds and private equity funds into compliance. But according to a 2018 report by Business Insider, JPMorgan Chase, the largest Federally-insured commercial bank in the United States “ranked number 4 among all hedge fund managers with $47.7 billion in hedge fund assets under management.” JPMorgan itself admits to managing $39 billion in hedge fund assets.

Merkley and Levin explained the critical importance of the Volcker Rule in a detailed policy paper in 2011. They wrote:

When Merkley and Levin refer to “major global financial firms,” they mean the “universal” banks on Wall Street that, since the repeal of the Glass-Steagall Act in 1999, have been allowed to own federally-insured deposit-taking banks as well as stock and bond trading houses known as investment banks and brokerage firms. The Volcker Rule was supposed to stop these universal banks from using mom and pop deposits insured by the American taxpayer to make casino-like gambles in stocks, bonds, commodities and derivatives.

Merkley and Levin explained in their paper:

“Today we continue the march toward effective repeal of the Volcker Rule. The rule is premised on the common sense proposition that banks should not be allowed to gamble with taxpayer money and that taxpayers should never again be forced to rescue banks and their highly compensated executives from the consequences of their bad decisions.

“The Volcker Rule seeks to protect taxpayers by prohibiting short-term, speculative trading by banks and restricting their investments in high-risk funds (referred to as ‘covered funds’). Last fall, we significantly weakened the former, and today we propose to undermine the latter.

“Today’s proposal would increase banks’ ability to add risk to their balance sheets in two significant ways. It would broaden the categories of private funds in which banks can invest—most notably by including venture capital and credit funds. And, it would allow banks to evade certain investment restrictions by permitting a greater degree of ‘parallel investment’ alongside covered funds, thus allowing exposure to these often high-risk holdings.”

“The proposal opens the door for firms to invest without limit in venture capital funds and credit funds. The proposal suggests that these funds do not raise concerns about banks’ involvement in risky activity that the Volcker rule was intended to address. To the contrary, it is clear why Congress legislated the Volcker rule to limit these activities.

“Some credit funds played a material role in the financial crisis. These funds were not transparent in their activities, misled investors, and contributed to the financial abuses Congress intended to address in passing the Dodd-Frank Act.

“I respectfully dissent as to the Commission’s decision to propose more revisions to the Volcker Rule. The Volcker Rule, in simple terms, contains two basic prohibitions for banking entities: (1) they may not engage in proprietary trading; and (2) they cannot have an ownership interest in, sponsor, or have certain relationships with a covered fund. Last September, the Commission, along with other Federal agencies, approved changes that significantly weakened the prohibition on propriety trading by narrowing the scope of financial instruments subject to the Volcker Rule. Today, the Commission and the other agencies take aim at the second prohibition, and propose to significantly weaken the prohibition on ownership of covered funds. When the agencies approved the changes on proprietary trading in September, the late Paul Volcker himself sent a letter to the Chairman of the Federal Reserve stating that the amended rule ‘amplifies risk in the financial system, increases moral hazard and erodes protections against conflicts of interest that were so glaringly on display during the last crisis.’ I can imagine that he would say something very similar about the further changes that we propose today, particularly the erosion of the existing protections regarding conflicts of interest.  I fear that, if we continue to roll back the Volcker Rule, we will soon reach a stage where, sadly, there is nothing left.”

Powell is clearly not the mild-mannered public servant working for the interests of the average American. It’s long past the time for the Senate Banking Committee, House Financial Services Committee, and Senate Permanent Subcommittee on Investigations to open formal inquiries into the actions of Chairman Powell and the Federal Reserve that fly in the face of duly enacted legislation by Congress.