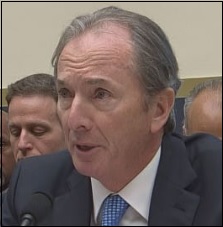 The New York Fed is one of 12 regional Federal Reserve banks – but the only one willing to turn on a multi-trillion dollar money funnel to Wall Street’s mega banks when they need a secret bailout. Since September 17 of this year, the New York Fed has pumped upwards of $3 trillion in revolving loans to trading houses on Wall Street, without naming which firms are getting the money and why they’re getting it. From December 2007 to the middle of 2010, the New York Fed turned on its money funnel to Wall Street to the tune of $29 trillion – a fact it battled in court for years to keep secret.

Today, the New York Fed will only say that it’s making these new loans, which tally up to hundreds of billions of dollars each week, to some of its 24 “primary dealers.” For the most part, those “primary dealers” are the high-risk trading units of big commercial banks in the U.S. and abroad. (See list below.)

One of the primary dealers that is eligible to be taking these multi-billion dollar loans from the New York Fed is Morgan Stanley & Co. LLC. Morgan Stanley describes that unit as follows: “Its businesses include securities underwriting and distribution; financial advisory services, including advice on mergers and acquisitions, restructurings, real estate and project finance; sales, trading, financing and market-making activities in equity and fixed income securities and related products, and other instruments including foreign exchange and commodities futures; and prime brokerage services.”

At 11:36 a.m. on Thanksgiving Day, when households across America were either watching the Macy’s Thanksgiving Day Parade on TV or hustling in the kitchen, Bloomberg News dropped the bombshell report that foreign currency traders at Morgan Stanley had hidden a trading loss of upwards of $140 million. Two of the traders involved in the losses were based in London, according to the Bloomberg report.

There are a number of curious and noteworthy aspects to this report. First, only Bloomberg News was privy to this information. Morgan Stanley had not informed its shareholders via any public statement nor had it informed the Securities and Exchange Commission via a public filing. Thus it is also highly likely that it had not informed the New York Fed, another of its regulators, despite the fact that its CEO, James Gorman, sits on the Board of the New York Fed. The Bloomberg article suggests that the firm itself is just now investigating what actually happened, meaning that an outside news agency attempting to place a realistic figure on the amount of the losses is suspect at best.

In 2012, the Chairman and CEO of JPMorgan Chase, Jamie Dimon, called news reports of its derivative trading losses in London “a tempest in a teapot.” Those hidden trading losses turned out to be over $6.2 billion.

Morgan Stanley, however, can top JPMorgan’s historic trading loss. During the financial crisis, one of Morgan Stanley’s traders, Howie Hubler, lost $9 billion betting on subprime debt. But Morgan Stanley survived the financial crisis because the New York Fed secretly pumped more than $2 trillion into Morgan Stanley from 2007 to the middle of 2010 according to a Fed audit performed by the Government Accountability Office (GAO) and released to the public in July 2011. The audit occurred as the result of an amendment attached to the Dodd-Frank financial reform legislation of 2010 by Senator Bernie Sanders and others.

At the outset of the financial crisis, Morgan Stanley was predominantly an investment bank and a large retail brokerage firm which was not eligible to borrow from the Fed’s Discount Window, which was restricted to deposit-taking banks. In order to funnel trillions of dollars to the trading houses on Wall Street, the New York Fed created an alphabet soup of loan programs. One of those programs was called PDCF (Primary Dealer Credit Facility). For the first time in history, under that program, the New York Fed funneled $8.9 trillion to the trading houses on Wall Street, in many cases taking the unprecedented action of accepting stocks and junk bonds as collateral – at a time when both of those markets were in freefall.

In 2008, at the height of the financial crisis, both Morgan Stanley and Goldman Sachs became bank holding companies, subject to regulation by the New York Fed and with access to its Discount Window.

The Dodd-Frank financial reform legislation was supposed to put an end to the Federal Reserve’s unaccountable bailouts of Wall Street’s trading houses. The Federal Reserve’s mandate is to be a lender-of-last-resort to deposit-taking banks, not trading casinos. And yet, here we are again today dealing with secret trading losses and the Fed’s secret bailouts to unnamed trading houses on Wall Street.

If you’re thinking this is the banking structure from hell, you would be spot on.