Is the Fed’s $3 Trillion in Loans to Trading Houses on Wall Street Legal? 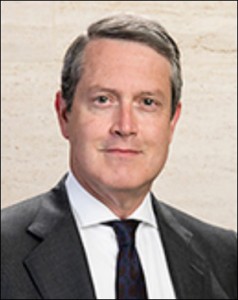 Randal Quarles, Vice Chair for Supervision at the Federal Reserve

The House Financial Services Committee has released its memorandum outlining the topics that will be raised in its hearing tomorrow with Federal bank regulators, which will include Randal Quarles, Vice Chairman of Supervision at the Federal Reserve. Noticeably absent from the list of topics is what legislative authority the Federal Reserve has that gives it the legal power to be pumping out hundreds of billions of dollars each week in revolving loans to the trading houses of Wall Street.

Since September 17, the Federal Reserve has allowed its New York Fed branch to funnel approximately $3 trillion to unnamed trading houses on Wall Street, much of it at interest rates of less than 2 percent while the behemoth banks that own those trading houses charge their mom and pop credit card customers 17 percent on their credit cards. This looks like more of what Senator Bernie Sanders calls “socialism for the rich, and rugged, you’re-on-your-own individualism for everyone else.”

Since the Fed turned on its money spigot to Wall Street on September 17, not one hearing has been called in Congress to examine what gives the Federal Reserve, the central bank of the United States, the legal authority to provide cheap loans to the trading houses on Wall Street. These are the same Wall Street trading houses that blew themselves up with derivatives in 2008 and took down the U.S. economy in the greatest financial collapse since the Great Depression. Why should the Federal Reserve encourage more of that activity by providing cheap money?

Most of these trading houses are units of mega Wall Street banks that have publicly traded shares. If a publicly traded company cannot obtain loans from anywhere other than the cheap money spigot of the Federal Reserve, it needs to publicly disclose that to its shareholders and potential buyers of its stock. That’s a material fact that legally must be disclosed. The legal argument could be made that the Federal Reserve is aiding and abetting a fraud upon the investing public by failing to name the trading houses that are receiving these massive loans. The loans started out as just overnight loans but they have since morphed to include 15-day and 42-day loans, strongly suggesting that one or more of these firms can’t obtain long-term funding elsewhere.

The United States has historically bragged about its free and transparent markets. But what the Fed is doing today is pulling a dark curtain around the financing of this so-called free and transparent market. The public has no idea which Wall Street firms have received this $3 trillion or why they can’t borrow it elsewhere. This kind of obfuscation by the Federal Reserve could actually stimulate distrust in the U.S. banking system. The Fed admitted as much in its most recent Federal Open Market Committee (FOMC) minutes, writing that participation in the Fed’s loan program “could become stigmatized.”

There is also the question as to whether the Federal Reserve is following its legal requirement to advise the House Financial Services Committee and Senate Banking Committee about these emergency loans. The Fed has attempted to pass off the loans as part of its routine open market operations, which are not subject to Congressional oversight. But open market operations don’t last for two and a half months (with the plan to extend them into next year) while pumping out $3 trillion to unnamed Wall Street trading houses. The fact that the Fed keeps increasing the amount of the loans and extending the length of the loans means that it sees some type of emergency situation.

According to Section 1101 of the Dodd-Frank financial reform legislation of 2010, both the House Financial Services Committee and the Senate Banking Committee are to be briefed on any emergency loans made by the Fed, including the names of the banks doing the borrowing. The section reads:

Senator Elizabeth Warren sits on the Senate Banking Committee and as of October 18 she had no information on the situation from the Fed. We know that because on that date she sent a letter to U.S. Treasury Secretary Steve Mnuchin demanding answers as to what necessitated the Fed to have to make these loans and why they were being extended into next year. As Treasury Secretary, Mnuchin also chairs the Financial Stability Oversight Council (F-SOC) whose job it is to anticipate and prevent systemic financial crises like the 2008 financial collapse on Wall Street.

Curiously, the public has not heard a peep about any response, or lack of response, to that letter.