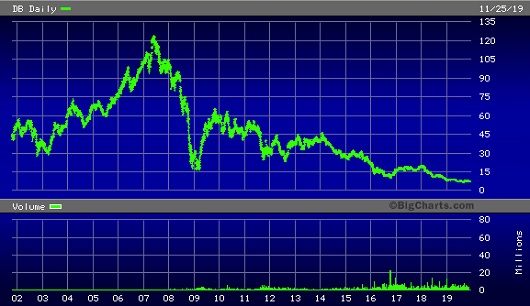 There is one phrase on Wall Street that instills fright like no other – “intra-day bankruptcy” – especially if it’s describing a bankruptcy filing by a highly interconnected Wall Street firm.

On July 20, 2008 a Federal Reserve economist, Patrick Parkinson, used that phrase in an email to describe fears that Lehman Brothers might have to make an intra-day bankruptcy filing and to speculate on what was going on in the minds of the folks at JPMorgan Chase, Lehman’s clearing bank, regarding how it might get “stuck” with Lehman’s overnight loans.

The email describes perfectly what is highly likely going on in the minds of top executives at JPMorgan Chase today and why the Fed has been pumping hundreds of billions of dollars each week into unnamed trading houses on Wall Street since September 17.

The email was contained in documents provided with the Financial Crisis Inquiry Commission Report, the official analysis of the crisis that took down century-old iconic names on Wall Street in 2008. In that email, Parkinson wrote:

“…Focusing for the moment on LB’s [Lehman Brothers] vulnerable tri-party borrowings, as of July 14 it was financing $200 billion of collateral. Of that amount, all but $12.8 billion was PDCF-eligible [PDCF, Primary Dealer Credit Facility, was an emergency loan program set up by the Fed]. Of the non-PDCF-eligible, $8.7 billion was equities. JPMC [JPMorgan Chase], LB’s clearing bank, is likely to be the first to realize that the money funds and other investors that provide tri-party financing to LB are pulling back significantly. If some morning it fears that the investors are unlikely to roll their repos, it may threaten not to unwind LB’s previous night’s repos. If it did that, LB would be done because the tri-party investors would control its securities inventory. The investors presumably would promptly liquidate the $200 billion of collateral and there is a good chance that investors would lose confidence in the tri-party mechanism and pull back from funding other dealers. Fear of those consequences is, of course, why we facilitated Bear’s acquisition by JPMC. We could try to dissuade JPMC from refusing to unwind by pointing out that if the investors don’t roll the repos LB can borrow from us through the PDCF. Even if we did so, for two reasons JPMC might still balk. The first is the non-PDCF collateral. We could address that concern by making the equities and other non-PDCF collateral eligible. Or we could try to get LB to wire $12.8 billion of cash into JPMC to cover the rollover risk. The other reason is a fear that LB could be placed in bankruptcy intra-day, before the next day’s tri-party repos and any PDCF loans are settled, in which case JPMC would be stuck with $200 billion in secured loans to LB. I’m not sure that this is at all likely, but JPMC and BNYM [Bank of New York Mellon] are sufficiently concerned that they have arranged a meeting Monday afternoon with SIPC [SIPC, Securities Investor Protection Corporation, insures brokerage accounts against theft or bankruptcy filings]. (LB’s PD [Primary Dealer] is a SIPC member (as are some but not all of the other PDs) and its bankruptcy would be administered by SIPC.) Board staff plan to sit in on this meeting. But even if we are willing to extend as much as $200 billion of financing to LB, absent an acquirer our action would not ensure LB’s survival…”

(The bracketed information in the email above has been inserted by Wall Street On Parade.)

Lehman Brothers filed for bankruptcy just after midnight on Monday, September 15, 2008 with derivative counterparties that stretched around the globe and included some of the biggest banks on Wall Street.

We bring up this email because JPMorgan Chase’s Chairman and CEO, Jamie Dimon, admitted on his earnings call with analysts on October 15 that his bank had backed away from repo lending on September 17, the day repo rates spiked to 10 percent and the Fed jumped in as lender-of-last-resort (and has been pumping out the money ever since). Dimon attempted to explain his bank’s backing away as necessitated by regulatory rules on how much his bank had to maintain in its reserve account at the New York Fed. Dimon said this on the call:

“But now the cash in the account, which is still huge – it’s $120 billion in the morning, and it goes down to $60 billion during the course of the day and back to $120 billion at the end of the day. That cash, we believe, is required under resolution and recovery and liquidity stress testing. And therefore, we could not redeploy it into repo market, which we would’ve been happy to do.”

But JPMorgan Chase, according to its regulatory filings, has plenty of other cash that is not parked at the New York Fed. Why didn’t it make loans from those funds? There are two possible scenarios – neither of which is particularly reassuring. One scenario is that the bulk of JPMorgan Chase’s cash is already pledged as collateral for its own trades – for example, on the $55.7 trillion it holds in derivatives. Another scenario is that JPMorgan is once again afraid of a highly interconnected Wall Street firm making an intra-day bankruptcy filing and catching everybody by surprise.

What Wall Street firm would be at the top of their radar? Deutsche Bank is the most likely candidate. Deutsche Bank has reported losses in three of the last four years; its share price has lost 90 percent of its value since February of 2007; as of the close of trading yesterday, Deutsche had $15.25 billion in common equity value versus $49 trillion notional (face amount) in derivatives according to its 2018 annual report. Deutsche Bank has had four different CEOs in just over four years; and it’s now doing the same kind of good bank/bad bank restructuring that Citigroup announced during its own financial crisis.

And Deutsche Bank is highly interconnected to Wall Street’s biggest banks. According to a 2016 report from the International Monetary Fund (IMF), Deutsche Bank is highly connected to JPMorgan Chase, Citigroup, Goldman Sachs, Morgan Stanley and Bank of America as well as other mega banks in Europe. The IMF wrote that Deutsche Bank posed a greater threat to global financial stability than any other bank as a result of these interconnections – and that was when its market capitalization was tens of billions of dollars larger than it is today. Deutsche Bank’s stock closed yesterday at $7.38 – that’s down from $120 in 2007.