In the Midst of the Biggest Wall Street Bailout Since the Financial Crisis, the Fed Presents Alice-in-Wonderland Testimony for Today’s House Hearing 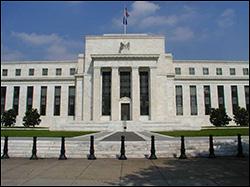 The titular head of bank supervision for the Federal Reserve is Randal Quarles. We use the term, titular, because the job was so amorphous that President Obama never bothered to fill the slot, even though it was legally mandated under the Dodd-Frank financial reform legislation of 2010. Everyone on Wall Street knows that it’s the all-powerful New York Fed that “supervises” the behemoth banks on Wall Street.

Last week New York Times’ reporter Jeanna Smialek accurately summed up the real job of Randal Quarles, writing this: “In his first 21 months on the job, Randal K. Quarles, the Federal Reserve’s vice chairman for supervision and regulation, met at least 22 times with partners at his former law firm, Davis Polk & Wardwell, which represents many of the nation’s largest banks.” Later in the article, Smialek adds this: “He has talked with Davis Polk more often than other law firms, but executives from Goldman Sachs and JPMorgan have also met with him about 20 times each.”

Today, Quarles will be probed on his supervisory work by the House Financial Services Committee. The questioning comes at a time when the Federal Reserve has authorized its New York Fed branch to pump hundreds of billions of dollars each week into the coffers of Wall Street’s trading houses, the first such loans since the financial crisis.

The Fed first tried to justify the loans by saying they were a short-term measure to stem a liquidity crisis. But the so-called “liquidity crisis” has not prevented the stock market from setting new highs since the loan operations began on September 17. And the short-term operation has been running every business day since that time and is currently scheduled to reach into next year or last permanently. A cumulative total of approximately $3 trillion in overnight and longer-term loans has been funneled to unnamed trading houses on Wall Street without either the Senate or House calling a hearing to examine what’s really going on. Thus, we will be watching closely today to see if the subject gets any attention from lawmakers at the House hearing which is titled “Oversight of Prudential Regulators: Ensuring the Safety, Soundness, Diversity, and Accountability of Depository Institutions?” (That question mark at the end of the title appears at the official website of the House Committee, suggesting that the Democratic majority of that committee is not convinced that the Federal bank regulators are properly doing their job. In addition to Quarles, representatives from the Federal Deposit Insurance Corporation (FDIC) and National Credit Union Administration will also appear as witnesses today.)

Quarles has already submitted his written testimony to the House Financial Services Committee and it’s a humdinger. He writes that there is a “longstanding congressional practice” “of ensuring that public and private resources go toward their best, most efficient use.” He adds that this “approach informed the Banking Acts of 1933 and 1935…”

In reality, the Banking Act of 1933 (also known as the Glass-Steagall Act) was legitimate legislation that followed the 1929 stock market crash and onset of the Great Depression. It was enacted by a Congress that was genuinely intent on making sure that Wall Street could never again use bank depositors’ money to make reckless gambles in the stock market that left those banks insolvent and depositors’ destitute. The Banking Act of 1933 created federal deposit insurance for the first time while also banning deposit-taking banks from being under the same roof with Wall Street investment banks and brokerage firms.

The Banking Act of 1933 protected the financial system of the United States for the next 66 years until its repeal under the Wall Street-chummy Clinton administration in 1999. It took just 9 years after its repeal for Wall Street to get its hands on those deposits again and collapse the financial system, bringing on the greatest economic downturn since the Great Depression.

But what Congress did following the great crash of 2008 and subsequent years of economic suffering for millions of Americans was the exact opposite of what Congress had done in the Banking Act of 1933. Instead of barring deposit-taking banks that were under the Federal deposit insurance umbrella from being part of the Wall Street casino, Congress sat back and allowed these so-called “universal banks” to become even larger and a greater threat to the country. JPMorgan Chase (which is a huge Wall Street trading firm as well as owning large, insured, deposit-taking banks like Chase and the former Manufacturers Hanover, Chemical Bank and Bank One) was allowed to buy Bear Stearns and Washington Mutual during the financial crisis.

While the Congress of 1933 had already held three years of intense hearings to uncover the corrupted structure of Wall Street that had led to the Great Depression before passing the Banking Act of 1933, the U.S. Congress that passed the Dodd-Frank financial reform legislation on July 21, 2010 did so before Congress even knew the underlying causes of the crash or the insidious details of the Fed’s bailout.

The official report from the Financial Crisis Inquiry Commission was not published until January 2011. The audit of the secret trillions of dollars in loans that the Federal Reserve had made to both Wall Street and foreign trading houses was not released by the Government Accountability Office (GAO) until July 21, 2011.

But the GAO report covered only some of the Fed’s secret loans, which tallied up to $16.1 trillion. When more of the Fed’s secret funding was included, the Levy Economics Institute reached a tally of over $29 trillion – all to resurrect a financial system that by its very structure was doomed to fail again and destroy the U.S. economy.

But the most outrageous statement in Quarles’ written testimony is this:

“The Board’s latest Supervision and Regulation Report, which we published last week, confirms the current health of the banking system. It depicts a stable, healthy, and resilient banking sector, with robust capital and liquidity positions… It describes steady improvements in safety and soundness, with a gradual decline in outstanding supervisory actions at both the largest and smallest organizations.”

How healthy can the banking system be when it requires hundreds of billions of dollars in loans from the Federal Reserve on a weekly, ongoing basis?

Also, there has not been a decline in supervisory actions at Wall Street’s behemoth banks. The opposite is true. Since the toothless Dodd-Frank financial reform legislation was enacted in 2010, JPMorgan Chase, a bank holding $1.6 trillion in deposits, has been hit with three criminal felony counts, to which it pleaded guilty. It is currently under a wide-ranging criminal investigation for allowing its precious metals trading desk to operate as a racketeering enterprise with multiple traders criminally charged under the RICO statute, which is typically reserved for organized crime figures. JPMorgan Chase is supervised by the New York Fed.

As proof that these Wall Street casinos are gambling with depositors’ life savings, in 2013 it was disclosed by the U.S. Senate’s Permanent Subcommittee on Investigations that JPMorgan Chase had used hundreds of billions of dollars of its depositors’ money to make high-risk gambles in derivatives in London. Those gambles resulted in at least $6.2 billion in losses of depositors’ money.

Goldman Sachs, which is a bank holding company supervised by the New York Fed, has been criminally charged in Malaysia for its involvement in one of the largest financial scams in history, known as the 1MDB scandal.

Citigroup, which received the largest secret bailout in U.S. history from the Federal Reserve during the financial crisis, is also an admitted felon, having pleaded guilty to its role in rigging foreign currency markets in 2015. Just last week it was fined £44 million by the Bank of England for failing to provide an accurate picture of its financial position from 2014 to 2018. Citigroup is also supervised by the New York Fed.

And according to a report on Thanksgiving Day by Bloomberg News, Morgan Stanley has experienced unreported trading losses of upwards of $140 million. Morgan Stanley is also a bank holding company which is supervised by the New York Fed. It owns two federally-insured, deposit-taking banks.