While the Democrats focused on the continuing predatory practices of U.S. banks and the Federal Reserve’s coziness with those same banks, three Republicans at yesterday’s House Financial Services Committee hearing delved into why the Federal Reserve is showering Wall Street’s trading houses with super cheap loans on the pretext that it’s simply part of the Fed’s routine monetary operations.

Since September 17, the Federal Reserve, through its New York Fed branch, has been funneling hundreds of billions of dollars each week to Wall Street’s trading houses, intervening in what had been a private overnight lending operation (called repurchase agreements or repo loans) between banks and other financial institutions. Since September 17, the Fed loans have grown in both size and duration with some loans extended out as far as 42 days – suggesting to many on Wall Street that there is one or more banks in trouble that peer banks simply don’t want to lend to. The Fed, however, has stuck to the mantra that this is just a routine response to a liquidity blip.

The Republican Co-Chair of the Committee, Congressman Patrick McHenry (R-NC), began the questioning on the repo matter early in the hearing, asking the Fed’s Vice President for bank supervision, Randal Quarles, to explain what has necessitated these loans on the part of the Fed. Quarles responded:

“There were a complex set of factors that contributed to those events in September. Not all of them were related to our regulatory framework. But I do think that as we have considered what were the driving factors in the disruption in the repo market in September, we have identified some areas where our existing supervision of the regulatory framework, less the calibration or structure of the framework itself, may have created some incentives that were contributors.

“They were probably not the decisive contributors but they were contributors. And I think we need to examine them. Particularly among them are the internal liquidity stress tests that we run that create a preference, or can create a preference at some institutions, for central bank reserves over other liquid assets including Treasury securities for the satisfaction of their liquidity requirements under the liquidity framework that’s put in post the crisis.”

This garbled response, which effectively said nothing, triggered a request for clarification from McHenry. Quarles answered:

“The regulation was intended to be structured so that banks would be indifferent between central bank reserves and other forms of liquid assets, particularly Treasury securities in satisfying their High Quality Liquid Asset (HQLA) retention requirements and the Liquidity Coverage Ratio (LCR) itself does not make any distinction.”

McHenry responded that there appears to be a distinction. Quarles said:

“Some banks, from their internal assessment of how their liquid assets will perform in a future period of stress have put a heavy emphasis on central bank reserves as the most liquid assets. Treasury securities take a day to settle, markets can be disrupted in the event of extreme unexpected events. So that does create a thumb on the scale for central bank reserves. So I think it is worth reviewing, and we are reviewing some of these supervisory measures.”

Later in the hearing, Congressman French Hill (R-Arkansas) brought up the Fed’s repo loans again, saying that he had had discussions on this matter with Quarles over “the last few weeks.” Hill wasn’t buying Quarles’ earlier response to Congressman McHenry. Hill said:

“When you see the amount of the reserves held by the banks they’re extensive; they’re far above any requirement by the Dodd-Frank rules. The four largest banks collectively have more cash with the Fed than the next 24 combined. How does the Fed make clear to the banks that interday lending is a good thing, that is, that other banks have access to those amounts of cash that are far in excess of what they need regulatorily.”

Quarles said the Fed is looking at its supervisory role to make sure it is not creating incentives for “hoarding” by these big banks. (Clearly, the biggest banks are hoarding and/or backing away from questionable financial institutions that they don’t want to lend to.)

Congressman Warren Davidson (R-Ohio) asked about the Fed “injecting $100 billion or so a day into the repo market” and asked Quarles “Do you see a moral hazard in that?”

Quarles said “I don’t think actually that there is a moral hazard there.” Quarles also explained that as the Fed has reduced the level of reserves it always expected to eventually see a price response – meaning that there would be a spike in the overnight borrowing rate as the amount of available reserves to lend out shrank.

Davidson then said: “Well how would the price response happen correctly if the Fed intervenes. So you’re preventing the market from functioning, in a way, because of the Fed intervention. And when you look at the purpose of the hearing, I think that nothing highlights better the fact that we might not have a regulatory framework dialed in correctly for financial institutions than the fact that our repo market is in chaos right now and the only way to bridge that gap is essentially, print money….”

The real repo rate spiked to 10 percent on September 17. Since then the Fed has been artificially creating a cheap repo loan market, loaning money out at 1.55 percent as of this morning’s operation. That’s a profit windfall for the unnamed Wall Street trading houses that are getting these loans. 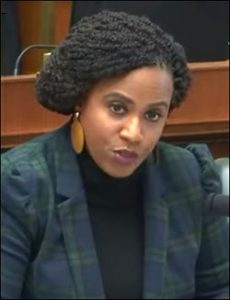 Congresswoman Ayanna Pressley (D-Massachusetts) drew awkward and uncomfortable responses from Quarles by bringing up a weekend New York Times article that pointed out his closeness to the mega trading houses on Wall Street – the same ones that the Fed is showering with these super cheap loans. The exchange went as follows:

Pressley: “We have a government structure to work one way for banks and businesses and another for consumers and working families. That’s why I pushed the Federal Reserve to provide everyday consumers with the same settlement services it already provides for banks. Working families shouldn’t have to wait 3 to 5 days for a check to clear. Now Mr. Quarles, you were the lone dissenter in the Federal Reserve’s decision to develop FedNow, which was heralded by small businesses and consumer groups alike. I do believe that how one chooses to spend their time reflects what they value, and, more importantly, who they value.

“Mr. Quarles, over the weekend the New York Times published a profile on your regulatory approach. And notably, you have chosen to spend your time in this role — in your first 21 months in office you met with Goldman Sachs 24 times; you met with JPMorgan 19 times; you met with Morgan Stanley 17 times; and with Citi[group] 12 times. In that same time frame, how many consumer groups did you meet with?”

Quarles: “Over the course of my first 21 months in office I met with approximately, at a conservative estimate, 15,000 to 20,000 people. The great majority of those – you’ve noted that 26 of those were Goldman Sachs [Congresswoman Pressley actually said 24 meetings were held with Goldman Sachs] out of 15 to 20,000 people, again at a conservative estimate, that’s 14/100ths of one percent of my time was spent with that and the other 99.86 percent of my time was spent with others.”