Congress Held a Hearing on the Fed’s Bailout of the Repo Market: Here’s Why You Haven’t Heard About It 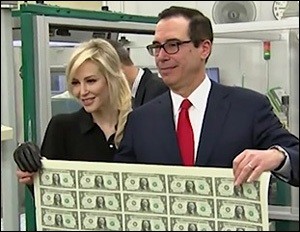 Actress Louise Linton and Husband, U.S. Treasury Secretary Steve Mnuchin Showing Off His Signature on U.S. Currency at the Bureau of Engraving and Printing in 2017

Last Thursday, U.S. Treasury Secretary Steve Mnuchin was the sole witness called before the House Financial Services Committee to answer questions on the state of financial stability in the U.S. Under the Dodd-Frank financial reform legislation of 2010, the U.S. Treasury Secretary also heads the Financial Stability Oversight Council (F-SOC) which is charged with monitoring any threats to the stability of the U.S. financial system in order to prevent a replay of the epic financial crash of 2008 and attendant devastation to the U.S. economy.

During the hearing, Mnuchin was grilled time and again by numerous Republicans and Democrats on what is necessitating the Federal Reserve Bank of New York (New York Fed) to be pumping out hundreds of billions of dollars per week to Wall Street trading houses via the repurchase agreement (repo loan) market.

But instead of reporting on that critical line of questioning and Mnuchin’s lack of meaningful answers, when the New York Times reported on the hearing it focused instead on a tiny aspect of the hearing. Its headline read: “U.S. Objects to World Bank’s Lending Plans for China.” It made no mention at all of the still unexplained but ongoing repo crisis on Wall Street.

Since the repo lending crisis started on September 17, when major Wall Street banks simply backed away from overnight lending to some financial institutions, forcing loan rates to spike to 10 percent from approximately 2 percent, the New York Times has written exactly one article on this new financial crisis. Wall Street On Parade has written more than three dozen articles on this critical topic.

During last Thursday’s hearing, Mnuchin attempted to pass off the repo loan crisis as a two-day event that occurred on September 16 and 17. The lack of reporting on the matter by the New York Times would tend to support that narrative in the public’s mind.

The reality is that the New York Fed has now pumped a cumulative total of more than $4 trillion into this black lending hole on Wall Street and has been making upwards of $100 billion a day in loans to Wall Street trading houses every business day since September 17.

During the almost three months that the New York Times has not reported on this flashing red sign of a new crisis on Wall Street, the Federal Reserve has dramatically increased its original level of support to the repo market. It has expanded its overnight loans to include loans of up to 43 days; it has increased the dollar amount of overnight loans to as much as $120 billion available daily; and it has announced that it will be buying $60 billion a month in U.S. Treasury Bills, effectively creating a new round of Quantitative Easing (QE-4) – a tactic it has not used since the financial crisis.

Congressman Ed Perlmutter (D-Colorado) had one of the more enlightening exchanges with Mnuchin. Perlmutter asked Mnuchin how Wall Street banks could have had record profits last year and not be able to lend this year. The Q&A went like this:

Perlmutter: “My questions are going to go back toward repos and repurchases, because there are some flags here. And, you know, last year banks had the most profits they’ve had in forever. In part because of the big tax cuts and stuff like that. But huge profits, and at the same time, we saw the excess reserves of the banks decline by 3 percent since 2017, and at the same time as the Fed and Treasury were sort of shrinking the balance sheet, all of a sudden over the last few months have expanded again. I don’t understand how those all come together…”

Mnuchin: “I’m happy to address it again because it is a very important issue. I don’t want to minimize it. Again, as recently as yesterday at F-SOC, we had a presentation from the Federal Reserve Bank of New York. I think there’s a lot of different issues that came together on those two days that caused the spike. It was not any one single issue but we are studying it carefully to make sure that this doesn’t occur again and to make sure it doesn’t occur on a prolonged basis. The banks are having very good profits mainly because the U.S. economy is performing very well. I don’t think this has to do with an issue of bank profits. This has to do with an issue of bank liquidity. There is plenty of liquidity – enough to go in and take up the repo. But they [the banks] didn’t want to do it. The reason they didn’t want to do it had to do with different regulatory tests that fit together…”

Perlmutter: “Those were sort of the things that led up to the recession ten years ago. All of a sudden there was this illiquid setting of our banks. And then everybody started getting nervous and the rate securities went to heck and everything else started closing in. And I guess it just doesn’t add up for me. We’re making money over here but we’re shrinking. But all of a sudden, the reserves are shrinking like crazy…It isn’t just two days, it’s been happening for months.”

Congressman French Hill (R-Arkansas) made this statement to Mnuchin:

Hill: “I think the concern is that the New York Fed is not supporting the repo market. They are the repo market. I think that’s the challenge. And we don’t see the bank reserves that are more than adequate – billions more than needed, on JPMorgan, for example, $120 billion in daily cash held at the Fed on a $60 billion cash requirement, and yet they’re not entering that repo market.”

Congresswoman Katie Porter (D-California) brought up one of the foreign banks that Wall Street banks are heavily leveraged to via derivative trades, which is rumored to be one of the reasons banks are backing away from lending. Porter had this to say:

Porter: “In June 2017, Treasury issued a report on banking deregulation. It suggested that if Congress raised the $50 billion threshold above which U.S. banks are subject to stricter oversight, that Congress ought to do the same for foreign mega banks. Earlier this year the Fed followed that Treasury recommendation and massively deregulated foreign mega banks. That was an item on a wish list that you published in 2017. There’s a lot that concerns me about this but the most glaring for me is about Deutsche Bank. I’m sure you’re familiar and the Chairwoman [Maxine Waters] is very familiar with Deutsche Bank – they would now only need to submit their living will once every six years. This is the same Deutsche Bank that within the last six years had a surprise $3 billion quarterly loss. I don’t know how you lose $3 billion and not see that coming; has failed its stress test in three of the last four years; was fined for a mirror trading scandal involving laundering money for Russian oligarchs; admitted to participating in Libor interest rate market-rigging scandals and violated the U.S. sanctions laws against Iran, Libya, Syria and the Sudan. Why are you advocating and why did you advocate to deregulate one of the worst corporate recidivists operating in the U.S. banking system, particularly when it is not even a U.S. bank?”

Mnuchin said he shared her concerns about Deutsche Bank but that it would be inappropriate for him from a regulatory standpoint to comment on any specifics.

Porter then asked Mnuchin to state how many people work directly for the Financial Stability Oversight Council (F-SOC). Other members of the panel had earlier commented on how the Trump administration has gutted staffing and budgets for F-SOC and the Office of Financial Research.

After much beating around the bush, Mnuchin finally admitted that only about a dozen people work for F-SOC – the Federal agency that is supposed to be the alarm siren for dangerous risks to the U.S. financial system.

Congressman Roger Williams (R-Texas) has taken to demanding that each witness appearing before the House Financial Services Committee answer his question as to whether they are a capitalist. He asked the same question of Mnuchin at last Thursday’s hearing. Mnuchin said he was indeed a capitalist.

In what appeared to be a slap at Williams, Congresswoman Rashida Tlaib asked Mnuchin if he believed in socialism for corporations. After a pause, and after repeating her question to himself, Mnuchin said he did not.