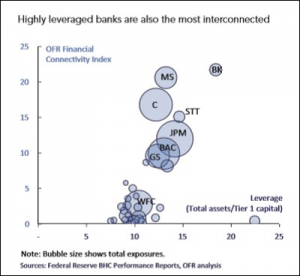 By Pam Martens and Russ Martens: December 9, 2019  Yesterday, the Bank for International Settlements (BIS) dropped a bombshell report that torpedoed the Federal Reserve’s official narrative on what has caused the overnight lending market (repo loan market) on Wall Street to seize up since September 17, leading to more than $3 trillion in cumulative loans from the New York Fed as lender of last resort.

The Federal Reserve has said the repo crisis was a result of corporations draining liquidity from the system to pay their quarterly tax payments alongside a large auction of U.S. Treasury securities settling and adding to the cash drain. That excuse was clearly bogus since the Fed has provided hundreds of billions of dollars weekly into the repo market since September 17, while stating that it plans to continue this activity into next year.

The BIS report dropped the bombshell that the “US repo markets currently rely heavily on four banks as marginal lenders.” Curiously, the BIS report was too timid to name the banks.

As Wall Street On Parade has regularly pointed out, there are more than 5,000 Federally-insured banks and savings associations in the U.S. but the bulk of the assets, derivatives and risk to U.S. financial stability are concentrated at just a handful of Wall Street’s “universal” banks — those making high risk trading gambles while also owning federally-insured, deposit taking banks. Ranked by assets, as of June 30, 2019, those are the bank holding companies of JPMorgan Chase, Bank of America, Citigroup, Wells Fargo, Goldman Sachs Group, and Morgan Stanley. Those six Wall Street banks hold $8.9 trillion of the $18.56 trillion in assets at the 5,213 federally-insured banks and savings associations in the U.S. That’s six banks holding 48 percent of the total assets of 5,213 banks.

The risks posed by a handful of banks in the derivatives market is even more concentrated. According to a quarterly report from the federal regulator of national banks, the Office of the Comptroller of the Currency (OCC), just five banks control 82 percent of the $280 trillion in notional (face amount) of derivatives at the 25 largest bank holding companies. Derivatives played a critical role in blowing up Wall Street banks in 2008 and resulted in the largest taxpayer and Federal Reserve bailout of any industry in U.S. history.

Despite that epic crisis, which produced the worst economic downturn in the United States since the Great Depression, Wall Street lobbyists have continued to stymie meaningful reform and have actually convinced the Trump administration to engage in weakening the inadequate regulations that Congress passed in 2010 under the Dodd-Frank financial reform legislation.

One of the myriad ways that Dodd-Frank has been weakened was to gut the staffing and budget of the Office of Financial Research (OFR) which was created under Dodd-Frank to provide an early warning system of emerging risks to financial stability in the U.S. banking system.

OFR provided a dire warning of the risks of bank concentration in a report it issued in 2015. The OFR researchers found:

The OFR researchers also found in the same report that:

This interconnectedness of a handful of U.S. mega banks was called out earlier in a 2011 paper on the 2008 financial crisis prepared for the Money and Banking Conference in Buenos Aires by financial researcher Jane D’Arista. She wrote:

“Interconnectedness is one of the critical clusters of related causes of the crisis. It resulted from the extraordinary growth in indebtedness within the financial sector that facilitated higher leverage ratios and rising levels of speculative trading for institutions’ own accounts. As the amount of short-term borrowing and lending among financial institutions expanded, markets for repurchase agreements and commercial paper became primary funding sources, forging a chain that linked the fortunes of many institutions and various financial sectors to the performance of a few of the largest and exacerbated systemic vulnerability. Increased profits and compensation masked the growing vulnerabilities in the system but the crisis outcome was inevitable given:

— the buildup of unsustainable debt for individual institutions and the system as a whole;

— systemic undercapitalization as inflated on- and off-balance sheet positions increased risk from falling prices and the potential loss of funding, and;

— the heightened potential for loss of confidence as opaque markets for funding and OTC derivatives increased uncertainty about prices, volumes of transactions and the positions of counterparties.”

The problem with all of the narratives that have surfaced thus far on the repo loan crisis is that this market historically has turned over $1 trillion daily in loans in the U.S. Since the Fed is only providing approximately $100 billion a day, clearly the biggest banks and money market funds are making loans to those counterparties that they believe are good risks. This supports the thesis from Wall Street On Parade that the biggest banks are backing away from lending to those institutions that are deemed a bad risk or are heavily interconnected to an institution deemed to be a bad risk – even for an overnight loan since the institution could file for intraday bankruptcy.

This is precisely the scenario that led to credit seizing up and banks refusing to lend to one another in 2008.

Adding to the thesis that the crisis is not improving, during questioning by the House Financial Services Committee last Thursday, U.S. Treasury Secretary Steve Mnuchin said that the New York Fed was called before the Financial Stability Oversight Council (F-SOC) last week to answer questions on what has happened to the proper functioning of the repo loan market. F-SOC is made up of the heads of every major federal regulator of banks and Wall Street. It was also created under the Dodd-Frank financial reform legislation to prevent another epic financial crisis like that of 2008.