What Are They Smoking at CNBC? 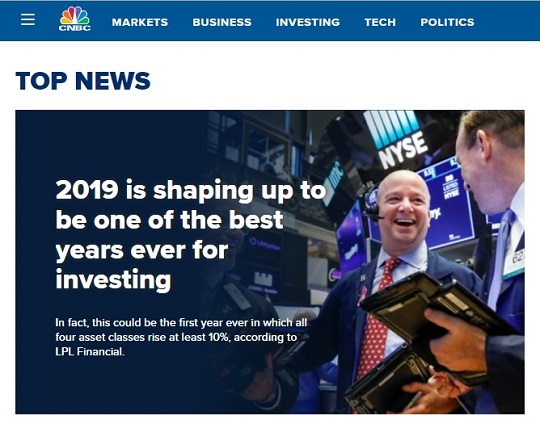 Yesterday, the headline above appeared at CNBC. The headline writers there must be living in an alternative reality.

Let us remind CNBC viewers what 2019 is actually shaping up to be: it’s the year that the highest priced stock in the price-weighted Dow Jones Industrial Average, Boeing, can’t figure out how to safely fly the plane, the 737 Max, that it has sold to airlines around the world. The stock charts of two of the biggest IPOs of the year, Uber and Lyft, look like crash landings themselves. Another much hyped IPO, WeWork, couldn’t achieve liftoff because its Chairman and CEO was engaging in shady self-dealings with the company. And yet, despite Adam Neumann’s disastrously failed management of his company, SoftBank paid him $1.7 billion to take a hike as thousands of about-to-be fired workers looked on in disgust. And, we should add, despite two of the biggest names on Wall Street, JPMorgan Chase and Goldman Sachs, putting their names as the lead underwriters on the legal prospectus for WeWork’s IPO, its valuation turns out to have been inflated by 83 percent and it was just months away from running out of cash.

Adding to the “what are they smoking at CNBC” laundry list, the IMF is projecting that the world economy will grow this year at the slowest pace since the financial crash of 2008. And there is that not-so-small matter of the U.S. central bank, the Federal Reserve, hurling hundreds of billions of dollars a week at Wall Street’s trading houses for the first time since the last financial crisis, with no questions being asked by mainstream journalists or Congress.

All pesky details apparently to the headline writers at CNBC.