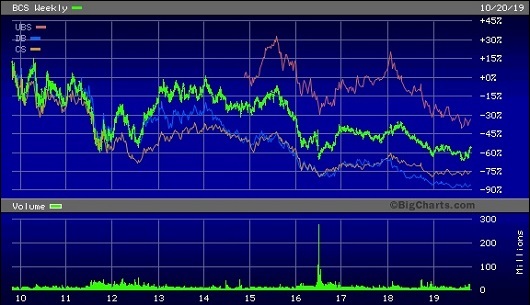 Memories are apparently very short at the Securities and Exchange Commission (SEC). The SEC seems to have forgotten that a run on money market funds holding bank commercial paper set off a panic after the Lehman Brothers bankruptcy filing on September 15, 2008. The government had to step in and guarantee the funds.

Despite those disastrous days, the SEC has allowed money market funds being sold in the U.S. to hold a staggering $642 billion in the instruments of foreign banks, as of September 30, 2019. It categorizes those instruments as: certificates of deposits, time deposits, sponsored asset-backed commercial paper, and repurchase agreements (repos) where the bank is the counterparty.

Just one year ago, on September 30, 2018, that exposure stood at $666 billion for U.S. and foreign banks, meaning that there has been a 29 percent increase in banks funding themselves through money market funds over the past 12 months.

The data comes from the September 30, 2019 “Money Market Fund Statistics” report compiled by the SEC.

Money market funds are supposed to be a safe and liquid place for investors to hold money that they can access on a moment’s notice without worry that the value will drop or withdrawals will be frozen. But this is how the official report from the Financial Crisis Inquiry Commission (FCIC) describes what happened in 2008 because money market funds had also loaded up on instruments from banks as opposed to U.S. Treasury securities backed by the U.S. taxpayer:

“In March 2006, the [Reserve Primary Fund] had advised investors that it had ‘slightly underperformed’ its rivals, owing to a ‘more conservative and risk averse manner’ of investing— ‘for example, the Reserve Funds do not invest in commercial paper.’ But immediately after publishing this statement, it quietly but dramatically changed that strategy. Within 18 months, commercial paper grew from zero to one-half of Reserve Primary’s assets. The higher yields attracted new investors and the Reserve Primary Fund was the fastest-growing money market fund complex in the United States in 2006, 2007 and 2008 — doubling in the first eight months of 2008 alone…

“On September 15, when Lehman declared bankruptcy, the Primary Fund’s Lehman holdings amounted to 1.2% of the fund’s total assets of $62.4 billion. That morning, the fund was flooded with redemption requests totaling $10.8 billion… investors requested an additional $29 billion later on Monday and Tuesday, September 16…After the market closed Tuesday, Reserve Management publicly announced that the value of its Lehman paper was zero…Four days later, the fund sought SEC permission to officially suspend redemptions.”

The Reserve Fund was eventually liquidated. Numerous other money market funds during those days in September 2008 that held Lehman Brothers paper also “broke the buck,” meaning their net asset value traded below $1. But most of the sponsors of those funds deposited their own money to keep the net asset value at $1. Another notable fund halted redemptions. The FCIC reports:

“An early and significant casualty was Putnam Investments’ $12 billion Prime Money Market Fund, which was hit on Wednesday [September 17, 2008] with a wave of redemption requests. The fund, unable to liquidate assets quickly enough, halted redemptions. One week later, it was sold to Federated Investors. Within a week, investors in prime money market funds—funds that invested in highly rated securities—withdrew $349 billion; within three weeks, they withdrew another $85 billion. That money was mostly headed for other funds that bought only Treasuries and agency securities; indeed, it was more money than those funds could invest, and they had to turn people away…As a result of the unprecedented demand for Treasuries, the yield on four-week Treasuries fell close to 0%, levels not seen since World War II.”

Since money market funds did not know which Wall Street bank might be the next Lehman, but they certainly suspected Citigroup was in the running, they simply refused to buy any more commercial paper from banks. That led to an unprecedented spike in the cost to commercial paper borrowers and a further seizure in credit markets.

The government decided to step in to prevent a full-scale panic. The U.S. Treasury guaranteed the $1 net asset value of money market funds in exchange for a fee that was paid by the funds. The Federal Reserve added support by providing loans to banks to purchase the commercial paper from money market funds to help them meet withdrawal requests.

This level of exposure to bank paper within U.S. money market funds comes at a time when global banks have announced 68,000 job cuts and the Federal Reserve is funneling hundreds of billions of dollars a week in cheap loans to Wall Street securities firms without any meaningful explanation to the American people as to why it is needed.

As the chart above indicates, foreign global banks such as Barclays, UBS, Deutsche Bank and Credit Suisse are trading close to their all-time lows. In the U.S., JPMorgan Chase’s precious metals desk has been declared a criminal enterprise by the U.S. Department of Justice, three traders on that desk have been indicted under RICO charges and according to prosecutors in Federal Court this past Tuesday, at least one more indictment in the matter is coming within the next 30 days.

Goldman Sachs’ was criminally indicted in Malaysia and its bankers are also under an ongoing criminal probe in the U.S. and Malaysia over their role in the 1MDB scandal.

Money market fund investors across America are not likely to know any of this news because it just never seems to make it to the front pages of U.S. newspapers, which also just happen to be owned by corporations that rely on these global banks for loans and stock and bond underwritings.