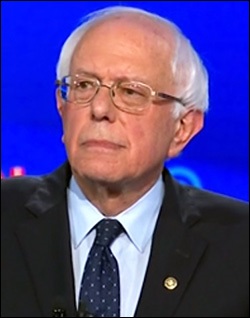 During last evening’s Democratic debate, Senator Bernie Sanders said this: “You’ve got three people in America owning more wealth than the bottom half of this country.”

According to Politifact, Sanders is basing this claim on a 2017 study done by the Institute for Policy Studies which put the richest three Americans’ wealth as follows (based on the Forbes list of billionaires at that time): Bill Gates of Microsoft with $89 billion; Jeff Bezos of Amazon with $81.5 billion; and Warren Buffett of Berkshire Hathaway with $78 billion — for a total of $248.5 billion. That wealth figure contrasts with the $245 billion owned by the bottom 50 percent of Americans according to the 2016 Survey of Consumer Finances conducted by the Federal Reserve. (The Fed’s survey is conducted every three years and the 2019 study has not yet been released.)

The new tally for the three billionaires is $303.4 billion or a whopping $58.4 billion more than the bottom 160 million Americans, which includes one in every four children who live below the Federal poverty level.

But it only takes adding two more billionaires to make the picture even more oligarchic. Those additional two rank number 4 and 5 on Forbes’ billionaire list this morning: Mark Zuckerberg of Facebook with $69.6 billion; and Larry Ellison, co-founder of Oracle, with a net worth of $65.8 billion. The top five billionaires currently have a net worth of $438.8 billion or $193.80 billion more than the bottom 160 million Americans.

All of these billions of  dollars of net worth came from the publicly traded stocks of these companies on Wall Street.

Equally alarming, a good case can be made that Facebook and Amazon are negatively impacting the public interest. Facebook seems to be increasingly a surveillance system stomping on the privacy rights of Americans while Amazon is using its market dominance to put Main Street stores and retail chains out of business.

And another curious thing about Bezos’ wealth is that Wall Street allowed Amazon to remain alive despite the lack of profits for two decades. A December 18, 2013 headline in the International Business Times reads: “Amazon: Nearly 20 Years In Business And It Still Doesn’t Make Money, But Investors Don’t Seem To Care.” It’s not that investors didn’t care, it’s that Wall Street’s analysts told investors not to care. Wall Street banks have tried to pull off this same alchemy with WeWork’s IPO and simultaneously christen its CEO, Adam Neumann, a newly minted billionaire.

How many Americans living in poverty could also become obscenely rich if Wall Street was willing to finance their money-losing company for two decades until they stumbled on how to make money. 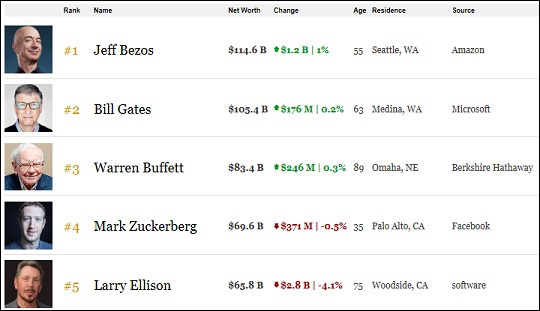 Five Richest Americans According to Forbes on September 13, 2019 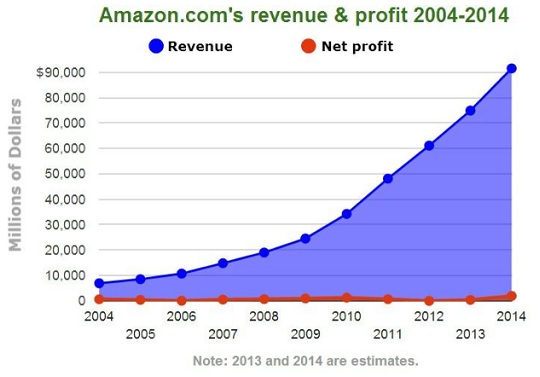 Wealth Inequality in America as of 2009 (It’s Worse Today)