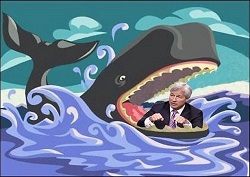 The WeWork IPO preliminary prospectus was filed last week with the Securities and Exchange Commission (SEC) and the company has been getting savage reviews ever since. WeWork is a commercial real estate company leasing out office space but is attempting to mesmerize the public into believing it is some genius new-age thinker.

JPMorgan Securities LLC, a unit of JPMorgan Chase, and Goldman Sachs & Co. are listed as lead underwriters on the IPO. Scott Galloway, a professor at NYU’s Stern School of Business, wrote on his blog that “bankers (JPM and Goldman) stand to register $122 million in fees flinging feces at retail investors….”

What has not been crystallized as yet, however, is how Jamie Dimon, Chairman and CEO of the largest bank in the U.S., JPMorgan Chase, sits smack in the middle of this mess. Dimon should definitely have seen this mess coming. Dimon was co-CEO of Salomon Smith Barney when it began its super chummy relationship with Bernie Ebbers of WorldCom, which ended in multi-billion dollar legal settlements by Citigroup, Salomon Smith Barney’s parent, and Ebbers serving a 25-year Federal prison sentence.

The WeWork IPO prospectus (the company will officially be called The We Company) uncannily channels the relationship that Salomon Smith Barney (SSB) and Citigroup had with Ebbers. To ostensibly get Worldcom’s investment banking business, Ebbers received lots of favors from SSB and Citigroup. According to a 2003 lawsuit brought by Alan Hevesi, the Comptroller of New York State, SSB and Citigroup had provided $499 million in personal loans to Ebbers, some of it collateralized with Worldcom stock, which meant the bank had a conflicted incentive for the share price to do well and to tout the stock to public investors, even if it meant wearing due diligence blinders.

Compare that set of facts to this language in the WeWork IPO prospectus regarding the underwriters relationship with Adam Neumann, the Chairman and CEO of WeWork:

“UBS AG, Stamford Branch, JPMorgan Chase Bank, N.A. and Credit Suisse AG, New York Branch, affiliates of the underwriters in this offering, have provided a line of credit of up to $500 million to Adam Neumann, of which approximately $380 million principal amount was outstanding as of July 31, 2019. The line of credit is secured under a security and pledge agreement by a pledge of approximately  _____shares of our Class B common stock beneficially owned by Adam and held through WE Holdings LLC, of which Adam serves as a managing member. The line of credit has a scheduled maturity of September 18, 2020 and may be extended from time to time at the discretion of the lenders. The lenders have received and will receive customary fees and expense reimbursements in connection with the loan.”

Then there is this paragraph which suggests JPMorgan has gotten especially chummy with Adam Neumann:

“In addition, JPMorgan Chase Bank, N.A, an affiliate of J.P. Morgan Securities LLC, has made loans and extended credit to Adam Neumann totaling $97.5 million across a variety of lending products, including mortgages secured by personal property and unsecured credit lines and letters of credit.”

Hevesi’s lawsuit against WorldCom assessed its Board of Directors as follows:

“Among other things, the underwriters failed to conduct any due diligence to determine whether it had the means, intent, and ability to satisfy the staggering amount of debt it was accumulating…Had the bankers seriously weighed the import of the WorldCom board minutes, they would have seen what the Examiner and Special Committee found immediately apparent: the WorldCom board was nothing more than a ‘rubber stamp’ and was in no way an internal check and balance on WorldCom’s management.”

Compare that assessment of WorldCom’s Board with this statement in the WeWork prospectus:

Fortune magazine turned to Charles Elson, Director of the John L. Weinberg Center for Corporate Governance at the University of Delaware for his thoughts on this governance structure. Elson said: “It’s a mess any way you look at it from a governance standpoint.”

Bloomberg News published the assessment of Rett Wallace, CEO of Triton Research, who called the WeWork prospectus “a masterpiece of obfuscation,” citing, for example, the fact that “the company stops counting sales and marketing expenses at a given location once it’s been open for two years — but the spending doesn’t actually stop after that. Instead, it counts as an operating expense.”

Professor Galloway at NYU adds an additional point about WeWork’s $47 billion in long-term obligations versus its revenue stream, writing:

“WeWTF is an especially risky business going into a recession, when the ability to variabilize costs is limited, but revenue decline is unlimited. WeWTF has $47 billion in long-term obligations (leases) and will do $3 billion in revenue this year. What could go wrong?”

Jamie Dimon has somehow remained as Chairman and CEO of JPMorgan Chase despite three felony counts from the Justice Department on his watch, to which the bank pleaded guilty. The bank remains on probation until January 2020 for the last of the felony counts. Dimon also famously called the London Whale fiasco at his bank “a tempest in a teapot” at the time it was first disclosed in the press. The “teapot” turned into $6.2 billion in losses at Dimon’s Federally-insured bank from traders in London using bank deposits to make high-risk gambles in derivatives on subprime debt. That episode resulted in more than $1 billion in fines and settlements by the bank and a 300-page, highly unflattering assessment of incompetence in risk controls at the bank by the U.S. Senate’s Permanent Subcommittee on Investigations.

Unlike in the WorldCom matter, the underwriters and their highly-paid lawyers seem to have gone out of their way in the WeWork IPO prospectus to reveal the ugly warts and entrenched conflicts of interest. The theory today is if it’s revealed by the company to investors, it’s not illegal.

But JPMorgan Chase, as the largest bank in the U.S., and already a three-count criminal felon, does not need any more reputational damage. At some point, even Dimon’s snoozing Board is going to say “enough.”