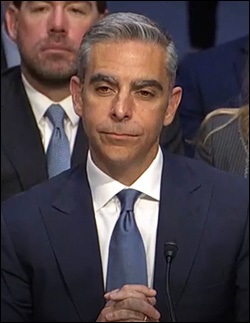 Yesterday the U.S. Senate Banking Committee assembled to hear Facebook’s David Marcus explain how the company wants to create a global digital currency called Libra, to be run by a Switzerland-based global organization called the Libra Association, made up of 27 members from the fields of payment systems, technology, telecommunications, blockchain services, venture capital, nonprofits and academic institutions.

Given Facebook’s serial history of abusing the privacy rights of its users and selling their data without their permission, not to mention its role in facilitating Russian interference in the 2016 presidential election, we immediately went to check out the names of the nonprofits that had signed up to monitor this sprawling international monetary system cooked up in a Facebook lab in a year’s time. We were hoping to see names like American Civil Liberties Union, Public Citizen, Consumer Federation of America, or Center for Constitutional Rights. No such luck. Here’s who Facebook lists under nonprofits, multilateral organizations and academic institutions: Creative Destruction Lab, Kiva, Mercy Corps, Women’s World Banking. We have to admit to ignorance of any of these groups.

At the end of the hearing, after Facebook’s Marcus had struggled to explain the checks and balances of his short-on-specifics plan, Senator Chris Van Hollen (D-MD) said he suspected that Americans were going to view this organization as something like Spectre (the evil international surveillance organization) from the James Bond movie series.

It felt like Van Hollen had just read our minds.

Senator Sherrod Brown (D-OH), the ranking member of the Committee, made opening remarks at the hearing that were so on-point and poignant to the interests and concerns of the American people that we’ve printed them in full below. 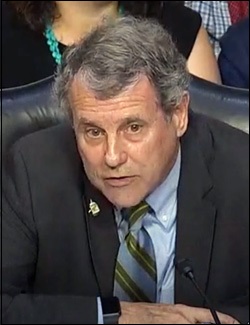 Now, Facebook might not intend to be dangerous – but they certainly don’t respect the power of the technologies they are playing with. Like a toddler who has gotten his hands on a book of matches, Facebook has burned down the house over and over, and called every arson a learning experience.

Facebook has two competing missions – make the world more open and connected, and make a lot of money. And as Facebook attempts to serve both of those missions, they wreak havoc on the rest of us.

Look at its version of disrupting the newspaper industry. Facebook has made it easier to share what you’re reading with friends. But at the same time, Facebook has redirected most of the media industry’s profits away from actual journalists and into its own coffers—and they have done it without the benefit of recreating the local news desk, without conducting the hard-nosed journalism that keeps politicians honest, and without meeting even the most basic journalistic standards.

This kind of “creative disruption” that doesn’t actually create anything is just disruption.

Or look at the impact Facebook’s profit motive has had on the way it connects people. Facebook and other tech companies will tell you that the internet just holds up a mirror to society, and reflects what is already there.

But that’s not true.

To be profitable, Facebook has juiced its algorithm to hold up a magnifying glass to society rather than a mirror – kind of like the way I learned in Boy Scouts to use a magnifying glass to burn a hole in a piece of wood – concentrating our focus on the most divisive issues, pushing the most controversial opinions to the top of our news feeds —usually those are posts that play on people’s fears and worst impulses, but they may not be based on any sort of fact.

Facebook does all it can to manipulate its billions of users so it can direct our eyes toward more ads and turn an even bigger profit.

And that emotional manipulation has led to horrifying results.

I don’t have to tell you what amplifying our divisions has done to discourse in this country – not just between political parties. I’d bet half the people in this room have had to block an old high school classmate or even a family member on Facebook.

Or look around the world. A UN report detailed how Facebook was used to spread propaganda in Myanmar that led to genocide. In the first month of violence, more than 600 members of the Rohingya people were killed – and more than 700,000 refugees had to flee the country.

I don’t think for a moment that Facebook created hate, but we know that their competing missions of connecting people and turning a profit created an algorithm and a business model that intensified it.

Today, we expect everyone to know that what happens online has consequences offline. It’s just common sense.

That’s why it’s so hard for us to understand why Facebook – the company that ushered in this revolution – doesn’t seem to comprehend that its actions have real world consequences. And they don’t seem to understand why their intention to run their own currency out of a Swiss bank account, the topic of today’s hearing, has been met with so much opposition.

And what kind of dystopian government wants to turn families and friends against each other rather than bring people together?…Well, maybe I shouldn’t answer that.

Facebook has demonstrated, through scandal after scandal, that it does not deserve our trust, and that it should be treated like the profit-seeking corporation it is, just like any other company.

He and his executives have proven over and over that they don’t understand governing or accountability.

They’re not running a government, they’re running a for-profit laboratory. No Facebook executives have been harmed by Facebook’s experiments. But look at what has happened everywhere that Facebook has run its social experiment on us.

Their motto has been “move fast and break things.” And they certainly have.

They moved fast and broke our political discourse, they broke journalism, they helped incite a genocide, and they’re undermining our democracy.

Now Facebook is asking people to trust them with their hard-earned paychecks. It takes a breathtaking amount of arrogance to look at that track record and think, you know what we really ought to do next? Let’s run our own bank and our own for-profit version of the Federal Reserve for the world.

I understand that given the financial crisis and given the massive inequality and unfairness to workers in our economy, it’s tempting to think anyone could do a better job than the Wall Street megabanks.

But the last thing we need is to concentrate even more power in huge corporations.

Look at Facebook’s record. We would be crazy to give them a chance to experiment with people’s bank accounts, and to use powerful tools they don’t understand, like monetary policy, to jeopardize hardworking Americans’ ability to provide for their families.

This is a recipe for more corporate power over markets and consumers, and fewer and fewer protections for ordinary people.

Thank you, Mr. Chairman, for holding this hearing.