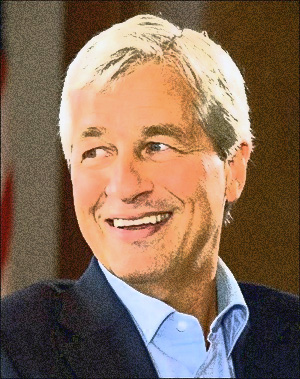 Yesterday afternoon, Jamie Dimon had his world rocked. And not in a good way. Dimon is the Chairman and CEO of the largest bank in the United States, JPMorgan Chase, which has over 5,000 retail branches blanketing the U.S. and has scooped up $1.6 trillion in deposits, much of it from moms and pops who have no idea that the bank is a three-time felon.

When you’re a 3-count felony bank and still on probation until January of 2020, you really don’t want to see your name appear in the New York Times connected to the most radioactive felon in the United States right now, Jeffrey Epstein, the man newly indicted on July 6 on charges of sex trafficking of underage girls and sexually assaulting dozens of them.

But that’s what happened yesterday afternoon. The New York Times published a story online that appears today in its New York print edition on the front page of the Business Section. Here’s the Defcon 1 part:

“When Jeffrey Epstein was serving time in Florida for soliciting prostitution from a minor, he got a surprising visitor: James E. Staley, a top JPMorgan Chase executive and one of the highest-ranking figures on Wall Street.”

We know Dimon was aware of the story before it hit the wires because the Times adds this: “Spokesmen for JPMorgan declined to comment on any aspect of their roughly 15-year relationship with Mr. Epstein.”

This high-powered Wall Street executive, Staley, didn’t have to demean himself by visiting Epstein in a jail cell, because for the last 10 months of the 13 months Epstein served of his “jail” sentence, he was allowed to spend 12 hours a day, six days a week at his “office” in West Palm Beach in a work release program. He was chauffeured to his office by his own private driver in his limousine. Epstein had at that time pleaded guilty to a felony charge and was, under the law, a sex offender of a minor. He did not qualify for a work release program.

An NBC affiliate in West Palm Beach, WPTV, has obtained 464 pages of deputy logs from the Palm Beach Sheriff’s office and reported on July 18 that “We saw they took him to his house at least nine times while he was on work release, and left him in his home unsupervised for up to three hours sometimes.”

The Palm Beach police had significant evidence in 2008 that Epstein was running a sex-trafficking ring out of his Palm Beach waterfront estate where at least three dozen underage girls had alleged they were sexually abused by him. The police had provided their evidence to the FBI but the Federal prosecutor involved with the case, Alex Acosta, agreed to a non-prosecution agreement and dropped the Federal case against Epstein, thus allowing him to get a sweetheart deal in a private wing of the Palm Beach County jail by the Palm Beach County State Attorney’s office. Acosta stepped down as Donald Trump’s U.S. Labor Secretary earlier this month in response to the public outrage.

A lawyer for some of Epstein’s victims, Brad Edwards, stated at a recent press conference that he had witness testimony that Epstein had engaged in sexual encounters at his office while on work release but not, as far as he knew, with underage girls. Palm Beach County Sheriff Ric Bradshaw has been forced by the public outcry to open an investigation into how Epstein received such cozy treatment.

There had to be something very hush-hush that JPMorgan’s Staley wanted to discuss in person with Epstein for him to forego the use of that modern invention called a telephone and visit a notorious child sex offender guarded by sheriff deputies at his “office,” where Staley had to sign a visitor’s log. Staley is currently the CEO of the British bank, Barclays, but he had spent more than 30 years of his career at JPMorgan Chase in a multitude of high level positions.

The Times suggests the reason for Staley’s visit was that “Epstein had funneled dozens of wealthy clients to Mr. Staley and his bank.” But JPMorgan had another peculiar link to Jeffrey Epstein that Wall Street On Parade has been investigating.

The ratings agency Moody’s reported on April 18, 2008 that Liquid Funding Ltd. had wound down. Epstein’s Chairmanship of Liquid Funding ended on March 19, 2007 according to documents leaked from the Appleby law offices, a law firm heavily involved in creating offshore accounts in tax havens.

It appears that Liquid Funding did wind down for a period of time but the leaked documents also show that it was resurrected by JPMorgan Chase in 2011 – three years after it had purchased Bear Stearns.

According to the leaked documents, which became known as the Paradise Papers, Liam MacNamara became Chairman of the Board of Liquid Funding on September 27, 2011 with an address of JPMorgan Bank Dublin Plc, 1 George’s Dock, Dublin, Ireland. According to the 2011 annual report of JPMorgan Bank Dublin, Liam MacNamara was its CEO at the time. MacNamara had apparently survived the ax when JPMorgan purchased Bear Stearns in 2008, when he had been joint chief executive of Bear Stearns Bank Plc, part of Bear’s operations in Ireland, and the entity that was named investment manager for Liquid Funding.

In March of this year the Irish Times reported that the JPMorgan Bank in Dublin “employs about 530 people” and had moved to new headquarters at 200 Capital Dock, with “the capacity to accommodate 1,100 workers.” The newspaper noted that Jamie Dimon was scheduled to officiate at the grand opening of the new headquarters. The bank is now called J.P. Morgan Bank (Ireland) Plc.

JPMorgan Bank (Ireland) has roots dating back to 1919 and merged Bear Stearns Bank Plc in Ireland into JPMorgan Bank (Ireland). JPMorgan Chase brags on its website that the bank “is the only EU passported bank in the non-bank chain of J.P. Morgan and provides the firm with direct access to the European Central Bank repo window.”

Last month, the Central Bank of Ireland fined a unit of  JPMorgan Bank (Ireland) $1.8 million for myriad violations, including “failure to have adequate control systems.”

Failure to have adequate control systems sounds a lot like what JPMorgan paid fines and settlements of over $1 billion for in the U.S. in connection with its London Whale scandal in 2012, where it lost $6.2 billion of its U.S. bank depositors’ money gambling in high-risk derivatives in London.