Elizabeth Warren Says Another Economic Crash Is Coming: Is She Right? 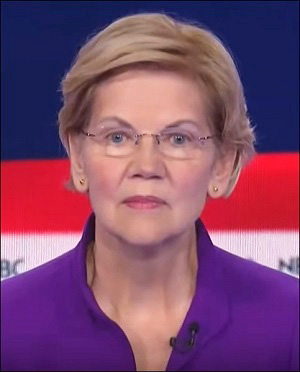 On Monday, Democratic presidential contender Senator Elizabeth Warren posted a column on Medium that carried the provocative headline: The Coming Economic Crash — And How to Stop It. Warren’s column came just 11 days after we titled our own article: Is There a Stealth Financial Crisis? Alarm Bells Are Ringing.

Warren wrote about economic trends like the fact that the U.S. manufacturing sector is already in recession and the staggering amount of household and corporate debt. We wrote about the striking similarities to the early warning signs that ushered in the 2008 financial crash and those happening right now: like being locked out of withdrawing money from a mutual fund because of a run on the fund and an inability to find a buyer for its illiquid investments; and a major international bank firing a big chunk of its labor force and putting tens of billions of dollars of its toxic assets in a “bad bank” as its publicly traded stock heads toward zero. (It was Citigroup in the last crisis; it’s Deutsche Bank right now. And like Citigroup in 2008, Deutsche Bank is deeply interconnected to Wall Street’s mega banks.)

Warren is one of the leading contenders to snag the Democratic nomination for President and therefore must offer hope to the populace — thus the title of her column suggests that there’s a way to stop the impending economic crisis. There isn’t and Warren knows that. What Warren proposes are ways to lessen the economic impact on average Americans.

Warren has proven herself to be one of the most knowledgeable members of the Senate Banking Committee since 2013, particularly when it comes to the insidious and highly-leveraged risk taking on Wall Street. She knows there is not going to be any way to stop the Wall Street train wreck once it’s in motion. That’s because despite the pivotal role that derivatives played in deepening the epic financial collapse that began in 2008, derivatives have not been brought under control by either Congress or Federal regulators of Wall Street.

The Dodd-Frank financial reform legislation of 2010 attempted to reduce the risk that tens of trillions of dollars in derivatives posed to the federally-insured banks that had merged with the casino-like investment banks on Wall Street by requiring that the insured banks “push out” the derivatives to an uninsured unit of the bank holding company, which could, theoretically, be unwound or placed into bankruptcy without bringing down the commercial bank. (The only meaningful solution is to simply legally separate insured banks from the Wall Street casino but the Obama administration punted on that. Warren is a major supporter of that idea.)

So in December 2014, Citigroup had its cronies in Washington sneak an amendment into the must-pass omnibus spending bill that was critical to keeping the government running through September. That amendment, to this very day, has not been repealed by Congress and has kept high-risk derivatives, including the same kind of credit default swaps that dramatically deepened the crisis in 2008, within the taxpayer-backstopped commercial bank.

At the peak of the crisis on September 30, 2008, the top 25 bank holding companies held $184.7 trillion notional (face amount) in derivatives. As of March 31, 2019, that figure stood at $272.5 trillion according to reports by the regulator of national banks, the Office of the Comptroller of the Currency. Even more frightening, 86 percent of the $272.5 trillion is concentrated at just five banks, which are, in turn, highly interconnected to one another. Those five bank holding companies are: JPMorgan Chase, Citigroup, Goldman Sachs Group, Bank of America and Morgan Stanley.

No one fought harder than Senator Warren to stop Citigroup’s devious plot in 2014. She delivered three impassioned speeches on the Senate floor, including the following remarks in her last speech on December 12, 2014 to stop the dangerous amendment:

“Mr. President, I’m back on the floor to talk about a dangerous provision that was slipped into a must-pass spending bill at the last minute to benefit Wall Street. This provision would repeal a rule called, and I’m quoting the title of the rule, “Prohibition Against Federal Government Bailouts of Swaps Entities.”…

“Another recent Chairman of the Office of Management and Budget is also a Citi alum — but I’m double counting here because now he’s the Secretary of the Treasury.

“That’s a lot of powerful people, all from one bank. But they aren’t Citigroup’s only source of power.  Over the years, the company has spent millions of dollars on lobbying Congress and funding the political campaigns of its friends in the House and the Senate.

“Citigroup has also spent millions trying to influence the political process in ways that are far more subtle — and hidden from public view. Last year, I wrote Citigroup and other big banks a letter asking them to disclose the amount of shareholder money they have been diverting to think tanks to influence public policy.  Citigroup’s response to my letter? Stonewalling. A year has gone by, and Citigroup didn’t even acknowledge receiving the letter…”

Watch Senator Warren’s full speech in the video below.

Wall Street Has Placed a Derivatives Noose Around the U.S. Insurance Industry