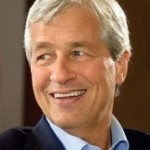 Federal Reserve inspectors appear to be on some kind of mind-altering drug or their superiors are simply taking their marching orders from Wall Street cronies in the Trump Administration.

Yesterday the Fed released a terse 104-word statement indicating that the largest and serially charged bank in the U.S., JPMorgan Chase, had shown “evidence of substantial improvements” in its “risk-management program and internal audit functions” and the Fed was therefore removing the dog collar it had put on the bank in January 2013. (JPMorgan Chase had been required to provide written progress reports to the New York Fed in 2013 until further notice – which became six years.) The Fed’s actions in 2013 stemmed from JPMorgan Chase secretly gambling with depositors’ money in exotic derivatives in London and losing at least $6.2 billion of those funds. The incident became infamously known as the London Whale saga after reporters at Bloomberg News and the Wall Street Journal broke the story about the massive, market-distorting derivative trades.

The regulator of national banks, the Office of the Comptroller of the Currency, charged JPMorgan Chase in the London Whale episode with engaging “in unsafe or unsound banking practices.” That charge is a very big deal for a bank holding $1.58 trillion in deposits, much of which is owned by mom and pop savers and backstopped by the U.S. taxpayer.

Yesterday’s statement from the Fed is bizarre on multiple fronts. First, JPMorgan Chase had apparently decided on its own that it was free of any Fed restrictions on March 13 of this year when it announced that it “planned to open up to 90 branches in new markets” over 2019.

In October of last year, Michelle Davis reported for Bloomberg News that “In actions never before made public, Obama administration regulators prevented the bank from opening branches in new states as punishment for violating banking rules, according to people familiar with the matter. JPMorgan’s ambitious plan to expand nationally, announced earlier this year, was made possible by the Trump administration’s rollback of those restraints…”

The Fed’s announcement is even more bizarre considering that since its 2013 restrictions were placed on the bank, JPMorgan Chase has pleaded guilty to three criminal felony counts: two counts in 2014 for its role in the Bernie Madoff Ponzi scheme and one count in 2015 for its participation in the rigging of the foreign exchange market. According to the bank’s own 10-K filing with the SEC in February of this year, its probation period under its deferred settlement with the Justice Department in the foreign exchange trading felony matter does not end until January of 2020.

JPMorgan Chase is the only global bank headquartered in the United States to have pleaded guilty to three criminal felony counts. But what is more unprecedented in the history of banking in the U.S. is the fact that after the London Whale saga and after the Madoff-related felony counts in 2014 and the foreign exchange felony count in 2015, the same Chairman and CEO, Jamie Dimon, has been permitted by its Board and regulators to remain at the helm of the bank.

Not only is Dimon allowed to sit at the helm of the bank but he has the audacity to perpetually flaunt his bank’s “fortress balance sheet” while the bank simultaneously sits on $48 trillion in derivatives.

But the real lack of credibility in the Fed announcing that JPMorgan Chase has shown “evidence of substantial improvements” in its “risk-management program and internal audit functions” is the nature of the conduct that has garnered it fines in just the past year.

One of the most egregious things that happened in JPMorgan’s bank relationship with Bernie Madoff was that it failed to file the required suspicious activity reports with U.S. regulators but notified the U.K. authorities that it thought Madoff might be running a Ponzi scheme. JPMorgan Chase and its predecessor banks had maintained the business bank account for Madoff for decades. As part of its settlement with the Department of Justice, the bank promised to reform its Bank Secrecy Act/Anti-Money Laundering compliance programs and procedures.

But just this past December 28, JPMorgan Chase was charged by the Hong Kong Monetary Authority with – wait for it – anti-money laundering violations.

In the same month, JPMorgan Chase was fined $135 million by the Securities and Exchange Commission for improperly providing American Depository Receipts (ADRs) “to brokers in thousands of pre-release transactions when neither the broker nor its customers had the foreign shares needed to support those new ADRs.” The SEC said “Such practices resulted in inflating the total number of a foreign issuer’s tradeable securities, which resulted in abusive practices like inappropriate short selling and dividend arbitrage that should not have been occurring.”

Yesterday, the very day that the Fed made its announcement, the Swiss Competition Authority announced that it was fining JPMorgan Chase and other banks for anti-competitive behavior in the foreign exchange spot market.

And JPMorgan Chase reported in its February 2019 10-K filing with the SEC the following:

In other words, while JPMorgan Chase continues to be fined for serial crimes and while it is potentially exposed to new criminal investigations and charges by the U.S. Department of Justice, the Federal Reserve has concluded it has reformed itself.

Welcome to the alternative reality of Federal bank regulation.