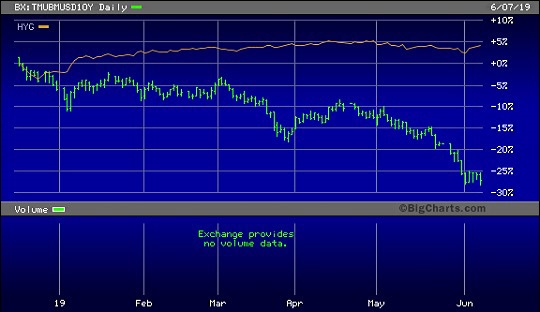 On Friday markets digested the nonfarm payrolls report from the U.S. Labor Department showing a weak job growth in May of just 75,000. That news adds to a myriad of other economic data, including a slowdown in durable goods orders, that suggest a deceleration of the U.S. economy.

The Atlanta Fed’s closely watched GDPNow indicator is showing a very weak 1.4 percent forecast for the second quarter of this year.

The 10-year U.S. Treasury note has duly noted the deceleration in the economy and has fallen from a yield of 2.9 percent since the middle of December to 2.08 percent at Friday’s close. The yield of the U.S. Treasury has an inverse relationship to its price. That is, as the market value of the Treasury note rises, the yield declines. Thus, as the perception grows that the U.S. economy is decelerating, the value of Treasuries rises from both investor money moving out of the stock market to safe havens as well as the perception that the Federal Reserve will cut interest rates, encouraging investors to buy Treasuries now to lock in yields before they drop further.

This is Market Think 101. What is not Market Think 101 is for high yield bonds (also known as junk bonds) to rally right along with U.S. Treasury notes. But that’s what’s been happening lately.

Junk bonds are those rated below Baa3 by Moody’s and below BBB- by Standard & Poor’s. Consider this analysis of the weird behavior of junk bonds last week by Dow Jones’ MarketWatch reporters Joy Wiltermuth and Sunny Oh:

“Corporate debt rated below investment-grade, or so-called junk bonds, have made significant gains this week on surging expectations that the Federal Reserve will cut interest rates to help give steam to an economy shadowed by the prospects for a global trade war. Against this tense backdrop, the weaker-than-expected jobs report could energize bets for easier Fed policy and help bonds from leveraged issuers retrace lost ground.”

That’s not the way a rational market should think. A rational market looks out about six months and trades on what it expects to be the situation at that time. If the U.S. economy does show significant weakness to warrant a Fed interest rate cut, or multiple cuts, that means the Fed will be facing Herculean challenges: it will have only nine ¼-point interest-rate cuts in its toolkit at a time when the U.S. has the greatest amount of debt in its history.

According to a May report from Standard and Poor’s, outstanding U.S. corporate debt rated by S&P Global Ratings grew 3 percent in 2018 to $9.3 trillion as of January 1, 2019. Of that amount, speculative-grade debt (junk bonds) represents $2.6 trillion.

The U.S. itself is deeply indebted with an unprecedented $22 trillion national debt outstanding. That means that the Federal government will have much less wiggle room to boost the economy through fiscal spending in the next downturn.

And then there is the Federal Reserve’s balance sheet which ballooned to more than $4.5 trillion during the financial crisis as it bought up overflowing debt instruments from Wall Street to prevent that debt from finding reluctant buyers at much higher interest rates — which would have very likely worsened the depth and duration of the downturn. The Fed’s balance sheet still sits at $4 trillion despite its so-called efforts of “normalization.” This means it also has far less wiggle room now than during the Great Recession that followed Wall Street’s implosion in 2008.

And then there is the liquidity problem inherent in junk bonds. The International Monetary Fund issued a report in 2015, noting the following:

The mega banks on Wall Street can certainly read the tea leaves. The stocks of JPMorgan Chase, Citigroup, Morgan Stanley and Bank of America all closed in the red on Friday. Goldman Sachs closed flat on the day.