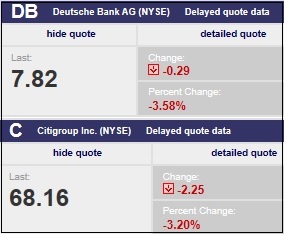 For years now, Wall Street On Parade has been pointing out to our readers that the Wall Street mega banks remain dangerously interconnected, despite the fact that those interconnections stopped banks from lending to one another in 2008; resulted in the largest government bailout of Wall Street in U.S. history; and ended up taking down the U.S. housing market and global economy.

Whenever there is a major selloff in the broader stock market, the Wall Street mega banks typically bleed far more than the major stock indices. Yesterday, however, something curious and potentially noteworthy happened. The Dow Jones Industrial Average lost 473.3 points or 1.79 percent and the following Wall Street banks traded in line with that decline: JPMorgan Chase actually lost a little less than the Dow with a decline of 1.63 percent. Bank of America and Goldman Sachs were in line with the broader market, registering declines of 1.81 and 1.84 percent, respectively. Morgan Stanley moved a little away from the herd with a loss of 2.10 percent.

But here’s where things got really interesting. Deutsche Bank, which has trouble coming from all directions (from money laundering investigations to Congressional subpoenas to curious loans to the President of the United States) lost 3.58 percent yesterday, leaving its share price just 20 pennies above its all time low. The stock closed at $7.82 – a decline of 93 percent from where its shares were trading in 2007. The bank’s proposed merger with Commerzbank fell through on April 25, leaving Deutsche Bank with ever dimming prospects.

The curious part is this: Citigroup traded yesterday like a clone of Deutsche Bank. Its shares lost 3.20 percent, far beyond the losses of its peers on Wall Street.

That’s a notable difference from how the Wall Street herd traded in 2016 versus Deutsche Bank. Here’s our report from September 27, 2016:

“Yesterday, Germany’s largest financial institution, Deutsche Bank, lost 7.06 percent by the close of trading on the New York Stock Exchange. That plunge in one of the most globally-interconnected banks dragged down the shares of every major Wall Street bank yesterday: Bank of America lost 2.77 percent; Morgan Stanley declined by 2.76 percent; Citigroup lost 2.67 percent; Goldman Sachs shed 2.21 percent; and JPMorgan Chase closed down 2.19 percent.”

The market knows from a 2016 report from the International Monetary Fund (IMF) that Deutsche Bank is heavily interconnected financially to JPMorgan Chase, Citigroup, Goldman Sachs, Morgan Stanley and Bank of America as well as other global banks in Europe. At least one of the major connecting links is derivatives. (See chart below from the IMF report.)

But why did Citigroup trade so far apart from its peers versus Deutsche Bank yesterday?  One thought is this. According to the December 31, 2018 report from the Office of the Comptroller of the Currency (OCC), Citibank N.A., the sprawling commercial bank of Citigroup, has $1.4 trillion in assets and has sold protection to other entities to the tune of $796.6 billion via Credit Default Swaps – the derivatives that tanked Wall Street in 2008.

Now the OCC notes that Citibank has also purchased $835.9 billion in Credit Default Swaps. But the problem is this: there is no clarity on what Citibank is selling protection on and what it is buying protection on. If it wagers wrong, as it famously did in 2007 and 2008, the U.S. could be dealing with its sinking hulk again.

Citibank is not alone in both buying and selling large amounts of Credit Default Swaps. JPMorgan Chase and Goldman Sachs also show large exposures in the most recent OCC data. But neither of those banks saw their shares trade at 99 cents during the 2008 financial collapse and neither received the $2.5 trillion in secret revolving loans from the Fed that Citi received during the crisis.

Another potential problem for Citibank is that according to its updated May 3, 2019 Federal call report, it holds $878.8 billion in deposits of which $318.7 billion, or 36 percent, are foreign deposits. Foreign money can stage a rapid exit in times of trouble. That’s because the Federal Deposit Insurance Corporation (FDIC) does not extend Federal insurance protection to foreign deposits — nor should it.

If Federal regulators once again allow these mega banks on Wall Street to crash the U.S. economy, there will be a political revolution in the United States. The Financial Crisis Inquiry Commission, which had a statutory mandate to study the 2008 crash, had this to say about regulators and Citigroup specifically:

“…we do not accept the view that regulators lacked the power to protect the financial system. They had ample power in many arenas and they chose not to use it. To give just three examples: the Securities and Exchange Commission could have required more capital and halted risky practices at the big investment banks. It did not. The Federal Reserve Bank of New York and other regulators could have clamped down on Citigroup’s excesses in the run-up to the crisis. They did not. Policy makers and regulators could have stopped the runaway mortgage securitization train. They did not. In case after case after case, regulators continued to rate the institutions they oversaw as safe and sound even in the face of mounting troubles, often downgrading them just before their collapse. And where regulators lacked authority, they could have sought it. Too often, they lacked the political will—in a political and ideological environment that constrained it—as well as the fortitude to critically challenge the institutions and the entire system they were entrusted to oversee.”

Systemic Risk Among Deutsche Bank and Global Systemically Important Banks (Source: IMF 2016 Report — “The blue, purple and green nodes denote European, US and Asian banks, respectively. The thickness of the arrows capture total linkages, both inward and outward, and the arrow captures the direction of net spillover. The size of the nodes reflects asset size.”)

After a $354 Billion U.S. Bailout, Germany’s Deutsche Bank Still Has $49 Trillion in Derivatives

Deutsche Bank: Here’s What Maxine Waters Should Be Subpoenaing