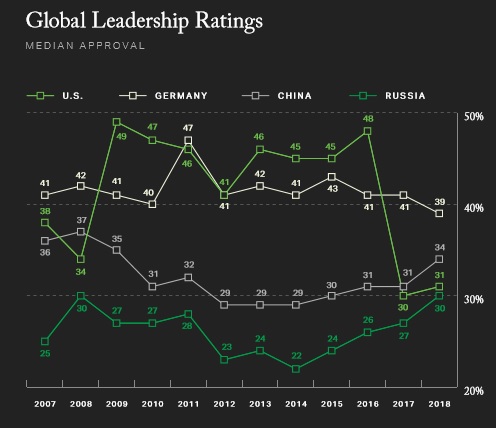 In what has to be the most diplomatic understatement of the year, Jon Clifton, the Global Managing Partner of the polling organization, Gallup, had this to say with the release of the company’s 2019 “Rating World Leaders” report: “The image of U.S. leadership abroad is not good right now.”

In reality, the U.S. had a 48 percent global approval rating in President Obama’s last year in office and that rating plunged to 30 percent in Trump’s first year in office. It now sits at 31 percent median approval across the 133 countries surveyed by Gallup.

One of the most dangerous takeaways from the new Gallup report is that our closest allies think so little of the U.S. right now. The report notes that “Regionally, the image of U.S. leadership fared worst in Europe, where approval remained low and stable, dropping one percentage point from the previous year to 24%.” The current 24 percent approval rating compares to a 44 percent approval rating in Europe in Obama’s last year in office.

The 24 percent overall approval rating in Europe disguises the deep distrust of the U.S. by some European countries where approval of the U.S. is far lower: Norway 12 percent; Sweden 13 percent; Austria and Portugal 14 percent; Belgium and Switzerland 16 percent; and Germany 17 percent.

Equally disturbing, the disapproval of the U.S. by Europeans, at 59 percent, puts the U.S. in the same league as Russia, which also received a 59 percent disapproval from Europeans in the current Gallup report.

Obviously, the U.S. pulling out of the Paris Climate Accord and the Iran nuclear deal, together with Trump’s insults toward European leaders and his trade battles have played a significant role in the plunging approval ratings of the United States in Europe.

The Gallup report concludes that “the main challengers to U.S. influence, values and wealth — China and Russia” have gained ground in approval ratings while the U.S. has declined. The report notes further that “…it may prove even more difficult for the U.S. to counter this influence and remain relevant in the second half of Trump’s presidency, unless the administration can erase some of the doubts that U.S. partners and allies have about its commitment.”

Just four months into Trump’s presidency, Der Spiegel, one of the most influential and widely read news magazines in Europe, published a breathtaking assessment of Trump. Written by its Executive Editor, Klaus Brinkbäumer, the editorial sent a chilling message across Europe:

That editorial ran on May 19, 2017. Just days later, the Chancellor of Germany, Angela Merkel, reinforced the growing isolation of America in a speech with the comment that after spending a few days with President Trump, Europe “really must take our fate into our own hands.”

The new Gallup report takes comfort in the fact that while global approval ratings of the U.S. plunged in Trump’s first year, they have stabilized for the most part around those low levels – the lowest in the past three U.S. presidential  administrations. That assessment is, in itself, an epiphany. We now expect so little of our country that an abysmal world view of us is seen as comforting because the ratings have stopped plunging further.

Is this really the country that we want to leave to our children and grandchildren?