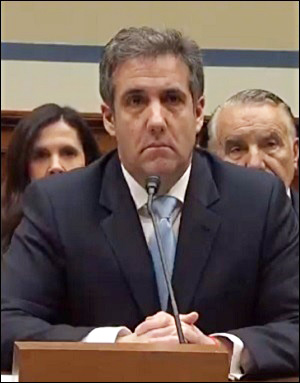 Today will mark a new milestone in the nightmarish hostage-taking of the United States of America, from which there is no readily apparent means of escape, by a daily non-reality TV show known as the Donald Trump Presidency. Today’s episode began at 10 a.m. in the U.S. House of Representatives’ Oversight and Reform Committee and stars the President’s former confidante, lawyer and “fixer” Michael Cohen calling the sitting President of the United States and leader of the free world a “conman,” “a cheat,” and “a liar.” Cohen also compares Trump to an organized crime boss in his opening statement, saying that “Mr. Trump called me a ‘rat’ for choosing to tell the truth – much like a mobster would do when one of his men decides to cooperate with the government.”

That’s a very telling point. Mr. Trump is the highest official in the U.S. government. He represents the government on behalf of the American people. But in the President’s mind, loyalty to him supersedes a citizen’s obligation to cooperate with the government on matters of truth, fact and potential criminal activity. Could there be a more dangerous mindset for the occupant of the Oval Office?

In his opening remarks, Cohen explains the now obvious to the Committee: Trump  “ran for office to make his brand great, not to make our country great. He had no desire or intention to lead this nation – only to market himself and to build his wealth and power.” Cohen adds: “Mr. Trump would often say, this campaign was going to be the ‘greatest infomercial in political history.’ ”

In fact, Trump’s brand has suffered almost as much as the people of America and the country’s reputation. This non-reality TV show effectively has no winners – other than the super rich getting the bonanza of a big tax break.

In a memorandum dated January 20, 2019, the Chair of the Committee, Elijah Cummings, explained to Committee members what will be the scope of today’s hearing, which is expected to last most of the day. Cummings outlined the following areas where Committee members will be able to ask questions without interfering with ongoing investigations:

Before the hearing could get off the ground, Republicans attempted to stop the proceedings by arguing that they hadn’t received a copy of Cohen’s testimony 24 hours before the hearing. That argument seemed specious, at best, and outright obstruction at worst, since multiple media outlets published the testimony last evening. Republicans called for a vote on their motion to halt the hearing and lost.

Cohen has pleaded guilty to multiple crimes related to his work for Trump, including campaign finance violations and lying to Congress. On December 12, 2018, he was sentenced to three years in prison and is scheduled to report for his sentence on May 6.