Policing Wall Street: Is Maxine Waters Up to the Task? 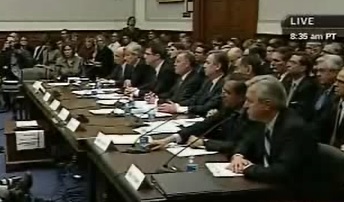 The new chair of the House Financial Services Committee, Maxine Waters of California, has held elected office for more than four decades. She has served in the U.S. House of Representatives since 1991. Prior to that, she served 14 years in the California State Assembly. She has been on the House Financial Services Committee for the past 28 years – a period in which she has witnessed the largest Wall Street banks dramatically expand their financial frauds against the public.

But can even a knowledgeable, seasoned veteran like Waters tackle the herculean problem that Wall Street banks represent to the country today?

Apparently, JPMorgan Chase CEO Jamie Dimon and Goldman Sachs CEO David Solomon aren’t wasting any time trying to get a handle on the topics on which Waters intends to hold hearings. According to a report by CNBC in late January, both CEOs met separately with Waters after she became Committee Chair. The Wall Street Journal has further reported that Waters plans to call the CEOs of the six largest Wall Street banks to testify at a hearing in March or April. That would likely include: JPMorgan Chase, Bank of America, Citigroup, Morgan Stanley, Goldman Sachs and Wells Fargo.

The 2019 hearing would be the first time since February 11, 2009, at the height of the financial crisis, that all of the major Wall Street bank CEOs were grilled by this Committee. On that date, the topic was how the banks had used the hundreds of billions of dollars in taxpayer bailout money. Waters had this to say at the time:

Waters: Thank you very much, Mr. Chairman. This is an important hearing today. The question has been asked over and over again, what did the banks do with the taxpayer’s money? The taxpayers of America are very, very upset about the fact that they allowed the banks to borrow their money, the taxpayer’s money, in unprecedented amounts, billions of dollars. And when the taxpayers went back to the banks to say, may I have a loan, may I have a loan to buy a car, may I have a loan to pay my student fees, may I have a loan for a mortgage, the banks are saying, no. And to add insult to injury, the banks have sent out notices to credit card holders, taxpayers again who have loaned money to the big banks, the banks are saying to the credit card holders, oh, we’re going to increase your interest rates. We know that you were paying 13, 14, 15 percent already, but now it’s going to cost you 18, 19, 20 percent. So the taxpayers have lent their money to the big banks, who are supposed to be big-business persons, expertise in business management, who are failing, they’ve gone back to ask for some assistance, they’re being denied…”

At the time of the February 11, 2009 House hearing, the American people were only aware of the Troubled Asset Relief Program (TARP) bailout of the banks, the $700 billion fund that was approved by the U.S. Congress. The public would not learn until two years later – following a court battle and an amendment tacked on by Senator Bernie Sanders to the Dodd-Frank financial reform legislation – that the Federal Reserve had been secretly lending a cumulative $16.1 trillion in almost zero interest rate loans to the banks to prop them up. And, as Waters pointed out in her testimony, instead of passing along those low interest rates to their customers, in the midst of the worst economic crisis since the Great Depression, the banks hiked some credit card loans to 18, 19, and 20 percent – driving people into bankruptcy and foreclosure on their homes.

Senator Bernie Sanders called the Federal Reserve’s $16.1 trillion secret funding program “socialism for the rich, and rugged you’re-on-your-own individualism for everyone else.”

A decade after the greatest financial system and economic collapse since the Great Depression, Congress is still tolerating captured regulators at Wall Street’s top cops: the Federal Reserve, the Securities and Exchange Commission (SEC), the Office of the Comptroller of the Currency (OCC) and the Consumer Financial Protection Bureau (CFPB).

The SEC has taken no action to stop the Wall Street banks’ from trading the shares of their own bank stocks in their own Dark Pools as well as hundreds of other stocks that should have trading transparency on a regulated stock exchange. The OCC and Federal Reserve are now allowing JPMorgan Chase to open more bank branches nationwide despite the fact that it has pleaded guilty in the past four years to three criminal felony charges – two for its role in the Bernie Madoff Ponzi scheme and one for its involvement in the rigging of the foreign currency market. (JPMorgan’s Chairman and CEO, Jamie Dimon, who presided over the bank during its $30 billion in fines and three felony charges remains at the helm of the bank. No regulator has blinked an eye about the message that sends to the investing public.)

The Consumer Financial Protection Bureau has been essentially gutted under the Trump administration. The CFPB’s effort to restore the rights of consumers to take their complaints against the Wall Street banks to the nation’s courts was terminated by Vice President Mike Pence, who cast the deciding vote in the Senate in 2017.

Let that sink in for a moment, the most corrupt industry in America, Wall Street, which has crashed the U.S. financial system and brought financial devastation to millions of Americans twice in the past 9 decades, is still allowed by Congress to run its own private justice system, forcing both customers and employees into mandatory arbitration hearings which lack any of the protections of our nation’s court system. The jury pool, rather than randomly selected from voter registration records or driver license rosters, is instead picked from a list of repeat arbitrators with heavy ties to the financial services industry. Case law and legal precedent are typically ignored in these hearings and reasoned, detailed decisions are never provided by the arbitrators, making an appeal to a court of law almost impossible.

Waters clearly has her work cut out for her but every American should be rooting for the Congresswoman to succeed. If Waters fails to bring critically needed public attention to the new dangers lurking in the dark corners of the behemoth Wall Street banks, the U.S. could soon be looking at a financial crisis that makes 2008 look like a cakewalk.