Kavanaugh’s Fox News Interview: Dark Money Transforms Him into a High School Virgin Who Went to Church Every Sunday 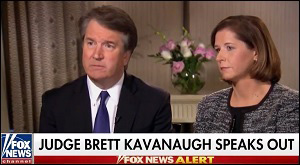 Last evening we got a sneak peek at what all of that coaching of Supreme Court nominee Brett Kavanaugh at the White House over the past two months has done for his demeanor under fire. He’s now effectively been turned into a cross between Fred Rogers, the beloved host of the children’s show Mister Rogers’ Neighborhood and Ward Cleaver, the wholesome dad in the 1950s sitcom, Leave It To Beaver.

In an interview last evening with Fox News host Martha MacCallum, Kavanaugh sat next to his wife Ashley and did everything just short of singing the refrain “look at me I’m Sandra Dee, lousy with virginity.” Kavanaugh told MacCallum that he was a virgin throughout his high school years and “many years after.” What he focused on at his elite private high school known as Georgetown Preparatory in North Bethesda, Maryland was  “academics and athletics” and “going to church every Sunday at Little Flower,” Kavanaugh said on the news program.

But when MacCallum directed a question to Ashley Kavanaugh about whether there should be an FBI investigation, Brett Kavanaugh jumped in and answered the question instead and avoided a direct response. (Read the full transcript here.) Lying to the FBI frequently results in criminal charges and jail time.

The Kavanaugh self-portrait on Fox News stands in stark contrast to how Kavanaugh describes his high school days on his yearbook page and how his close friend and former classmate, Mark Judge, has described the high school experience in two books he authored – one titled Wasted: Tales of a Gen-X Drunk. The humble, respectful-of-women profile Kavanaugh carefully crafted last evening also stands in sharp disagreement with the sexual assault allegations against him that have surfaced from at least three women.

Given this study in contradictory personas, it’s relevant to note that Kavanaugh has serious dark money backing his nomination and has undergone an extraordinary amount of coaching at the White House since he was first nominated in early July. That coaching has become even more intense as the sexual assault allegations surfaced.

According to an August 30 report in Politico, two of the very Senators who sit on the Senate Judiciary Committee who will vote on whether to move Kavanaugh’s Supreme Court nomination forward, Lindsey Graham and Orrin Hatch, actually participated in the White House coaching sessions with Kavanaugh. Politico reports:

“Republican Sens. Lindsey Graham of South Carolina, Rob Portman of Ohio and Dan Sullivan of Alaska have all helped Kavanaugh practice and critique his performance, according to people familiar with the sessions. Another source said that Sen. Orrin Hatch of Utah — a former Judiciary Committee chairman — played the role of chairman in a mock hearing, which included GOP senators standing in for Judiciary members and zeroing in on topics that Democrats are expected to grill Kavanaugh about.”

That serious conflict of interest would explain news reports that the all-male Republican members of the Senate Judiciary Committee were planning to bring in a female sex crimes prosecutor to do their questioning of Dr. Christine Blasey Ford, one of the female accusers of Kavanaugh, at a hearing scheduled for this Thursday. Ford’s lawyer has now written to Senate Judiciary Chairman, Chuck Grassley, to oppose that decision.

According to White House reporter Josh Dawsey of the Washington Post, one of the people participating in coaching sessions with Kavanaugh since the sexual allegations surfaced is White House Deputy Chief of Staff for Communications, Bill Shine. He is the disgraced former Fox News executive whom Fox women have alleged in court documents ignored and/or covered up the sexual harassment of women by his boss, Roger Ailes.

In a Tweet posted by Dawsey on September 18, he reports:

“In a prep session for next week, Kavanaugh was grilled today in the Eisenhower Executive Office Building about his past, dating, the accuser’s account and more for about two hours. Inquisitors included Donald McGahn, Bill Shine, Sarah Sanders, Raj Shah & more.”

Donald McGahn is White House Counsel who has presided over pushing through the Kavanaugh nomination. McGahn has dutifully sat behind Kavanaugh in the confirmation hearings. He is one of the 12 lawyers who, in one fell swoop, packed themselves up from the big corporate law firm, Jones Day, and headed to the Trump administration on Trump’s very first day in office, January 20, 2017. Jones Day is the long-tenured outside law firm to Koch Industries, a fossil fuels conglomerate that has funded climate-change denial front groups for decades and sought to weaken Federal environmental regulations.

One of the more recent Koch Industries’ front groups is Freedom Partners. According to Public Citizen, two of the Trump administration’s key hires from Jones Day, McGahn and Ann Donaldson, Chief of Staff to McGahn, both previously represented Freedom Partners.

All but one of Freedom Partners’ 9-member Board of Directors is a current or former Koch company employee. The Board Chair is the same Mark Holden that is the General Counsel of Koch Industries.

We don’t have to wonder about what Koch Industries and Freedom Partners wanted to get from the Trump administration. They made that patently clear when Freedom Partners’ President, Marc Short, was named by Trump as his Director of Legislative Affairs on January 4, 2017. (Short stepped down from that post this past July.) Concurrent with Short’s appointment, Freedom Partners issued a formal memo demanding that Trump roll back a long list of Federal regulations, particularly those involving greenhouse gas emissions and climate change. Regarding the Paris Climate Accord, the memo states: “The agreement was neither submitted nor ratified as a treaty in the U.S. Senate. President Trump can submit the agreement as a treaty for ratification in the U.S. Senate where it will fail or he can withdraw the U.S. from participation.” Trump withdrew the U.S. from participation in the Paris Climate Accord after less than six months in office. The decision was assailed by U.S. allies around the world.

On the exact same day that President Donald Trump nominated Kavanaugh to the Supreme Court, another front group that has been heavily funded with Koch money, Americans for Prosperity, released this statement:

“Americans for Prosperity will commit seven figures to paid advertising and grassroots engagement in support of Judge Kavanaugh’s confirmation. Door and phone scripts have already been deployed to each of the 36 AFP state chapters, and a first round of mail and door hangers will be deployed in the coming weeks in West Virginia, North Dakota, Indiana, Florida, Missouri, Pennsylvania, Montana, Ohio, Michigan, and Wisconsin.  Later this month, AFP will host events, tele-townhalls, and Facebook Live conversations with key lawmakers about the proper role of courts, and the importance of confirming judges who interpret the law as written.”

Kavanaugh has been a judge on the U.S. Court of Appeals for the District of Columbia for the past 12 years. During that time, he has repeatedly issued decisions that benefit fossil fuel interests like those of Koch Industries.

If you’re trying to understand the heavy-handed push to rush Kavanaugh through the confirmation process, kill any further FBI investigations into his background, and deny background witnesses to appear at the same hearing as his accusers, look no further than the money trail that has gotten Kavanaugh this far.