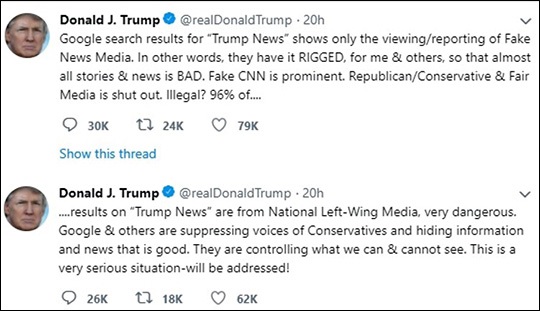 Yesterday, President Donald Trump accused Google in a Tweet of rigging its search results to suppress the “voices of Conservatives.” That’s the same complaint that the secretive Charles Koch network of super wealthy political operatives have been attempting to address with media front groups for more than a decade. Trump now appears to be using his bully pulpit in an effort to legitimize those Koch-funded media outlets.

The billionaire fossil fuels magnate, Charles Koch, has a lot of balls in the air right now and some are at risk of falling to earth with a thud. He’s currently in a battle to beat out the National Republican Committee (RNC) as the go-to guy for voter database, data mining and targeted social media ads in the midterms and all future elections. (See our report: Koch Industries Is Staffing Up with Voter Data Scientists to Tip the November Election to the Extreme Right.) That effort had some air knocked out of it earlier this month when Politico reported that RNC Chair, Ronna McDaniel, sent out a memo warning Republicans to steer clear of the Koch operation out of fear that it might “weaponize that data against Republicans if their business interests conflicted with electing Republicans….”

Charles Koch also has a problem with mainstream media’s repulsion of the Donald Trump administration, in which the Koch network has installed more than four dozen people who formerly worked for it. Charles Koch is the CEO of Koch Industries and it’s in the midst of an expensive media re-branding campaign to make itself appear wholesome instead of a Machiavellian mastermind of creating four decades of front groups working to deny climate change, gut Federal regulations and create a kleptocracy in the U.S. Unfortunately, Trump’s immigration policy, which produced TV images of infants in detention cages and Trump’s labeling prominent black women as “low IQ” or “a dog” on his Twitter page meant that Charles Koch had to attempt to distance himself from Trump while still keeping his troops in pivotal spots in the Trump administration.

We reported on the Koch network’s “media” front groups all the way back in 2010, writing as follows:

“Americans for Prosperity now has chapters in 30 states, including those with the largest number of voters. As part of the focus on state level efforts, key right wing foundations are funding another nonprofit, the State Policy Network, which says it has free market think tanks in every state. The work of most of the groups is to push for privatization of public services and public schools. The State Policy Network is fueling a new, rapidly growing  movement: right wing funded groups posing as independent investigative media outlets. So far, there is West Virginia Watchdog, Old Dominion Watchdog in Virginia, Texas Watchdog, Illinois Statehouse News, Missouri News Horizon, Capital Report New Mexico, Idaho Reporter, the Commonwealth Foundation’s Pennsylvania Independent, TNReport of Tennessee, the Pelican Institute’s Capital Reporter in Louisiana, Pacific Research Institute’s Cal Watch Dog in California, Idaho Freedom Foundation’s Idaho Reporter, the Cowboy State Free Press in Wyoming, and others in various stages of getting up and running.

“The State Policy Network publishes strategic planning articles on how these newly anointed investigative reporters can network with each other and get stories they pen to dominate the internet and be picked up by mainstream media.”

That was 2010. In April 2016, Jeff Nesbit, writing for Salon, expanded the understanding of the Koch operation in an article headlined: Inside the right-wing lie factory: Secrets of a Koch-funded propaganda machine more insidious than Fox News. Nesbit’s report focused on the Franklin Center for Government and Public Integrity, a nonprofit that “provides a significant amount of political news coverage in 39 state capitols through 55 interconnected news sites…” SourceWatch reports that the Koch-network affiliated Donors Trust and Donors Capital Fund provided over $29 million to the Franklin Center between 2010 and 2014.

Nesbit indicates that news generated by the Franklin Center is able to make the national news circuit by being  “consistently” regurgitated by Fox News, the Washington Examiner, The Daily Caller and the Drudge report. Nesbit explained the financial success of the Franklin Center as follows:

“Its success—basically, the reason that it has no need to fight for its survival when every other local digital journalism effort does—is almost certainly due to its connection to the Koch donor network. Like other related groups with operations in the DC area, the Franklin Center benefits greatly from the Koch donor network’s Freedom Partners.

As Nesbit indicates, the so-called Koch network has been structured into a tax-exempt organization called Freedom Partners. We reported last month that those expensive semi-annual political strategy sessions by the Koch network, held at expensive tony resorts, are now being paid out of the coffers of Freedom Partners.

Besides Koch money, who else has been involved in funding the Koch network? The corporate tycoons of yesteryear have passed the baton to their heirs to continue the battle against government regulation of big business – no matter how harmful that agenda is to the environment, human health, income equality, and democracy. The money funding some of the largest pro-corporate agenda foundations comes from consumer brands like Coors, Vicks, Borden, F.W. Woolworth, and Amway. Koch Industries brands include Brawny paper towels; Dixie paper cups and related products; Angel Soft and Quilted Northern toilet paper; Mardi Gras napkins; Vanity Fair napkins, tissues and household paper products; Sparkle paper towels; and the Stainmaster line of home cleaning products.

Despite the talk of a tiff between Charles Koch and Donald Trump, the Koch tentacles are firmly entrenched in the Trump administration. Public Citizen reported in November that 44 Koch allies are staffing the White House and other agencies. And as we have reported at Wall Street On Parade, that’s in addition to the 12 lawyers from Jones Day, Koch Industries’ long-time outside law firm, who all took their seats in the Trump administration on January 20, 2017 – the very day Trump was sworn into office. That includes White House Counsel Don McGahn and his Chief of Staff, Ann Donaldson. 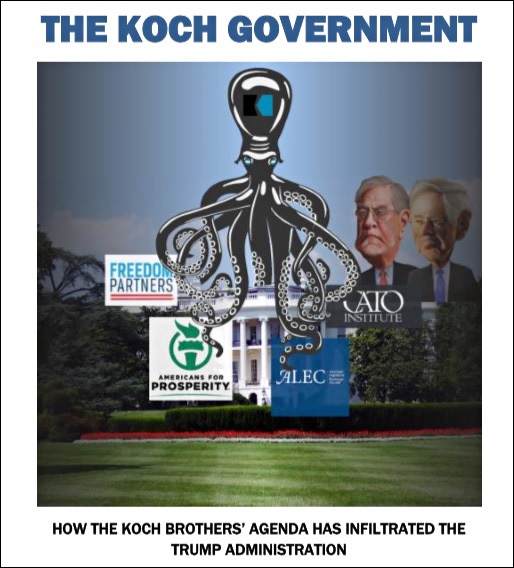