Evidence Mounts that President Trump May Have a Serious Personality Disorder 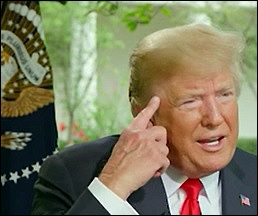 The media’s focus on President Donald Trump currently revolves around whether he is or is not an unindicted co-conspirator in criminal campaign finance fraud following that implication by prosecution documents and his former lawyer, Michael Cohen, in Federal court testimony on Tuesday. Democrats want congressional hearings to gather more evidence while Republican leaders are simply ducking press interviews.

The graver risk to the country, however, may stem not from whether Donald Trump is a crook but whether he is suffering from narcissistic personality disorder, a condition with the potential to elevate to dangerous psychotic behavior.

Last year, 27 psychiatrists and mental health experts assessed Donald Trump’s behavior in the book The Dangerous Case of Donald Trump.  One of the most revealing articles came from Dr. Craig Malkin, Ph.D., a clinical psychologist, lecturer for Harvard Medical School, and author of the internationally acclaimed Rethinking Narcissism.

Dr. Malkin explains that narcissistic personalities are common and not necessarily bad in a president. He writes “When does the double-edged sword of narcissism – Trump’s or any other president’s – turn dangerous?” He says it’s based “on whether or not their narcissism is high enough to count as an illness.”

Pathological narcissism according to Malkin “begins when people become so addicted to feeling special that, just like with any drug, they’ll do anything to get their ‘high,’ including lie, steal, cheat, betray, and even hurt those closest to them.” Malkin says this starts around 9 on the narcissism spectrum and gets worse around 10. “At these points,” writes Malkin, “you’re in the realm of narcissistic personality disorder (NPD).”

Psychology Today, citing the American Psychiatric Association’s Diagnostic and Statistical Manual of Mental Disorders, writes that narcissistic personality disorder is “indicated by five or more of the following symptoms”:

That’s a total of nine symptoms with only five needing to be present to qualify an individual for NPD. Yesterday, Fox and Friends released Ainsley Earhardt’s interview with President Donald Trump at the White House. Each and every one of the nine symptoms listed above were on dramatic display.

The President’s belief in how uniquely special he is, his exaggerated view of his importance to the country, his fantasy of his success, and his arrogance, went like this in the Fox interview: “If I ever got impeached, the market would crash; I think everybody would be very poor; because without this thinking [he points to his brain] you would see numbers that you wouldn’t believe.”

When asked how he would grade himself as a President, Trump said: “I would say I would honestly give myself an A-plus and so would many other people.” Trump also volunteered that “We have the best economy we’ve ever had in the history of our country,” a remarkably untrue statement on almost any measure (like wages, income and wealth equality, GDP growth, labor participation rate, etc.)

As for the President’s willingness to take advantage of others to reach his own goals (like throwing red meat to his base) and lacking empathy, Trump said this about his immigration policy: “The immigration laws are horrible. We’re doing an incredible job.”

On June 26, Federal District Judge Dana Sabraw had a different opinion of the job Trump is doing with immigration. Judge Sabraw wrote the following in his court decision released on that date:

“Eleven weeks ago, Plaintiffs leveled the serious accusation that our Government was engaged in a widespread practice of separating migrant families, and placing minor children who were separated from their parents in government facilities for ‘unaccompanied minors.’  According to Plaintiffs, the practice was applied indiscriminately, and separated even those families with small children and infants—many of whom were seeking asylum.  Plaintiffs noted reports that the practice would become national policy. Recent events confirm these allegations. Extraordinary relief is requested, and is warranted under the circumstances.”

The Judge wrote further that children were being “orphaned” as a result of Trump’s policy and that the situation had reached a “crisis level” with “tent cities and other makeshift facilities” springing up. Judge Sabraw ordered the Trump administration to reunite the separated children with their parents.

As for the President having unreasonable expectations of favorable treatment, Trump blasted Jeff Sessions in the Fox interview, the man Trump himself appointed as U.S. Attorney General. Trump’s complaint centered on the fact that Sessions had recused himself from the probe into Russian involvement in the Trump campaign, which allowed the appointment of Special Counsel Robert Mueller, who has aggressively gone after indictments for criminal activity. Sessions effectively had no choice but to recuse since he had failed to tell Congress about meetings he had with Russian diplomats. Trump has Tweeted numerous times about Sessions, suggesting that he believes the U.S. Attorney General’s job is to protect the President rather than the country.

Dr. Malkin writes in the book, The Dangerous Case of Donald Trump, that “The greatest danger, as we saw with Nixon, is that pathological narcissists can lose touch with reality in subtle ways that become extremely dangerous over time. When they can’t let go of their need to be admired or recognized, they have to bend or invent a reality in which they remain special despite all messages to the contrary. In point of fact, they become dangerously psychotic.”

“As pathological narcissists become increasingly thought-disordered, their vision becomes clouded. That’s because if you see the world not as it is, but as you wish or need it to be in order to preserve the belief you’re special, you lose touch with crucial information, brute facts, and harsh realities. On a global scale that means, as it did with Nixon, that if it feeds your ego, step up military action. The precariousness of the world or careful assessments of the dangers of a military assault don’t matter at this point; displays of power and superiority are soothing when pathological narcissists feel like they’re falling apart inside.”

It should be recalled that until his recent cancellation announcement, the President was planning an unprecedented, large scale military parade through the streets of Washington, D.C. – no doubt with a big viewing stand where the troops would be saluting the President and feeding his ego.

Republicans presently control all three branches of government. No hearings or censures can happen without their lead. Republican leaders must stop ducking reporters and hiding their heads in the sand as the President’s behavior becomes ever more erratic.