The Dodd-Frank financial reform legislation was signed into law on July 21, 2010 as the U.S. was still reeling from the aftermath of the epic 2008 Wall Street crash and economic meltdown. In addition to giving the Federal Reserve enhanced powers to supervise the behemoth bank holding companies on Wall Street, Section 1108 created a new position on the Board of Governors of the Federal Reserve. The legislation reads: “The Vice Chairman for Supervision shall develop policy recommendations for the Board regarding supervision and regulation of depository institution holding companies and other financial firms supervised by the Board, and shall oversee the supervision and regulation of such firms.’’

The President of the United States was mandated to fill this slot and the Fed’s Vice Chairman for Supervision was to give semi-annual testimony to the Senate Banking and House Finance Committees. Under the presidency of Barack Obama, the post was never formally filled, likely because Wall Street did not want it to happen.

President Donald Trump nominated Randal Quarles to the post in July of last year and the Senate confirmed the nomination on October 5. Quarles was sworn in on October 13. For the decade prior, Quarles was engaged in investment firms – the Cynosure Group and prior to that the Carlyle Group. Quarles had previously spent 15 years at the large Wall Street law firm, Davis Polk & Wardwell, where he traveled through the revolving door multiple times to the U.S. Treasury Department. According to Bloomberg’s bio of Quarles, while at Davis Polk he was “the co-head of the firm’s Financial Institutions Group and advised on transactions that included a number of the largest financial sector mergers ever completed.” In other words, Quarles ties to Wall Street are extensive.

During Quarles’ confirmation hearing before the Senate Banking Committee in July of last year, Senator Sherrod Brown had this to say about Quarles:

“As Treasury’s Undersecretary for Domestic Finance in the years leading up to the 2008 financial crisis, his job was to coordinate oversight of the financial industry and ensure government watch dogs were looking out for the best interests of American taxpayers. However, many of his statements leading up to the crisis lead me to wonder whether he was asleep at the switch or willfully turning a blind eye to Wall Street abuses and excesses. Contrary to the predictions in 2006, the economy was not ‘strong.’ The financial sector was not ‘healthy’ and our future was not, as he said, ‘bright.’ The banks were not well capitalized and taxpayers paid billions to bail the banks out. Mr. Quarles and his company turned a profit off of the crisis.”

During Quarles semi-annual testimony to Congress on April 17 of this year, he gave more of that rosy spin to how Wall Street is functioning today. Quarles stated:

“Overall, the U.S. commercial banking system has strengthened considerably over the past decade. The largest U.S. banking organizations — those the failure of which would pose the greatest risk to the financial system and that are subject to the Federal Reserve’s stress testing framework — have increased the dollar amount of their loss-absorbing common equity capital by more than $700 billion since 2009….”

Here’s the problem. The Wall Street mega banks may have increased their common equity capital by more than $700 billion but the five largest Wall Street bank holding companies are still holding $242.1 trillion in notional (face amount) of derivatives as of March 31, 2018 according to the Office of the Comptroller of the Currency (OCC). (See graph below.)

Despite the fact that these obscene levels of derivatives, concentrated among a handful of  counterparties, played an outsized role in the collapse of Wall Street in 2008, the OCC and the Federal Reserve still have their blinders firmly in place today. This was true during the Obama administration and the situation has become even more dangerous today as the Trump administration is gutting already inadequate safeguards. 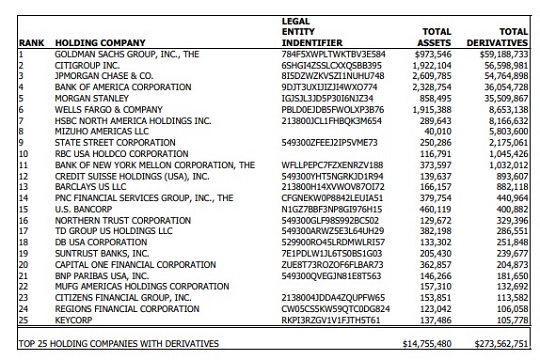 Notional Amounts of Derivative Contracts at Bank Holding Companies (Top 25) as of March 31, 2018 (Source: Office of the Comptroller of the Currency) Figures in Millions of Dollars.