Amnesty International Unfurls a Banner on the Vauxhall Bridge over the Thames in London to Protest Trump’s Visit (July 13, 2018)

Hundreds of thousands of protesters marched against President Donald Trump’s inhumane immigration policies on Saturday, June 30, in the United States and now hundreds of thousands more are marching today and tomorrow in London and cities throughout Britain as Trump meets with Prime Minister Theresa May and is scheduled to have tea with the Queen.

The sweeping public outrage has, unfortunately, escaped the tone-deaf Republican controlled Congress of the United States. Republican majority leaders have scheduled two hearings since June 28 to bolster Trump’s base and berate the FBI over the investigation of Hillary Clinton’s emails in 2016 and, yesterday, to flog the FBI for bias against Trump.

What the Republican majority leaders in Congress see no urgency to investigate or hold hearings on is how the Trump administration has effectively abducted 3,000 children as young as two months old from their immigrant parents at the U.S. southern border, shipped them to detention centers all over the country, while never bothering to create a tracking system to determine which children belong to which parents. A U.S. Federal judge, Dana Sabraw, has ordered the children reunited with their parents and wrote a scathing decision noting that the “startling” and “unfortunate reality is that under the present system migrant children are not accounted for with the same efficiency and accuracy as property.”

Today Amnesty International unfurled a banner on the Vauxhall Bridge over the Thames in London reading “Human Rights Nightmare” and featuring a picture of Donald Trump. One of the largest signs in the crowd of protesters around Parliament Square in London read: “No! In the name of humanity, we refuse to accept a fascist America.” Other signs blared: “No to Racism; No to Trump” and “Walk-Out Against Trump.” A popular chant that rang out from the crowd was: “Say it loud, say it clear, Donald Trump’s Not Welcome Here.” Many of the protesters who spoke to the media used the phrase that is being used by U.S. protesters, citing Trump for “caging children” in the immigrant detention centers at the U.S. southern border.

Magid Magid, the Mayor of Sheffield, Britain’s fourth largest city, has banned Trump from entering the city and declared July 13 to be “Mexico Solidarity Day.” (Most of the immigrant children that were recently separated from their parents are from Central America. Trump has, however, previously disparaged Mexican immigrants as “rapists.”)

“I think that this march in particular deals with a lot of the issues that we talk about in Stormy’s case, and I think it deals significantly with the issues that I’m dealing with day in and day out, as it relates to some of these mothers who have been separated from their children from the southern border of the United States…The bottom line is these families need to be reunited yesterday.”

Also receiving wide media attention is a 20-foot inflatable blimp at the London protests which depicts Trump as a baby in a diaper holding a cellphone. Matthew Butcher, one of the organizers behind the blimp, told the Hollywood Reporter that there is now a “Trump Baby World Tour” in the works as a result of “having people all over the world basically requesting, ‘Please, please can we have him.’ ”

The U.K.’s Daily Mirror newspaper memorialized Trump’s visit with a front page that pronounced in bold red caps that “The Ego Has Landed” and a smaller headline noting that Trump claims Brits “ ‘like me a lot’ as tens of thousands set to protest against visit.” 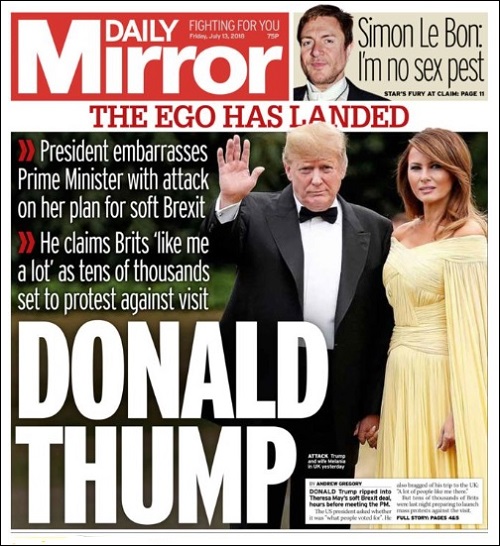