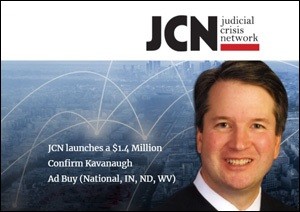 Just days before President Trump announced his Supreme Court nominee Brett Kavanaugh on Monday evening, a dark money group called the Judicial Crisis Network (JCN) was airing a television ad calling some of the most trusted  Democrats “extremists.” As photos of Senators Elizabeth Warren, Bernie Sanders and Jeff Merkley flashed across the screen (along with other well known Democrats) a voice warned that these “extremists will lie and attack the nominee.”

One thing this threesome actually stands out for is telling the hard truths to the American people. During his presidential bid in 2016, Sanders traveled around the country telling tens of thousands of people at his rallies that the “business model of Wall Street is fraud.” Warren exposed the $6 trillion in a backdoor bailout that the Federal Reserve had funneled secretly to Citigroup, Morgan Stanley and Merrill Lynch during the financial crash. Merkley brought the nation’s attention recently to the child abuse taking place under the Trump administration by visiting one of the immigration detention centers holding children, being refused entry, and going on national television to call out the abuse of ripping children from their parents and sending them off to unknown locations all over the country.

JCN was also behind the TV ads demanding that President Obama not be allowed to select a replacement for Supreme Court Justice Antonin Scalia after his death. The group spent $7 million to block Obama’s nominee, Merrick Garland, from getting a confirmation hearing. This allowed President Trump to select Neil Gorsuch to fill Scalia’s seat less than two weeks after Trump took office.

So who is behind this dark money group labeling hardworking public servants “extremists”? According to the Center for Responsive Politics, “JCN’s tightest ties with any group or individual revolve around Ann and Neil Corkery.”

In November of last year the Center for Responsive Politics reported that “Newly obtained tax documents show that JCN’s money came almost entirely from yet another secretive nonprofit, the Wellspring Committee, which flooded JCN with nearly $23.5 million in 2016. Most of Wellspring’s funds, in turn, came from a single mysterious donor who gave the organization almost $28.5 million — nearly 90 percent of its $32.2 million in revenues.”

A person able to toss down a $28.5 million donation is highly likely a billionaire and Americans should be able to find out what the agenda is of someone trying to stack the Supreme Court with corporate-friendly justices.

Neil Corkery is listed as Wellspring’s President for 2016 with a meager salary of $30,000 for 10 hours work per week. That compares to the $120,000 Ann Corkery was salaried at on Wellspring’s 2015 tax return when she is listed as the President.

Neil Corkery is likely not hurting for income. According to a 2015 report from the Center for Responsive Politics, Neil Corkery doesn’t put all of his eggs in one basket. The organization wrote:

“In fact, Wellspring and JCN are the tip of a nonprofit iceberg when it comes to the Corkery family. In 2012, tax records show that Neil Corkery was not only treasurer of JCN, president of its allied Judicial Education Project, and executive director of a charity called the Sudan Relief Fund, all of which paid him salaries; but he also drew paychecks from at least four other organizations: the anti-gay union National Organization for Marriage, ActRight Action, the Catholic Association Foundation, and Catholic Voices. His total earnings were almost $450,000, and his weekly workload was 105 hours in the first half of the year, the groups’ IRS filings show, before dropping back to a mere 80.”

As recently as August 2017, Ann Corkery was listed as “Of Counsel” at the law firm Stein Mitchell Cipollone Beato & Missner LLP. Even the Google-cached version of that page has now disappeared. Using the Internet Archive’s Wayback Machine, we found the following description of Ann Corkery at Stein Mitchell:

“Prior to joining the firm, Ms. Corkery served for ten years as senior advisor to the President and CEO of Security National Corp., which specializes in loan acquisition, servicing and real estate investment.  In this capacity, she handled a variety of complex business, legal, and policy matters for this national company.

“As an expert communication strategist with extensive knowledge of social and political issues, Ms. Corkery has had great success in devising and executing signature reputation campaigns for national political leaders and organizations. A collaborative partner in helping define policy priorities and positions, she has provided strategic counsel to a number of national and state political candidates and she has leveraged her media expertise and sources to shape campaigns and influence outcomes.”

Little has been ferreted out about the money behind the Judicial Education Project that is allied with JCN. We decided to see where it is getting its money. Since all of these Supreme Court related groups have their roots coming from the Charles Koch big money network, we went to a likely suspect for dark money related to Charles Koch: Donors Trust.

Sure enough, on the Donors Trust 990 publicly filed tax return for 2016, it listed 28 checks going to the Judicial Education Project, with a whopping total in just that one year of $9 million. But the peculiar thing is, the address listed for the Judicial Education Project on the Donors Trust tax filing was the personal home of Neil and Ann Corkery in Washington D.C.

According to public records, Neil and Ann Corkery sold that home in September of 2017 for $1,695,000. Zillow describes it as follows:

Like we’ve said before, serving corporate interests under the guise of conservatism makes for a very comfortable living in Koch’s America. (See related article below.)

Jay Sekulow: The Man Pumping the IRS Scandal on Network TV Sits At the Center of a Web of Nonprofits That Have Paid Him, His Family and Related Businesses $40 Million Since 1998